Tracking Hate, Then and Now 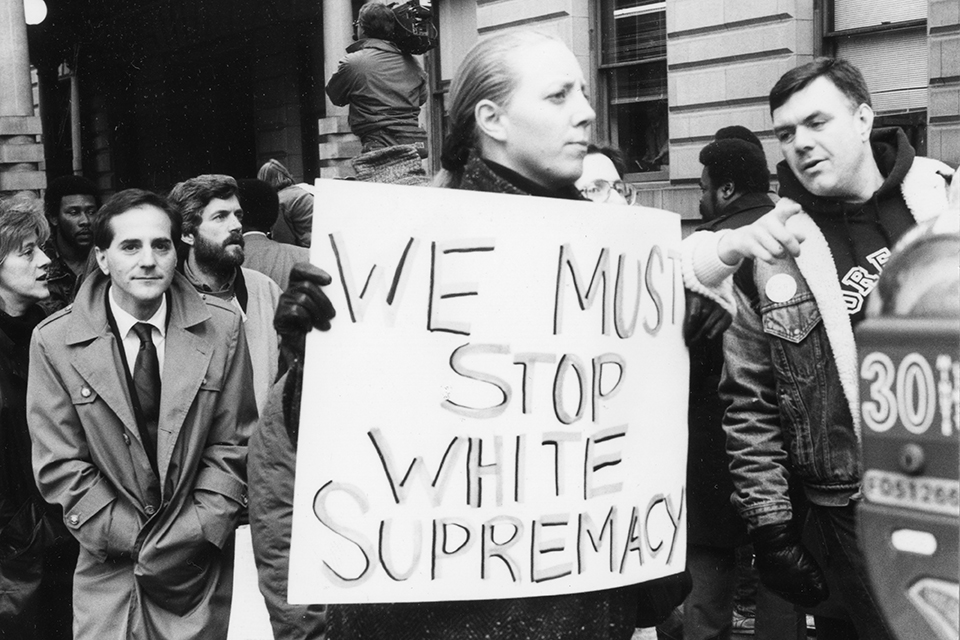 It’s difficult to read archived news stories about Mulugeta Seraw’s death without drawing parallels to 2018, where the Portland metro area is once again receiving national scrutiny for far-right activity, including last year’s stabbing death of two White men who stepped up to defend two Black teenage girls from a man who verbally accosted them with racist and anti-Muslim slurs.

Jeremy Christian, who is still awaiting trial for the murders but who confessed to them immediately after, had been in frequent attendance at Portland-area rallies organized by the Vancouver, Washington-based far-right group Patriot Prayer, which – among other things – organized a “March Against Sharia” in Seattle in 2017 and just this week came under police investigation after a member of its Facebook group posted a comment about burning down the offices of the Council of American-Islamic Relations, a Muslim advocacy group.

“There’s been kind of a rush to get a handle on the hate crime data of the moment. There’s no easy answer to say, ‘Are they up, are they down?’ There’s always kind of an asterisk next to hate crime data,” said Randy Blazak, a former sociology professor who in 1997 co-founded the Oregon Coalition Against Hate Crime.

In 1988 Oregon passed laws defining a bias crime as damaging property, threatening another person or subjecting them to offensive physical contact “because of the person’s perception of the other’s race, color, religion, sexual orientation, disability or national origin.” The state also passed a law requiring law enforcement to track bias-crime incidents that appears to slightly predate a federal law mandating reporting.

“Investigating intent is based on the suspect’s motivation,” said Portland Police Bureau Detective Jeff Sharp, who serves on the bureau’s bias crime team.

As Oregon Public Broadcasting reported last week, because the law is focused on the suspect’s intent, it creates a high burden of proof for reporting and prosecution. But different jurisdictions also report data in different ways. For example, Eugene takes reports on hate incidents that may not rise to the level of a crime.

Portland did too, once.

News stories from the immediate aftermath of Seraw’s death cite hate-crime statistics using reports from two information-gathering bodies apart from the police, one local and one regional. One – the Northwest Coalition Against Malicious Harassment -- is definitively defunct. The other – the Metropolitan Human Relations Coalition – appears to have been renamed, killed, shuffled from one bureaucratic home to another and revived. In its current incarnation – the Office of Equity and Human Rights -- it does not take hatecrime reports from the general public.

Also notable: in the 1980s the Portland Police Bureau’s Gang Enforcement Team had an officer dedicated to tracking White supremacist gangs. Sharp confirmed the bureau no longer has such an officer, instead folding such investigations under the umbrella of intelligence gathering. That is in part because the face of hate has changed.

“Some of these White supremacy groups are not obvious,” Sharp said.

“Tom Metzger, then and now, has been urging lone wolves. He told the skinheads, ‘Grow your hair out, get a job at a bank, join the military.’ And they did,” McElroy said.

So tracking hate incidents and hate groups – and stopping them – needs to focus on what happens online, McElroy said. The SPLC has been in communication with social-media companies about that, but it’s been a struggle, he said, noting Facebook is able to scrub 99 percent of pornography from the site, but not hate speech.

Local racial -justice advocates say the city’s response to the rising tide of hate has been about as anemic as that of Silicon Valley.

“When threats were made against Good in the Hood last year, it was stunning to me how little the city reacted – because people had the luxury of not reacting,” said Nkenge Harmon Johnson, CEO of the Urban League of Portland. “There were no police around to say, ‘Hey, let’s help you get a plan together,’ or to say, ‘You know what? We are going to come. The police unit’s going to march in this parade because we’re not going to stand for it. That just didn’t happen. And that’s not because folks don’t know what to do. It’s because they have the luxury of not doing it.”

In August The Skanner compiled a list of resources for those looking for a way to report hate crimes.