Palestinians Vow to Suspend Talks if US Closes PLO Mission 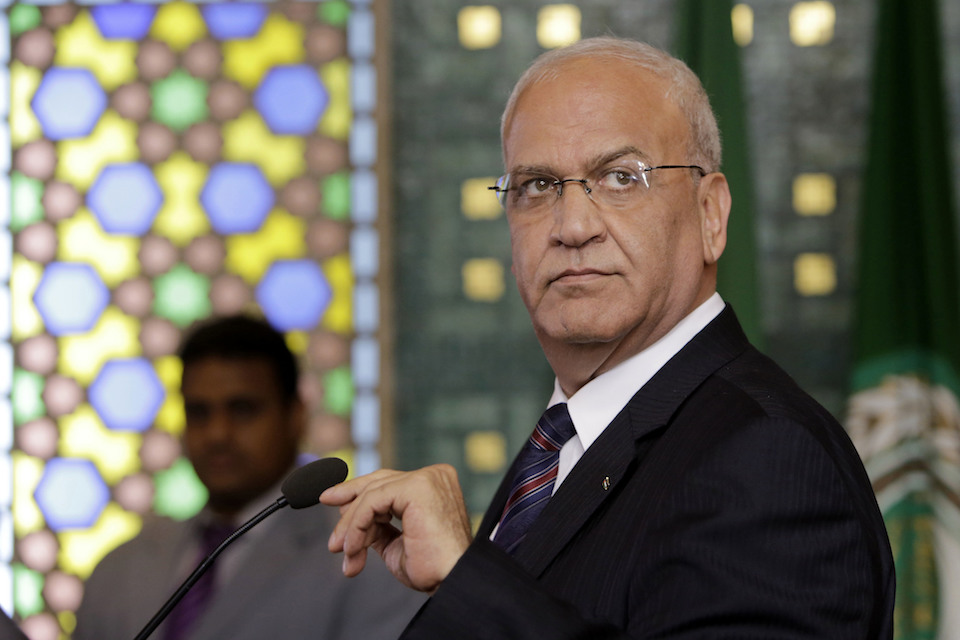 WASHINGTON (AP) — The Palestinians threatened on Saturday to suspend all communication with the United States if the Trump administration follows through with plans to close their diplomatic office in Washington.

The potential rupture in relations threatens to undermine President Donald Trump's bid for Mideast peace — a mission he has handed his son-in-law, Jared Kushner.

Senior Palestinian negotiator Saeb Erekat said the U.S. decision was "very unfortunate and unacceptable," and accused Washington of bowing to pressure from Israeli Prime Minister Benjamin Netanyahu's government "at a time when we are trying to cooperate to achieve the ultimate deal."

In a video statement on social media, Erekat said: "We will put on hold all our communications with this American administration."

There was no immediate reaction from the Trump administration. Netanyahu's office said the closure was "a matter of U.S. law."

U.S. officials had insisted before Erekat's statement that the move wasn't aimed at increasing leverage over the Palestinians, but merely the unavoidable consequence of U.S. law.

Cutting off ties would carry great risks for the Palestinians. It could antagonize an administration they already suspect is biased toward Israel and cut put millions of dollars of critical U.S. aid in jeopardy.

However, unresponsive Palestinians would deal an embarrassing blow to the Trump administration ahead of an expected peace initiative and potentially prevent it from getting off the ground.

Their stance could also complicate U.S. efforts to promote a regionwide approach by bringing together Israel with Saudi Arabia and other moderate Arab allies in a joint effort against Iran.

Arab countries might be reluctant to get too close to Israel in the absence of serious progress on the Palestinian issue.

The administration announced late Friday that the Palestinians had run afoul of a legal provision that says the Palestine Liberation Organization cannot operate a Washington office if the Palestinians try to get the International Criminal Court to prosecute Israelis for crimes against Palestinians.

Secretary of State Rex Tillerson determined that the Palestinians crossed that line in September, when Palestinian President Mahmoud Abbas called on the court to investigate and prosecute Israelis, according to State Department officials.

They weren't authorized to publicly discuss the situation and spoke on condition of anonymity.

It wasn't clear when the office would close or whether the Palestinians would have to clear out of the building entirely or just close it to the public.

Riad Malki, the Palestinian foreign minister, said he was told by the Americans that U.S. and State Department legal teams would meet Monday to decide how the new situation would affect the office, the functioning of diplomats and contacts with the Palestinians.

"We will wait to hear back from them," Malki said. After that, the Palestinians will decide how to react.

Under the law, Trump now has 90 days to consider whether the Palestinians are in "direct and meaningful negotiations with Israel."

If Trump determines they are, then the mission can reopen, officials said.

PLO official Hanan Ashrawi said the U.S. was "disqualifying itself as a peace broker in the region" by refusing to extend a waiver from the law.

"Conditioning the renewal of the waiver on the Palestinians' sticking to 'direct and meaningful negotiations with Israel' is actually superfluous since negotiations are nonexistent, and the current U.S. administration has yet to present any kind of peace initiative," she said in a statement.

The U.S. said it wasn't cutting off relations with the Palestinians and remained focused on a comprehensive peace agreement between Israelis and Palestinians.

One of the U.S. officials said in an email that "this measure should in no way be seen as a signal that the U.S. is backing off those efforts."

The Palestinians quickly dismissed that argument, with Malki telling Palestine Radio that the Palestinian leadership "will not accept any extortion or pressure." Erekat contended the move was the result of "the pressure being exerted on this administration by the Netanyahu government."

In response, the Israeli prime minister's office said, "We respect the decision and look forward to continuing to work with the U.S. to advance peace and security in the region."

The Israelis and Palestinians are not engaged in active, direct negotiations. But Trump's team, led by Kushner in his role as senior White House adviser, is working to broker a deal aimed at settling the intractable conflict.

The Palestinians, publicly supportive of the U.S. effort, are nonetheless skeptical because Trump's close ties to Israel suggest whatever deal he proposes might be unfavorable to them. The threat of losing their office in the American capital could become one more pressure point as the

Trump administration tries to persuade the Palestinians to come to the table.

The PLO is the group that formally represents all Palestinians.

Although the U.S. does not recognize Palestinian statehood, the PLO maintains a "general delegation" office in Washington that facilitates Palestinian officials' interactions with the U.S. government.

The United States allowed the PLO to open a mission in Washington in 1994. That required President Bill Clinton to waive a law that said the Palestinians couldn't have an office.

In 2011, under the Obama administration, the U.S. started letting the Palestinians fly their flag over the office, an upgrade to the status of their mission that the Palestinians hailed as historic.

Israel opposes any Palestinian membership in U.N.-related organizations until a peace deal has been reached.

The Trump administration has not disclosed details about its effort to achieve an agreement that ostensibly would grant the Palestinians an independent state in exchange for an end to its conflict with the Israelis.

Kushner and other top Trump aides have been shuttling to the region to meet with Palestinians, Israelis and officials from Arab nations.

The requirement about the mission closing stems from a little-noticed provision in U.S. law that says the U.S. cannot allow the Palestinians to have a Washington office if they back the international court's move to investigate or prosecute Israeli nationals for alleged crimes against Palestinians.

Abbas said at the United Nations in September that the Palestinians had "called on the International Criminal Court to open an investigation and to prosecute Israeli officials for their involvement in settlement activities and aggressions against our people."

The provision doesn't explicitly define what would constitute direct or meaningful negotiations.