By The Skanner News
Published: 08 February 2006 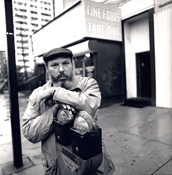 One day last September,playwright August Wilson called Kenny Leon, director of Wilson's final play, "Radio Golf." Wilson was ready to bring the show to Seattle, and the Seattle Repertory Theatre had changed its schedule to make it happen.


It was great news, Leon thought. Wilson had been suffering with liver cancer, but on the phone he was upbeat. In his adopted hometown of Seattle, family and friends from the theater world could be with him, perhaps for the last time.
Roughly 10 days later, on Oct. 2, 2005, Wilson died. Instead of a reunion, the Seattle Rep's current production of "Radio Golf" is an occasion for reflection about the playwright's life and his stunning 10-play cycle on Black life in the 20th century, one play per decade, perhaps the greatest achievement in American drama.


"The play has taken on a greater height of spirituality," Leon said. "He didn't make it. That was a painful thing, but it feels absolutely right that we are here. His family is here. His people are here."


"Radio Golf" played the Yale Repertory Theater and the Mark Taper Forum in Los Angeles last year to encouraging reviews. But this is its first production since Wilson's death, and his colleagues, used to watching him rewrite his plays as they made their way to Broadway, have continued without him, feeling a tremendous responsibility to do it justice.
"It's a very intimidating moment for all of us to realize that this is really the first foray after August's passing when a play of his is going through these stages," said Benjamin Moore, the Seattle Rep's managing director. "I'm sure that if he were with us he'd probably be rewriting to some degree. All we can do is make the very best result of the script that he left us."


Local reviews have been positive, with a Seattle daily calling it "a richly humorous play ... a warm, often wise and very angry work, which adamantly speaks to the way we live now." Another Seattle daily reported, "All of August Wilson's plays are full of eloquent speeches. 'Radio Golf,' however, is unique. It is full of eloquent listening."


As with many of Wilson's plays, the premise is simple, but the ethical questions that arise aren't: Two real-estate entrepreneurs (played by Rocky Carroll and James A. Williams) have a plan to redevelop the blighted Hill District in Pittsburgh, where Wilson grew up and set nine of his plays. Their plan — which includes an apartment complex, Whole Foods, Starbucks, and Barnes & Noble — hits a snag when a man named Old Joe (Anthony Chisholm) shows up claiming to own one of the vacant houses slated for demolition.


Wilson said he wrote his plays to explore the conditions created by the moral failure of White America and the effects those conditions had on Blacks. Through much of the 20th century, his plays suggest, the Hill District's residents had little but each other; their community was tight, if desperate. In "Radio Golf," the main characters have attained middle-class status, taken up golf and moved to ritzier neighborhoods, but they have also lost touch with their heritage, their families and their community.


The notion of community is central to Wilson's plays. Though they are dark, Moore suggests, they typically also have a redemptive quality, a future hope for a "sense of community that crosses all the boundaries, all the barriers that have over the years, over the centuries, interfered with the connectivity that we all in our hearts want to achieve."


Wilson himself was well known around his Capitol Hill neighborhood, where he lived with his wife, costume designer Constanza Romero, and their daughter. He could often be found at Victrola Coffee and Art or at Caffe Ladro on 15th Avenue East, chatting affably with patrons in his tweed cap or sitting outside smoking.


"August didn't drive," Moore said. "He moved on the surface on his own two feet. He was much more grounded in the community than most of us tend to be. We're all sort of fast-moving; the pace is not conducive to building relationships in the way that I think he did in this town."


At the same time, Moore said, Wilson was private. His longtime assistant, Dena Levitin, notes that when he moved from Minnesota to the West Coast 15 years ago, he picked Seattle in part because someone had recognized him during a trip to San Francisco. Later in life, he seemed less concerned with anonymity, she said.
The sense of community in his plays "stems from what he observed and what he knew living in the Hill District. That's something he very much valued," Levitin said.


"Like a lot of us, I think when we grow up we have a certain way we remember things. The reality may have been different, but that's what he took with him."


In 2003, Wilson helped the Seattle Rep celebrate its 40th anniversary by writing and acting a monologue called "How I Learned What I Learned," about growing up in the Hill District. When Wilson announced his illness last summer, the Rep bumped a production of Neil Simon's "Rewrites" until next season to make room for "Radio Golf."


On Feb. 13, the Rep will celebrate Wilson with a free, public performance of fragments of his work by actors from around the country.


"Our elementary school kids, our high school kids, our college kids, they should study August Wilson like they would Shakespeare. He put a face on American history," said Leon, who also directed Wilson's "Gem of the Ocean" on and off-Broadway.


"His other plays dealt with the need to move the community forward. Now, it's about not remembering the entire community. They're trying to hold on to their song. We haven't lost it yet. It's a beautiful way to end the cycle."
"Radio Golf" runs at the Seattle Rep. through Feb. 18. Tickets are $15 through $46. For ticket information, visit www.seattlerep.org.