US Vatican Cardinal: ‘Not Once Did I Even Suspect’ McCarrick 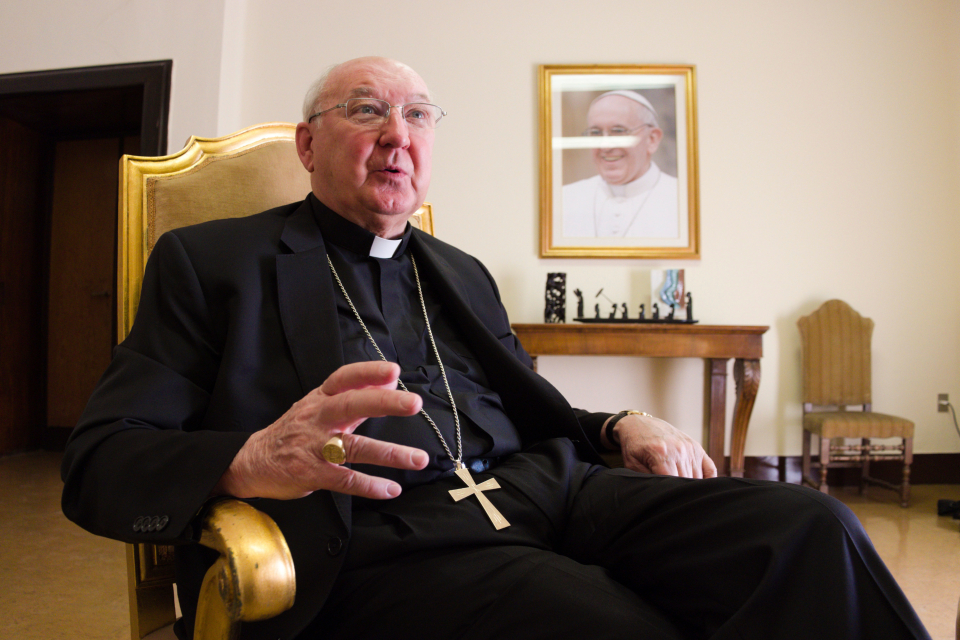 The highest-ranking American at the Vatican insisted Tuesday he never knew or even suspected that his former boss, disgraced ex-Cardinal Theodore McCarrick, allegedly sexually abused boys and adult seminarians, telling The Associated Press he is livid that he was kept in the dark because he would have done something about it.

Cardinal Kevin Farrell, head of the Vatican's family and laity office, spoke as the U.S. church hierarchy has come under fire from ordinary American Catholics outraged that McCarrick's misconduct with men was apparently an open secret in some U.S. church circles.

Pope Francis accepted McCarrick's resignation as cardinal on Saturday and ordered him to live a lifetime of penance and prayer pending the outcome of a canonical trial.

In an open letter Tuesday, a contributor to the conservative Catholic magazine First Things urged Catholics to withhold diocesan donations to the U.S. church until an independent investigation determines which U.S. bishops knew about McCarrick's misdeeds — a "nuclear option" aimed at making the laity's sense of betrayal heard and felt.

Some of that outrage has been directed at Farrell, who was consecrated as a bishop by McCarrick in 2001 and served as his vicar general in the archdiocese of Washington until McCarrick's 2006 retirement. Some Catholic commentators have speculated that Farrell must have at least heard the rumors that Catholic laity, students and professors at Catholic University in Washington and even some journalists had heard.

Farrell lived with McCarrick and other priests and bishops in a converted school building off Dupont Circle that serves as a residence for Washington clergy. But Farrell said he never heard any rumors about his boss' penchant for young men, or suspected anything, and was not McCarrick's roommate, as some bloggers have claimed.

"That might be hard for somebody to believe, but if that's the only thing on your mind, well then you'll focus on that. I was focused on running the archdiocese. What Cardinal McCarrick was doing here, there and everywhere and all over the world, didn't enter into my daily routine of running the archdiocese of Washington," he said.

"At no time did anyone ever approach me and tell me. And I was approached by over 70 victims of abuse from all over the United States after 2002," when the U.S. sex abuse scandal first erupted, Farrell said.

McCarrick, 88, was initially removed from public ministry on June 20 after U.S. church officials determined that an accusation that he fondled a teenage altar server in New York in the 1970s was "credible and substantiated."

Since then, another man identified only as James has come forward saying that McCarrick first exposed himself to him when he was 11 and then engaged in a sexually abusive relationship with him for the next 20 years. McCarrick has denied the initial accusation but has not responded to the second one.

At the time of McCarrick's June removal, the New Jersey archdioceses of Newark and Metuchen revealed that they had received three complaints from adults alleging misconduct and harassment by McCarrick and had settled two of them.

It was apparently no secret that McCarrick invited seminarians to his New Jersey beach house and into his bed, suggesting that some in the U.S. hierarchy knew of his abuse of power but turned a blind eye. Certainly the New Jersey bishops who handled the settlements in 2005 and 2007 would have known.

In addition, a group of concerned American Catholics reportedly traveled to the Vatican in 2000 to warn of McCarrick's misconduct, but he was still appointed Washington archbishop and made a cardinal in 2001.

As head of the most politically powerful U.S. archdiocese, McCarrick took a lead role in the U.S. bishops' 2002 response to the sex abuse scandal. He served as a spokesman when the bishops were summoned to the Vatican that spring and then helped craft the "zero tolerance" policy they adopted at a landmark congress in Dallas later that year.

That hypocrisy is what is driving the sense of betrayal among rank-and-file Catholics, and the anger they are directing at McCarrick's fellow bishops.

"Not only did they not produce what they promised, but we have a level of downright depravity that was right in their midst while they were making these promises," said Marjorie Murphy Campbell, a civil and canon lawyer in Park City, Utah, who has called for an independent investigation into the scandal.

On Monday, Catholic University of America revoked the honorary degree it gave McCarrick in 2006, following in the footsteps of Fordham University in New York. Bishop Michael Olson of Fort Worth, Texas, has suggested that McCarrick be defrocked and for all those in the hierarchy who knew to be held accountable "for their refusal to act, thereby enabling others to be hurt."

Farrell, 71, said he only met McCarrick after McCarrick arrived in Washington, where he was appointed archbishop in November 2000.

Farrell said he never expected to remain working in the Washington archdiocesan chancery because he wanted to get back to being a pastor at the Annunciation parish on Massachusetts Avenue. He said he turned down McCarrick's request that he give up the parish three times, but then was told by the Vatican ambassador that he was being made a bishop.

Farrell also said he didn't know anything about misconduct with seminarians at a New Jersey beach house and that no accusations against McCarrick were ever brought to the Washington archdiocese, which from 2002 onwards was deluged with claims from victims of sexually abusive clergy.

"If there were a complaint ... I would have discussed it with the (archdiocesan) chancellor, who was a woman at the time, a woman who was in charge of victims and in charge of all the telephone calls we would get," he said.

The current archbishop of Washington, Cardinal Donald Wuerl, has said that a review of archdiocesan records showed no complaints about McCarrick.

"There is no record there," Farrell told the AP. "Because I would know about it."

Farrell said that in retrospect, if he had known that McCarrick took seminarians to a beach house it would have raised a red flag. But he also recalled that when he was growing up, he played soccer with a priest-led squad, and that American priests used to regularly run retreats for young people.

"He didn't invite Washington seminarians there — that I would have known," Farrell said of the beach house. He also said that if the rumors about McCarrick were so well known, "it would have been looked at" by Vatican authorities who vet bishop nominations.

But McCarrick was an effective fundraiser even before he came to Washington, and the Vatican has a history of ignoring reports of sexual misconduct for clergy adept at bringing in donations and vocations.

Farrell said he didn't want to dwell on the McCarrick scandal anymore as he helps organize the Catholic Church's huge family rally in his native Ireland next month, which will be presided over by Francis. In a remarkable shift, it is being led by a 2-to-3 margin by laity.

Farrell said he understands the betrayal felt by ordinary Catholics over McCarrick.