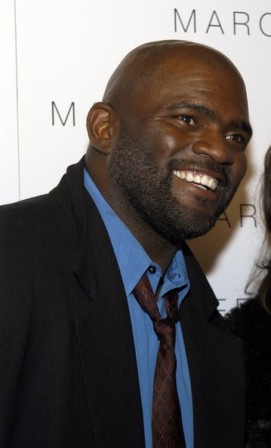 NEW YORK — Pro football Hall of Famer Lawrence Taylor was indicted Wednesday by a suburban New York grand jury on charges of third-degree rape and patronizing a prostitute.
The indictment follows his May 6 arrest at a Holiday Inn in Ramapo, N.Y., where prosecutors say he paid a 16-year-old girl $300 to have sex with him.
Taylor had been charged previously in Ramapo Town Court, but the indictment transfers the case to Rockland County. He is scheduled to appear July 13.
The former New York Giants linebacker also was indicted on charges of endangering the welfare of a child, and sexual abuse and criminal sexual act in the third degree. He faces up to four years in prison if convicted. He has denied the charges.
Rockland County District Attorney Thomas Zugibe said the 16-year-old told investigators that she had been verbally threatened and physically assaulted by a pimp who drove her 26 miles north to the hotel where Taylor was waiting.
"One of the most effective ways to target prostitution is to go after the johns," Zugibe said. "This indictment underscores our serious commitment to prosecuting those defendants who create a market for the region's growing sex trade."
Taylor's attorney reiterated his client's innocence Wednesday.
"Mr. Taylor and his legal team made a strategic decision not to present any evidence to the grand jury, including him testifying or any witnesses in his defense," said defense attorney Arthur Aidala.
The evidence includes sworn testimony by a 23-year-old woman who says she accompanied the accused pimp and the 16-year-old girl to the hotel where Taylor was staying. She said Taylor did not rape the girl. The teenager returned to the car with $300 in cash and said: "It was weird ... we didn't even have sex."
The statement was given to investigators working for the defense team and seen by The Associated Press on the condition she not be identified.
Taylor's longtime business manager, Mark Lepselter, said they were looking forward to the legal process "and Lawrence being able to move forward with his life."
A federal criminal complaint filed against the accused pimp, Rasheed Davis, recounts the victim's version of events and makes no mention of a third person in the vehicle at the time of his arrest in the Bronx. Davis has been charged in federal court with sex trafficking.
Authorities said the teen did not know whom she was meeting at the hotel room. The girl sent text messages to her uncle saying she was in trouble, police said. He called the NYPD, who arrested the suspected pimp once he returned to the Bronx with the teenager. The girl provided information about the hotel.
Taylor anchored the Giants' defense and led them to Super Bowl titles in 1987 and 1991. He was selected to the NFL's 75th Anniversary All-time Team.
A 10-time Pro Bowler, he was the NFL's MVP in 1986 and Defensive Player of the Year in 1981, 1982 and 1986.
The weight-loss company NutriSystem Inc. dropped Taylor as a spokesman because of his arrest.
Associated Press Writer Jennifer Peltz contributed to this report.