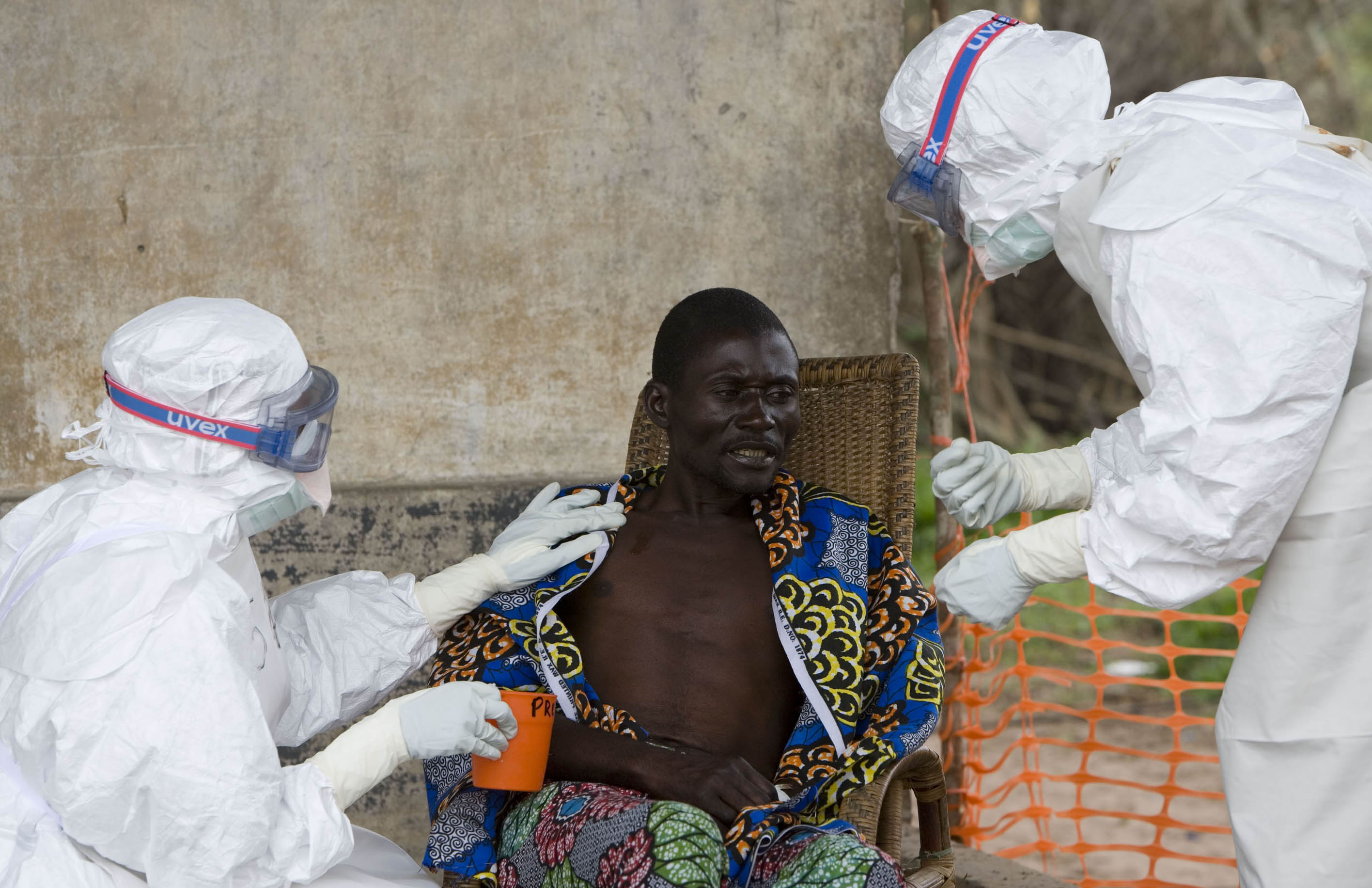 In this 2007, file photo, a 43 year old Congolese patient, center, who has been confirmed to have Ebola hemorrhagic fever, following laboratory tests, is comforted by Medecins Sans Frontieres (Doctors without Borders) nurse Isabel Grovas, left, and Doctor Hilde Declerck, right, in Kampungu, Kasai Occidental province, Congo. In the four decades since the Ebola virus was first identified in Africa, treatment hasn’t changed much. There are no licensed drugs or vaccines for the deadly disease. A number are being developed, but none have been rigorously tested in humans. One experimental treatment, though, was tried this week in an American aid worker sick with Ebola, according to the U.S-based group that she works for in Liberia. Without a specific treatment, doctors and nurses focus on easing the disease’s symptoms -- fever, headache, vomiting and diarrhea -- and on keeping patients hydrated and comfortable. (AP Photo/WHO, Christopher Black, File)

WASHINGTON (AP) — The use of an experimental drug to treat two Americans diagnosed with Ebola is raising ethical questions about who gets first access to unproven new therapies for the deadly disease. But some health experts fear debate over extremely limited doses will distract from tried-and-true measures to curb the growing outbreak — things like more rapidly identifying and isolating the sick.

The World Health Organization is convening a meeting of medical ethicists next week to examine what it calls "the responsible thing to do" about whatever supplies eventually may become available of a medicine that's never been tested in people.

At least one country involved in the outbreak is interested in the drug. Nigeria's health minister, Onyenbuchi Chukwu, said at a news conference that he had asked U.S. health officials about access but authorities say the manufacturer would have to agree.

There is no proven treatment or vaccine for Ebola, which so far has infected more than 1,700 people and killed more than 930 in West Africa in what has become the worst outbreak of this viral hemorrhagic fever.

"How many times have we found magic therapies that ended up ... doing more harm than good?" cautioned University of Minnesota professor Michael Osterholm, who advises the U.S. government on infectious disease threats.

"Vaccine and drug treatment right now is not going to be the main way you bring this to a stop," he added.

Scientists stress that there's no way to tell if the experimental drug ZMapp really made a difference for two American aid workers infected while working in Liberia.

"We don't even know if it works," stressed Dr. Anthony Fauci of the National Institutes of Health, which helped fund research that led to the drug's development.

The drug is a cocktail of three antibodies engineered to recognize Ebola and bind to infected cells so that the immune system can kill them. People's immune systems make antibodies to fight off various diseases, and attempts to cull those antibodies — from the blood of people who survive an illness, or from animals — date back to the 19th century and early diphtheria treatment. Using modern techniques to fight Ebola, scientists culled antibodies from laboratory mice, Fauci said, and ZMapp's maker now grows the antibodies in tobacco plants and then purifies them.

That process is "painfully slow," he added, saying the manufacturer has told the government that it would take two to three months to produce even "a modest amount."

"We've got to do better than that," Fauci said. The NIH and other government scientists are looking into ways to ramp up production, necessary to attempt formal testing or to consider more so-called compassionate use, he said.

"We're hoping the outbreak is going to die down soon, but it doesn't look that way," said Fauci, director of NIH's National Institute of Allergy and Infectious Diseases. "Everybody's trying to speed things up."

To help improve diagnosis in affected countries, the Food and Drug Administration on Wednesday authorized emergency use of an experimental blood test to detect Ebola. Early symptoms — fever, vomiting and diarrhea — can be confused with other illnesses. The test was developed by the Defense Department, and is only for use in DOD-designated laboratories.

This week, the WHO is convening an emergency committee to determine if the outbreak warrants being declared a "public health emergency of international concern," meaning it poses significant risk to other countries and requires more of an international response.

The WHO said that particularly in Liberia, health officials face community resistance from residents who fear going to the hospital and secretly care for ill loved ones at home, thus exposing themselves. Ebola is transmitted only through direct contact with the blood and other bodily fluids of someone who is sick.

But health care workers have to recognize the virus, too. Authorities in Nigeria have acknowledged that they didn't immediately suspect Ebola in the first known patient to travel to that country.

Only if they suspect the virus can authorities trigger public health precautions — those tried-and-true methods that Minnesota's Osterholm fears could be overshadowed by misunderstanding about any availability of the experimental drug.

"If the Americans had this serum all the time, why didn't they send it to us Africans to help save lives?" said Winston Ojukutu Macauley, a social commentator in Sierra Leone.

But taking an experimental drug requires making sure the patients fully understand there's no proof it will help — and it might even harm, said Osterholm, noting that 40 percent of Ebola patients are surviving. And would it be appropriate for the U.S. to offer a drug to people in developing countries that hasn't been tested on its own citizens?

That's among the things the WHO meeting could address. Even if enough doses were available for wider experimental use, "we need to find a way to do this in a fair manner so that we can live with ourselves when someone asks why this person got it and why not that person?" said Dr. Heinz Feldmann, NIAID's virology chief.