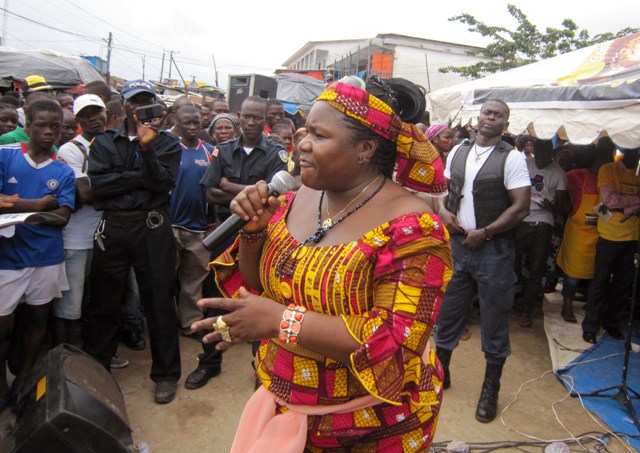 In this photo taken on July 8, 2014, Ebola advocacy group Crusaders for Peace, spokesperson Juli Endee, center, educates people on the deadly virus in Paynesville, east of the city Monrovia, Liberia. Ebola, a hemorrhagic fever that can cause its victims to bleed from the ears and nose, had never before been seen in this part of West Africa where medical clinics are few and far between. The disease has turned up in at least two other countries -- Liberia and Sierra Leone -- and 539 deaths have been attributed to the outbreak that is now the largest on record. (AP Photo/Jonathan Paye-Layleh)

President Ellen Johnson Sirleaf described the measures late Sunday after the first meeting of a new taskforce she created and is chairing to contain the disease, which has killed 129 people in the country and more than 670 across the region.

A top Liberian doctor working at Liberia's largest hospital died on Saturday, and two American aid workers have fallen ill, underscoring the dangers facing those charged with bringing the outbreak under control.

Last week a Liberian official flew to Nigeria via Lome, Togo and died of the disease at a Lagos hospital. The fact that the official, Patrick Sawyer, was able to board an international flight despite being ill raised fears that the disease could spread beyond the three countries already affected — Liberia, Guinea and Sierra Leone.

There is no known cure for Ebola, which begins with symptoms including fever and sore throat and escalates to vomiting, diarrhea and internal bleeding. The disease spreads through direct contact with blood and other bodily fluids as well as indirect contact with "environments contaminated with such fluids," according to the World Health Organization.

"No doubt, the Ebola virus is a national health problem," Sirleaf said. "And as we have also begun to see, it attacks our way of life, with serious economic and social consequences."

Sirleaf said all borders would be closed except for three — one of which crosses into Sierra Leone, one that cross into Guinea and another that crosses into both. Experts believe the outbreak originated in southeast Guinea as far back as January, though the first cases weren't confirmed until March. That country has recorded the most deaths, with 319. Sierra Leone has recorded more of the recent cases, however, and has seen 224 deaths in total.

Liberia will keep open Roberts International Airport outside Monrovia and James Spriggs Payne Airport, which is in the city.

Sirleaf said "preventive and testing centers will be established" at the airports and open border crossings, and that "stringent preventive measures to be announced will be scrupulously adhered to."

Other measures include restricting demonstrations and marches and requiring restaurants and other public venues to screen a five-minute film on Ebola.

Sirleaf also empowered the security forces to commandeer vehicles to aide in the public health response and ordered them to enforce the new regulations.

In Sierra Leone, President Ernest Bai Koroma announced Monday he was heading to the east of the country to visit the country's top Ebola doctor who became infected with the disease last week. Officials have said the doctor, Sheik Humarr Khan, has been responding well to treatment at a center run by Doctors Without Borders in the town of Kailahun. Khan has been described as a national hero for his work fighting the outbreak.

Koroma made the announcement at the National Stadium in Freetown, where he joined Muslims in prayers to mark the Eid el-Fitr holiday.