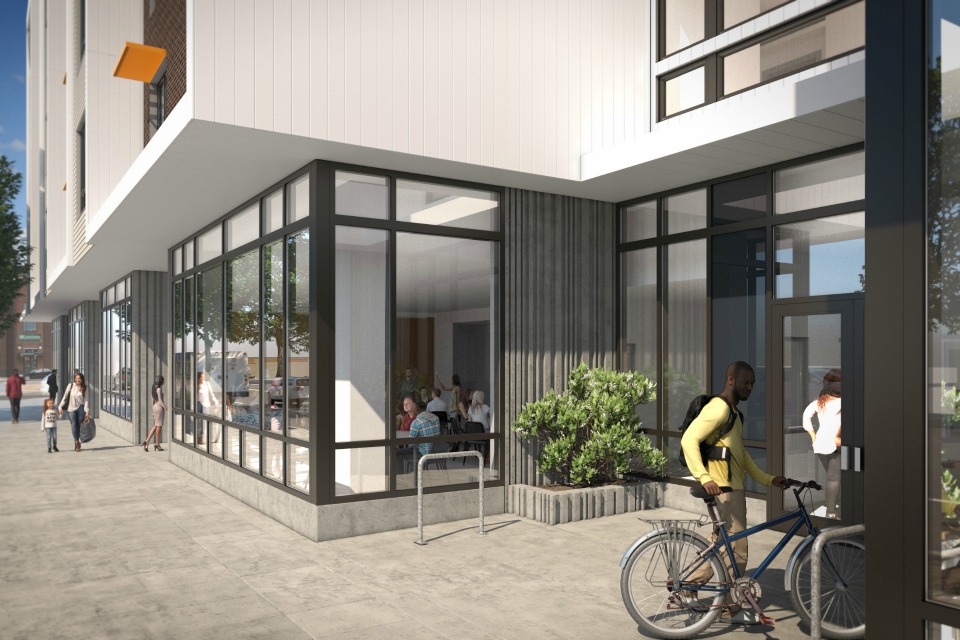 Displaced victims of gentrification could be returning to their old Northeast neighborhood, if a new affordable housing project proves successful.

Called Beatrice Morrow, the building is slotted for the site of the former Grant Warehouse, on NE Martin Luther King Jr Blvd, between Cook and Ivy Streets.

Its name honors the Portland attorney and civil rights activist Beatrice Morrow Cannady, who ran for the state legislature in 1932 – becoming the first African American in state history to do so. Cannady was also the publisher of the Advocate, Oregon’s largest African American newspaper at that time.

The 80-unit housing project received a $7.35 million loan from the Interstate Corridor Urban Renewal Area fund; while the Portland Housing Bureau, which owns the site, is pitching in the land’s value – appraised at $4.1 million.

Based on 2016 incomes, that puts rents roughly at $350 to $1060 per month, depending on the number of bedrooms. More than 6,000 square feet on the ground will be allotted commercial space.

PCRI said construction is scheduled for May 2017, after financing is closed.

Beatrice Marrow will also be the first city-funded project to use Portland Housing Bureau’s “preference policy” to prioritize rental homes for previously-displaced residents.

Put forward in 2015 to mitigate the marginalization and displacement of historic residents, the policy gives first dibs on housing developments to families and their ancestors – African Americans, in particular – who were ousted from their North and Northeast neighborhoods by urban renewal.

“Those were the areas that African Americans were forced to live in, because they weren’t allowed to live elsewhere,” Travis Phillips, director of housing development at PCRI, told The Skanner. “And yet at the same time they did not have access to conventional mortgage loans in order to buy their properties. So once the neighborhood turned and rents started getting more expensive, we know they’re the vast majority of folks that got displaced.”

The preference policy falls under the city’s 2015 North/Northeast Housing Strategy, which lays out how $20 million in funds from the Interstate Corridor Urban Renewal Area will be allocated for affordable housing, in an effort to atone for the sins of gentrification.

Portland’s North and Northeast areas lost around 800 African American residents between 2012 and 2014, but the exodus started decades before. As early as the 1950s and 60s, Portland began adopting urban planning policies that demolished older, predominately African American neighborhoods in the name of revitalization, forcing members of the Black community to relocate.

Attempts have since been made to bring them back, but none proved prosperous.

Last autumn, with over $600,000 in subsidies, the Portland Housing Bureau constructed the Jarrett Street Lofts off of North Interstate Avenue to attract displaced Black residents by prioritizing them for homeownership.

But at 387 to 556 square feet, the developers struggled to fill the micro-condos with families. The Jarrett Street Lofts are no longer participating in the preference policy process.

“The challenge with the Jarrett Street project is that it’s a unique demographic that’s drawn towards that housing type as their first choice,” said Martha Calhoon, public information officer at the Portland Housing Bureau. “For larger families, it’s not necessarily going to work for them.”

Calhoon predicts a different fate for the Morrow complex, which is rental only.

“To apply and be accepted for rental housing is a much lower barrier and quicker process than becoming mortgage ready,” she said. “As we begin advertising rental properties and open application periods for preference points, I expect there to be pretty high demand.”

By comparison, the Housing Authority of Portland (now Home Forward) successfully revitalized the Columbia Villa, a 462-unit complex originally built in North Portland in 1942 as housing for World War II shipyard workers. By the 2000s, the complex failed to meet modern building standards, and its 1,300 low-income residents were increasingly isolated from the community – geographically, socially, and economically.

But with a $35 million grant from HUD, supplemented by additional funding, HAP constructed the New Columbia, an 854-unit, mixed housing complex on the old site.

By the end of 2003, HAP had relocated almost 400 households of the Columbia Villa, with 29 percent of former residents returning to the new complex. Eighty-six percent of respondents said they were either very or somewhat satisfied with their relocation.

According to Phillips, PCRI is still ironing out the kinks in the preference policy process for Beatrice Morrow, but applications are accepted to include both paper and online portions. Filing assistance for applicants will likely be provided by PCRI and Portland Housing Bureau staff.