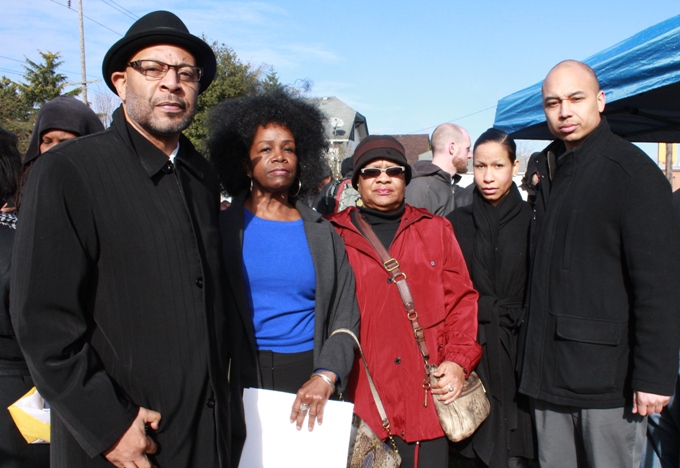 Trader Joe's has pulled out of the planned development at N.E. Martin Luther King Jr. Boulevard at N.E. Alberta Street in Portland. Yet it was just last Friday that Andrew Colas of Colas construction promised to hire a diverse, local workforce to build the project.

In a statement, Trader Joe's said it wouldn't go forward because of  neighborhood opposition.

“We think the Vanport Square area in Northeast Portland is a great neighborhood and we had been interested in opening a store there,” the company said in statement.

“Given negative reactions from the community—about our arrival, we will not be opening a store in the area….We run neighborhood stores and our approach is simple: if a neighborhood does not want a Trader Joe’s, we understand, and we won’t open the store in question.”

At noon Monday the Portland African American Leadership Forum held a press conference where they explained why they opposed the original development plan, rolled out a set of four demands, and announced a series of visualization meetings to gather community input, from existing neighbors, but also specifically from people who were forced to move because of gentrification.

“This has never been about one company,” said Steven Gilliam, one of five speakers at the press conference.  “We’re about community solutions and providing a mitigating effect for displacement.”

About 10,000 African Americans have left traditionally Black neighborhoods in North and Northeast Portland because of gentrification, Gilliam said.

“This doesn’t disqualify Colas from any projects in the future and hopefully we can work with all minority contracting firms to make sure that money spent by city goes to benefit those that need it the most.”

Tony Hopson, PAALF co-chair and executive director of the education nonprofit Self Enhancement Inc. urged reporters and the public to read up on the impact of gentrification and racism in Portland. Hopson cited the Urban League of Portland’s 2010 State of Black Oregon report, the recently released Communities of Color report on Portland’s African American community, and the other communities of color reports.

“We are here today to move the action down the field,” he said.

Former Sen. Avel Gordly said she is a 67-year resident of Portland.

“Gentrification is the forced removal and population replacement from land, of one group of people by another,” Gordly said. "Gentrification is a process, not just an event. It is intentional and planned, with specific policies, programs and development decisions, used to accomplish the objective of moving one group of people out, and another group of people in. Specifically in Portland, this resulted in the forced removal of African Americans and other low-income groups from inner North and Northeast Portland to the outskirts of the city, while middle- and upper-income Whites moved in.

“The City of Portland and the Portland Development commission have a history of broken promises and backroom processes that have resulted in the gentrification of African Americans and our community has suffered.”

1. A full accounting of tax increment financing (urban renewal) in the Interstate Urban Renewal and Oregon Convention Center areas, to include all funding recipient names and amounts.

“ PDC has taken too long to fulfill promises to many of us and they should actively undertake restorative policies in order to make right on those promises,” Fitzpatrick said.

3. A legally enforcable community benefits agreement --negotiated by an independently controlled community body --to ensure the employment of African Americans and other community members.

Fitzpatrick also said the group hopes that affordable housing will be built on the site and made available to displaced former residents.

Cyreena Boston, PAALF co-chair said the group believes, ”development in the Interstate Corridor Urban Renewal Area and by extension, all development, should serve the needs of the diverse communities that live in it, especially low-income people, people of color and immigrant communities.

“These communities must be central to the decision making process about the development and management of their neighborhoods.

“Beginning this month, PAALF will host community visioning sessions that will bring together neighbors and community members who have been displaced to determine what outcome they would like to see for this property, and other city of Portland owned vacant lots – be it housing, a grocery store, retail space or a community center.”

The controversial development drew fire after the Portland Development Commission announced it had sold the land to developer Majestic Realty for $2.4 million less than its appraised value. Protesters also disagreed with the city’s claim that the neighborhood is a food desert that needed a grocery store.

In a statement, Mayor Hales and the Portland Development Commission said they intend to work with both supporters and opponents of the plan to find a development plan that works. They said the plan had been the result of two years of focused work to find a developer for the land.

“In all, we view today’s news as a loss for the city and particularly for Northeast Portland,”  the statement reads.

“We are grateful for the effort that Colas Construction, a local, minority-owned construction company, put into making this project happen and we recognize all the hard work Majestic Realty has invested in this effort over the past two years. “

The PDC has said the land was valued as a potential commercial site, and would be worth less as affordable housing.

Before 2008 a movie theater was sited on the land.

The loss of the anchor tenant for the site now puts a question mark over the entire development.  Calls to Majestic Realty were not answered by press time.  The Skanner News also asked Trader Joe’s if economic factors had also played into their decision to withdraw, but a representative for the store declined to elaborate on its press release.