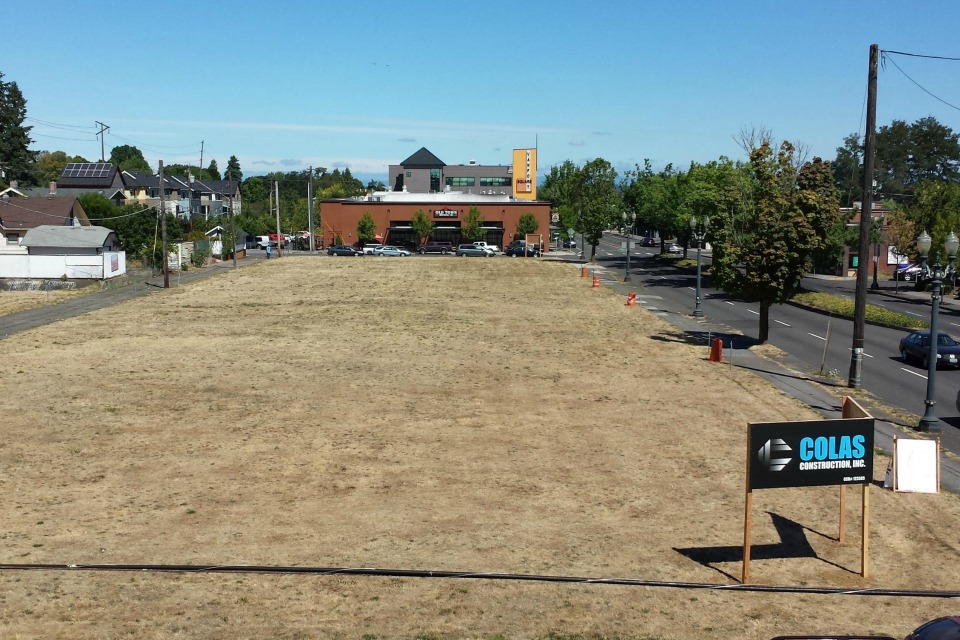 In early 2014, it seemed as though the long-vacant lot at the intersection of Northeast Martin Luther King Jr. Blvd. and Northeast Alberta Street would remain in purgatory, after Trader Joe’s pulled out from negotiations amid community backlash.

Critics of the grocery store deal, namely the Portland African American Leadership Forum (PAALF), felt the Portland Development Commission (PDC), which owns the lot, was only furthering gentrification and displacement in the once-predominately Black neighborhood.

PAALF, backed by a wealth of local activists, saw the lot as a ripe opportunity to build much-needed affordable housing in the MLK corridor, which has experienced a decline in its African American population.

But by mid-2015, the PDC had finalized a deal with the California-based developer, Majestic Realty Co., who purchased the land for just over $500,000 – about $2.4 million under the appraised market value.

After securing the Colorado-based Natural Grocers as the new anchor tenant – and a reshuffling of optimistic timelines that fell short by about a year – the hammers have finally fallen at the site, just weeks ago.

Colas Construction, an African American family-owned company, is on board as the development’s prime contractor. “We’re tracking at about 50 percent minority business participation overall,” said Andrew Colas, president and COO. “That’s pretty unprecedented for a project of this size and this nature. Not only are we getting the opportunity, but we’re bringing a whole bunch of other minority sub-contractors and businesses along for the ride,” Colas said.

Called Alberta Commons, the new development will dedicate 50 percent of the lot’s commercial space as affordable for up to six or seven local minority businesses.

The city-subsidized project holds through a 10-year master lease agreement with the PDC and rounds out the third phase of the commission’s Vanport Redevelopment. Phase I and II resulted in Vanport Square, a cluster of retail shops and small businesses, and a string of single family homes.

“All the minority and small business owners located at Vanport Square are excited to see this site finally getting developed, after years of controversy and delays,” said Jeana Woolley, secretary of Black Investment Corporation for Economic Progress Inc., a group that engages in socially responsible commercial development in Portland’s North and Northeast neighborhoods.

For some Black community members and business professionals, Alberta Commons will be the culmination of what they’ve long wanted in the area, regardless of past disputes over a viable grocer.

“To continue the economic development opportunities in the district, it didn’t matter what the anchor was, as long as there was some retail space that we could depend upon for minority businesses,” said John Washington of the North NorthEast Business Association, and chair of public art for Alberta Commons.

While the planning process has been arduous, Washington said it’s also been an exercise in community engagement. Forgoing city steering that offers little transparency, Alberta Commons has relied on neighborhood input to drive the project.

With just over 5,000 square feet of commercial space at their disposable, the team behind the project – a mix of businesses owners, PDC personnel, community organizers, architects and artists – is seeking “businesses that not only culturally engage the community, but provide a service that’s cost efficient, cutting edge, and lends credibility,” said Washington.

While the tenants are yet to be decided, among the types of retail businesses the Commons is vying for are restaurants and clothing shops.

“Obviously the emphasis is going to be on entrepreneurs of color,” said PDC’s Tory Campbell, who co-chairs the project’s retail tenanting committee. “But even within that, (we’re looking for) the ideal mix of business and themes to make sure that there’s synergy.”

Campbell is also involved in a broad outreach strategy. “We want to make these spaces available to as many businesses as possible that are currently located in the area, have perhaps been displaced, or would like to come and do business on the MLK corridor.”

BICEP, too, is working closely with the PDC as an adviser on the tenant process. The group is known for The SOUL District, a strategy that aims to reclaim and redevelop parts of North and Northeast Portland for Black businesses and programs. For Jeana Woolley, the two projects share common goals.

“We do believe there's opportunity to recruit and locate the kind of Black entrepreneurs and businesses for (Alberta Commons) that BICEP's interested in showcasing as part of the SOUL District,” said Woolley.

And a large part of showcasing local businesses will be through commissioned public art. Since getting involved in development, John Washington said he’s recognized the critical role design plays in supporting commercial business.

“Architectural design sets precedence for the future engagements of the community,” said Washington. “It holds the potential to be communication to the outside world about what that community is all about.”

As murals are often too temporary a medium in the face of gentrification, Alberta Commons has sought more permanent fixtures. Instead of wall paintings, the public art subcommittee is commissioning large, bona fide art pieces on porcelain panels.

While Alberta Commons is scheduled for completion in fall 2017, just one mile south, Colas Construction is leading an affordable housing development of roughly 80 units between Northeast Cook and Ivy Streets. The Grant Warehouse development, on the grounds of a  former chemical storage facility, is taking $4.5 million from an urban renewal fund slated for affordable housing .