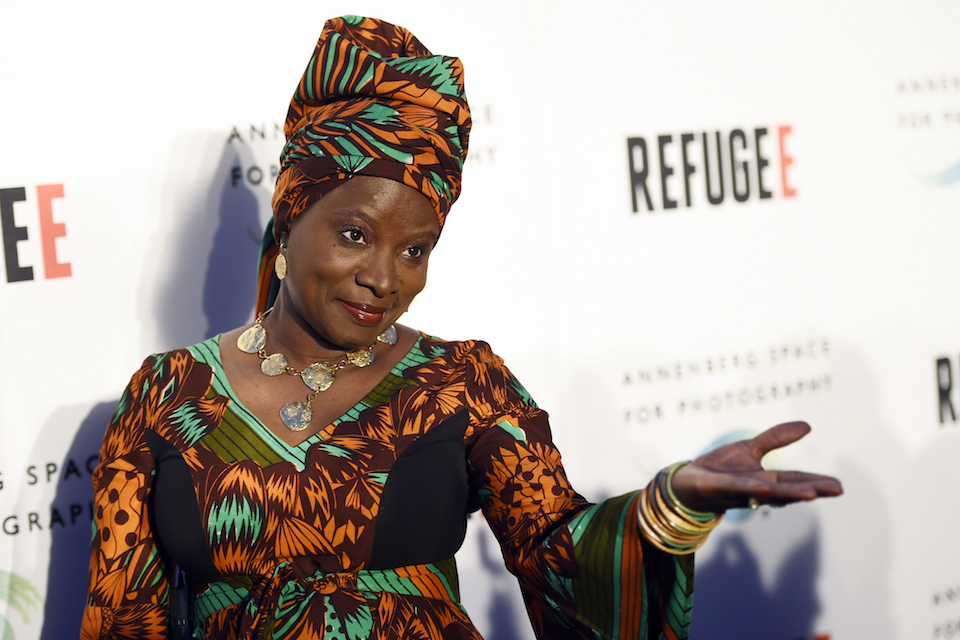 JOHANNESBURG (AP) — The insect-eaten money fluttered in pieces to the floor. For global music star Angelique Kidjo, that image of her grandmother having to use a closet as a bank is driving her desire to see African women leap the many obstacles to obtaining credit — and respect.

The Benin-born singer, one of Africa's iconic artists and a collaborator with Philip Glass and others, is the voice of a new project aimed in part at rewriting laws across the continent that prevent millions of women from becoming a more powerful economic force.

In an interview with The Associated Press, Kidjo described what she has seen over decades of travel in Africa during which women in vibrant marketplaces wished they had the means to do more.

"Why do banks give more loans to men versus women? That's the question I have," she said.

"Millions of women entrepreneurs in Africa, they lack loans versus the men. Once again, we come back to this patriarchy. And we know men pay less back than women."

Every time credit is refused to African women, who invest some 90% of what they earn in educating their children and supporting families and communities as opposed to about 40% for men, it's a disaster, Kidjo said.

"We're taking up reducing the poverty rate in Africa to the smallest number ever. That's my passion. That's why I'm here."

She will help the African Development Bank next week launch AFAWA, or Affirmative Finance Action for Women in Africa. Already the G-7 group of the world's major democracies has committed $250 million, and the bank is providing $1 billion for the project that will be deployed across all 54 countries.

The goal is to raise $5 billion for efforts that include helping to guarantee loans, training women on financial matters and eliminating laws and regulations that make accessing credit more difficult. African women face a $42 billion financing gap even though one in four starts or manages a business, the highest percentage in the world, the bank says.

In some African countries, women can't open a bank account without their husband or father, or inheritance laws leave them with little or nothing. That means no collateral.But reforms are catching on. In the World Bank's latest Women, Business and Law report in 2018, 32% of reforms tracked in sub-Saharan African countries addressed equal treatment for women and men in accessing credit and financial services. Angola, Congo and Zambia joined others in prohibiting gender-based credit discrimination, it said.

With the new fund for financing African women "we will be able to go as low as a few hundred dollars' loan ... for people who need it the most," said Vanessa Moungar, the African Development Bank's Chadian-French director of gender, women and civil society.

She was not ready to announce further pledges but said talks are continuing with potential donor countries, including African ones. With the continent's 1.2 billion population expected to double by 2050, the pressure for growth is huge.

"Look, women are one of the most powerful forces of nature on this continent," Moungar said.

"If they can be economically empowered, transformation will be fast-tracked like we've never seen."

Launching along with the new financing project is an index to assess how commercial banks are performing.

"When they come to us for more (loans) we'll say, 'What have you done for women?'" Moungar said.

The project is also turning accountability on itself, with Kidjo and other ambassadors meant to speak up if they think the project isn't moving quickly or effectively enough.

True, Kidjo said. "I'm not a very patient person. Those women, they don't have time to waste. Their livelihood is in danger. I'm gonna be very strict."

Women across Africa have told her they don't want charity, the singer said. They know how to make money but aren't given the chance to try.

She recalled women in Ghana who resorted to digging a hole in the ground to stash their earnings because they didn't have bank accounts. And during a visit to Benin last month, one woman told her that to obtain a loan of 5,000 CFA ($8) she had to show a property deed and hand over 100,000 CFA as collateral.

Such experiences have helped to inspire another new program, the $100 million U.S.-run Women's Global Development and Prosperity Initiative fund with projects in 22 countries in Africa and elsewhere.

They include Morocco, where women are benefiting from new laws that allow them to own land.

The Africa-focused AFAWA, with vocal backing from French President Emmanuel Macron, will launch this month in Rwanda at the Global Gender Summit, which gathers multilateral development banks from around the world.

When that East African nation changed its laws to give women access to land, their financial inclusion jumped from 36% to 63% in just four years, Moungar said.

"Can you imagine?" she said. "I want all the women out there to know that's what's really driving us and our hearts. We are working for them and nothing else."