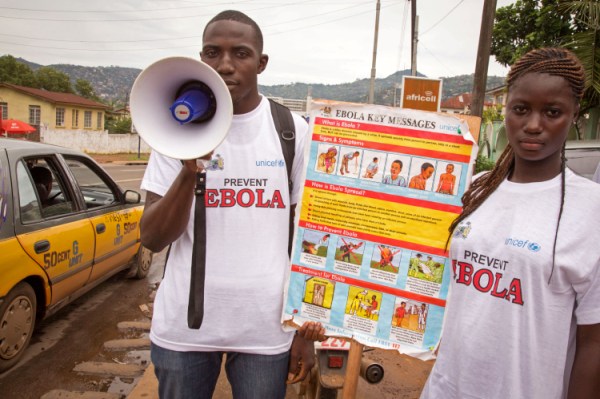 PHOTO: A man and woman taking part in a Ebola prevention campaign holds a placard with an Ebola prevention information message in the city of Freetown, Sierra Leone, Wednesday, Aug. 6, 2014. The World Health Organization has begun an emergency meeting on the Ebola crisis, and said at least 932 deaths in four African countries are blamed on the virus, with many hundreds more being treated in quarantine conditions. (AP Photo/ Michael Duff)

MONROVIA, Liberia (AP) — Soldiers clamped down on people trying to travel to Liberia's capital Thursday from rural areas hard-hit by the Ebola virus hours after the president declared a national state of emergency.

Reports have emerged of families hiding sick relatives at home and of abandoned bodies being left in the streets.

Similar efforts were underway in eastern areas of neighboring Sierra Leone after officials there launched "Operation Octopus" to try and keep those sick with Ebola in isolation. While the outbreak has now reached four countries, Liberia and Sierra Leone account for more than 60 percent of the deaths, according to the World Health Organization. The outbreak that emerged in March has claimed at least 932 lives.

In announcing the 90-day state of emergency, Liberian President Ellen Johnson Sirleaf said the worst recorded Ebola outbreak in history requires "extraordinary measures for the very survival of our state and for the protection of the lives of our people."

"Ignorance, poverty, as well as entrenched religious and cultural practices continue to exacerbate the spread of the disease especially in the counties," Sirleaf said late Wednesday.

She warned that some civil liberties could be suspended as needed, and by Thursday soldiers already were restricting movements on the roads to the capital, Monrovia, witnesses said. Some soldiers were deployed to the crossroads town of Klay about 25 miles (40 kilometers) west of Monrovia in an effort to stop people from three Ebola-infected counties from coming closer to the capital.

Yet even as authorities tried to keep more people from reaching Monrovia, the capital already has been hard hit by the virus.

National Health Workers Association president Joseph Tamba said the state of emergency is necessary. But he says people should have been given advance notice to buy food ahead of the movement restrictions.

—A Spanish missionary infected by Ebola was in stable condition after being flown to Spain from Liberia Thursday, health officials in Madrid said. Miguel Pajares, 75, had been helping to treat people infected with Ebola and was one of three who tested positive at the San Jose de Monrovia Hospital in Liberia earlier this week. Juliana Bohi, an Equatorial Guinean nun with Spanish nationality who worked with him in Liberia, was also brought back but she is not infected.

—Zimbabwe President Mugabe is considering withdrawing Zimbabwean soldiers, police and prison officers serving as U.N. peacekeepers in Liberia because of the Ebola outbreak, Zimbabwe's state-run Herald newspaper reported. "We must not expose ourselves unnecessarily," Mugabe was quoted as saying. Peacekeepers are in Liberia until elections in 2017.

—The World Health Organization is holding talks this week on whether to declare an international health emergency.

Previous outbreaks of the Ebola virus were limited to parts of Congo and Uganda, far from the capital cities in those countries.