Special to the NNPA from the Afro-American Newspapers
Published: 16 August 2009 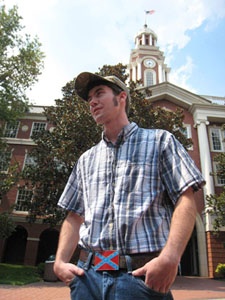 A federal judge last week threw out a free-speech lawsuit brought by a former Tennessee high school student who wore clothing bearing the Confederate flag.
Tommy Defoe sued after he was sent home and then suspended for insubordination in 2006 for wearing a T-shirt and belt buckle with the flag to Anderson County High School outside Knoxville, Tenn. Defoe claimed he wanted to display pride in his Southern heritage.
The case was tried a year ago and ended with a hung jury. A new trial had been scheduled, but in his decision U.S. District Judge Tom Varlan cited a federal court ruling which upheld a Confederate flag ban resulting from a case in nearby Blount County. Varlan said in his decision that Defoe's free-speech rights to display the Confederate battle flag in 2006 were properly limited by school officials who "reasonably forecasted a material and substantial disruption to the school environment" if the clothing was permitted.
"We're going to provide a dress code that is conducive to learning and that it will not bring attention to one individual or a group of individuals," Larry Foster, Anderson County School Superintendent, told a local Tennessee TV station.
However, in the Blount County case, racial tensions led to a fight and a school lockdown, Defoe's attorney, Van Irion, told the TV station.
"We came close to winning at the last trial and this ruling is essentially saying you have no chance of winning," Irion said. "We are stunned."