Takeaways From the Democratic Presidential Debate 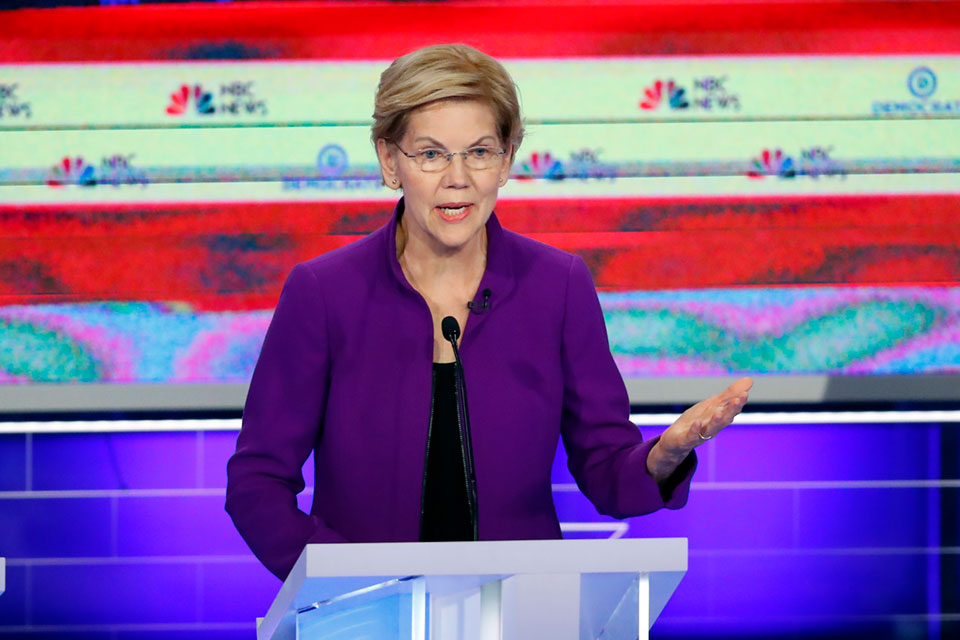 MIAMI (AP) — Democrats hoping that Wednesday night's first presidential debate of the 2020 campaign would be clarifying probably came away disappointed. There were no major stumbles but few standout moments as 10 candidates vied for the nation's attention.

Takeaways from the prime-time event:

Massachusetts Sen. Elizabeth Warren dominated the debate's opening moments, calling for systemic change to the nation's economy and the end to the private insurance system.

Warren was the highest-polling candidate on stage and NBC moderators repeatedly tried to draw her rivals into challenging her liberal policies. But they largely passed on those opportunities, even when Warren was virtually alone in her stance on overhauling the health care industry.

Former Housing and Urban Development Secretary Julian Castro, who has struggled for months to break through in the crowded field, asserted himself as a leader on immigration, an issue sure to be at the forefront of the general election campaign against President Donald Trump. He challenged his rivals to join him in rewriting immigration laws so the mere illegal entry into the United States would no longer be a federal crime.

The question is whether Warren and Castro's performances still stand out after night two of the Democratic debate on Thursday, when former Vice President Joe Biden and nine other candidates take the stage.

Whose Economy Is It Anyway?

The debate kicked off with moderator Savannah Guthrie asking Warren if her many ambitious plans — free college, universal child care and health care — would hurt a booming economy.

"Who is this economy really working for?" Warren replied. "It's doing great for a thinner and thinner slice at the top."

It was soft toss of a question to Warren, and her response was echoed by other Democrats.

Former Rep. Beto O'Rourke of Texas slammed Trump's tax cut as part of "an economy that is rigged to corporations and to the very wealthiest."

And Rep. Tim Ryan, who represents several declining industrial areas in Ohio, said, "This issue we're talking about has been going on for 40 years."

Only former Rep. John Delaney of Maryland clearly disagreed and said many of Warren's promises were not realistic.

How Far On Immigration?

No issue in the first Democratic debate showcased the contrast with Trump more than immigration. But the issue also exposed significant rifts among his challengers — namely the two Texans on the stage.

Castro took sharp aim at O'Rourke, who has campaigned heavily on border issues, for not proposing decriminalizing illegal migration in his immigration blueprint. Such a step would make a significant change to U.S. immigration law.

"If you truly want to change the system, we have to change that section" of federal law, Castro said.

O'Rourke said he wanted to keep the provision so authorities could pursue drug and human traffickers. But Castro cut him off, noting there are separate laws that could be used against those crimes, and the entire stage broke down into crosstalk and shouting.

Appeals To Diverse Base

The diversity of the modern Democratic Party was on display Wednesday night — three women, one Black man and a man of Mexican heritage vying for the presidential nomination. And the candidates made sure they were speaking to the party's base, which is becoming younger and less White.

O'Rourke showed off his fluent Spanish in his opening statement. Booker countered with his Spanish during a discussion of immigration, and also noted that he's probably the only candidate who lives in a poor, predominantly minority community. (Booker lives in Newark.)

Castro spoke in Spanish during his closing statement and talked about saying "adios" to Trump.

New York Mayor Bill de Blasio noted he has an African American son as he urged the party to "stop acting like the party of elites."

Perhaps the hardest question for Democrats to answer was how the candidates would deal with a Republican. Not Trump, but Senate Majority Leader Mitch McConnell.

Republicans have a good chance of still controlling the Senate even if Democrats win the White House in 2020, and it's unlikely McConnell would allow any of the candidates' ambitious proposals on government-run health care or green energy to become law.

Warren promised she had a plan to deal with McConnell, though it seemed to center on rallying public opinion against him.

"We have to push from the outside and lead from the inside," she said.

Booker proposed that the party's presidential nominee campaign in longshot states like South Carolina in hopes of snaring enough seats to take over the Senate.

Inslee suggested eliminating the filibuster — which the president cannot do and which would strengthen McConnell's hand if the GOP remained in the majority.