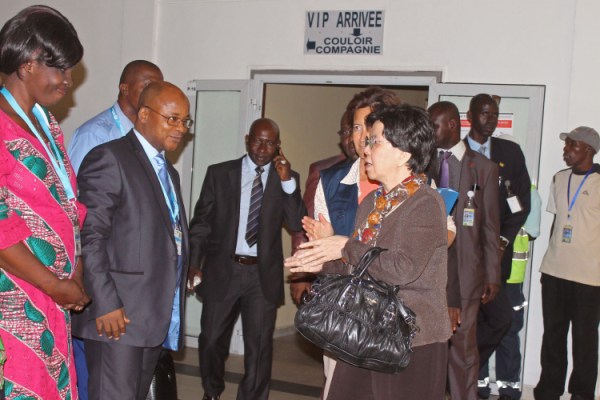 PHOTO: China's Margaret Chan, center, Director-General of the World Health Organization, WHO, is greeted by officials as she arrives at the airport for talks on Ebola in the city of Conakry, Guinea, Friday, Aug. 1, 2014. The death toll from the worst recorded Ebola outbreak in history surpassed 700 in West Africa as security forces went house-to-house in Sierra Leone’s capital Thursday looking for patients and others exposed to the disease. Fears grew as the United States warned against travel to the three infected countries — Guinea, Sierra Leone and Liberia — and Sierra Leone’s soccer team was blocked from boarding a plane in Nairobi, Kenya, that was to take them to the Seychelles for a game on Saturday. (AP Photo/ Youssouf Bah)

CONAKRY, Guinea (AP) — An Ebola outbreak that has killed more than 700 people in West Africa is moving faster than the efforts to control the disease, the head of the World Health Organization warned as presidents from the affected countries met Friday in Guinea's capital.

Doctors Without Borders said its teams were overwhelmed with new Ebola patients in Sierra Leone and that the situation in Liberia was now "dire."

Dr. Margaret Chan, director-general of the World Health Organization, said the meeting in Conakry "must be a turning point" in the battle against Ebola, which is now sickening people in three African capitals for the first time in history.

"If the situation continues to deteriorate, the consequences can be catastrophic in terms of lost lives but also severe socio-economic disruption and a high risk of spread to other countries," she said.

At least 729 people in four countries — Guinea, Sierra Leone, Liberia and Nigeria — have died since cases first emerged back in March. Two American health workers in Liberia have been infected, and an American man of Liberian descent died in Nigeria from the disease, health authorities there say.

Plans are underway to bring back the two American aid workers — Nancy Writebol and Dr. Kent Brantly — back to the U.S. A small private jet based in Atlanta has been dispatched to Liberia, said missionary group Samaritan's Purse. Writebol remains in serious but stable condition, the group said Friday.

While health officials say the virus is transmitted only through direct contact with bodily fluids, many sick patients have refused to go to isolation centers and have infected family members and other caregivers.

The fatality rate has been about 60 percent, and the scenes of patients bleeding from the eyes, mouth and ears has led many relatives to keep their sick family members at home instead. Sierra Leone is now sending teams door-to-door in search of Ebola patients and others who have been exposed to the disease.

Chan emphasized Friday that the general public "is not at high risk of infection," but also said the Ebola virus should not be allowed to circulate widely.

"Constant mutation and adaptation are the survival mechanisms of viruses and other microbes," she said. "We must not give this virus opportunities to deliver more surprises."

Randy Schoepp, chief of diagnostics at the U.S. Army Medical Research Institute of Infectious Diseases, which is running the only lab in Liberia that is testing Ebola samples, said the deaths there may be just the tip of the iceberg.

Even just getting samples to a lab is difficult, he said, because many drivers are scared to even transport vials of blood that may contain Ebola.

"I believe we're only seeing a small portion of the cases out there ... The virus is getting to large, dense, city areas. We're now getting samples (to test) from all over," he said Friday.

WHO has said it plans to launch a $100 million response plan that would include funding the deployment of hundreds more health care workers to the affected countries.

Doctors Without Borders, or Medecins Sans Frontieres, on Friday said that pledge "needs to translate to immediate and effective action." While the group has deployed some 550 health workers, it said it did not have the resources to expand further.

"Over the last weeks, there has been a significant surge in the epidemic - the number of cases has increased dramatically in Sierra Leone and Liberia, and the disease has spread to many more villages and towns," the organization said in a statement. "After a lull in new cases in Guinea, there has been a resurgence in infections and deaths in the past week."

Meanwhile, other countries are taking precautions to prevent the spread of Ebola.

The African Union mission in Somalia canceled a planned troop rotation by Sierra Leonean forces in an effort to prevent Ebola from crossing into the Horn of Africa country, the military said.

Seychelles forfeited an African Cup qualifying game and withdrew from the competition Thursday rather than allow Sierra Leone's soccer team to travel to the Indian Ocean island. And a cyclist from Sierra Leone competed in the Commonwealth Games after being tested for Ebola.

Nigeria's minister of health, Onyebuchi Chukwu, said Thursday the government has located 10 more people who had primary contact with the man who flew to Lagos, and died there because of Ebola. The government is tracking down the remaining people who had contact with him, he said. As of Friday, 69 people are under surveillance and two are quarantined, Chukwu said.