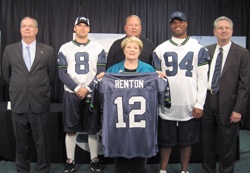 The Seattle Seahawks plan to build a state-of-the-art training center along the shores of Lake Washington in Renton.

Expected to open in June 2008, the training center will be on a 19-acre industrial site that was the former home of a coal tar refinery and creosote plant. The property was bought in 2000 and cleaned up by Vulcan Real Estate, a Paul Allen-owned company, in conjunction with the city of Renton and the Washington State Department of Ecology. It is bordered by Interstate 405, Lake Washington, residential property and 44th Street.

Groundbreaking for the center is scheduled in October. The complex will occupy twice as much land as the current headquarters in Kirkland and includes five times the square footage.

Included in the 200,000-square-foot complex are an indoor practice field, administrative offices, three outdoor regulation grass fields and one FieldTurf field (150 yards). The Seahawks will say goodbye to the bubble where they currently hold indoor practice, and instead will have a new indoor practice field measuring 80 yards plus two end zones. It features a clear height of 110 feet, allowing for game-situation kicking and punting. 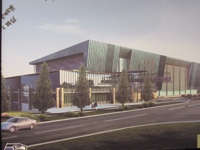 An artists' rendering of the Seahawks' new Renton home.

"We love the bubble, but it's getting moldy — so to have a new facility, we're very, very excited about this,"Coach Mike Holmgren said.

The second floor will contain the football administration area, with approximately 48,000 square feet of coaching and football personnel offices, draft room, cafeteria and weight room mezzanine. The Seahawks' administrative offices will be on the third floor.

Seahawks fans will no longer have to travel four hours from Seattle to Eastern Washington University in Cheney to see training camp. Access for up to 3,000 spectators per day will be provided.

"This is a great day for the 12th Man," Seahawks CEO Tod Leiweke said.

Team officials hope the facility will attract top free agents to the Seahawks and entice players to stay in town and participate in off-season workouts. While with the Falcons in Atlanta, team President Tim Ruskell saw that an upgraded stadium provided a 50-percent increase in participation in off-season training programs.

"We believe it will be unparalleled in the world of sports, not just the NFL," Leiweke said. "And at the end of the day, it is an investment by our owner in retaining our players, attracting free agents, consolidating our organization to one facility and bringing training camp to our home city."

"Community partnerships are important to the city of Renton and we're very excited to welcome the Seahawks to Renton," Koelker said.