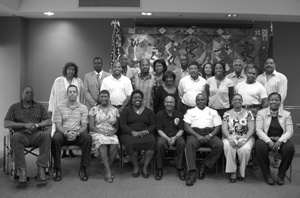 This past spring, Portland's chapter of NOBLE – the National Organization of Black Law Enforcement Executives – hosted a Pacific Northwest regional conference with representatives from Colorado, California, Arizona, Washington and Oregon.
Last month, a slate of new officers was installed at ceremonies in the community meeting room at Northeast Precinct.
Now the group is taking steps to reach out to the local community with supportive programs, projects and trainings.
"It is not just for Black law enforcement — it's for everyone in law enforcement," says Marci Jackson, program coordinator of the Portland Police Crisis Response Team. "But it addresses specifically things that are going on with minorities in the law enforcement fields."
NOBLE was founded in 1976 by a group of 40 Black law enforcement executives, mostly chiefs of police, who had gathered at a symposium about urban crime.
The group's core belief was that minority law enforcement officials could have a unique and significant impact on reducing crime in urban communities.
The organization, now thousands strong, united individual officers from federal, state, county and city law enforcement bureaus at executive and commend levels as well as rank-and-file enforcement.
Newly elected officers in Portland's chapter include resident agent-in-charge of the Bureau of Alcohol, Tobacco and Firearms David Lomax, president; Portland Police Detective Dana Lewis, vice president; Marci Jackson, secretary; Washington County Sheriff's Department Sergeant Blake Barnes, sergeant-at-arms; Portland Police Lieutenant Vince Elmore, parliamentarian. Multnomah County Sheriff's Department Lieutenant Vera Pool is immediate past president.
"I think the organization is also even for community members, business members, anyone who believes in our mission — to ensure the equity of administration of justice, so we make sure that what's being done is done lawfully, that we're holding people accountable within the agencies," Detective Dana Lewis says, "so that justice is for everyone."
Bringing people into law enforcement is a major goal of the organization, as is building neighborhood partnerships doing everything from public safety to diversity workshops.
"We put on classes that help the professional development of the officers of our members, and we do things within the community that help build relationships," Lewis said.
Every year NOBLE organizes and hosts 'Take 25,' alongside the nonprofit groups Missing and Exploited Children, and the Boys and Girls Club.
"Last year we basically took kids at New Columbia and made safety identification kits for their families — about 100 kids," Lewis said.
But, she added, now the group wants to step up its community service activities.
"We want to start up partnerships to start tackling law enforcement issues and concerns that, not only within these law enforcement agencies that officers have, but also the issues and concerns that community members have within their own communities," Lewis said. "We're all aware of the racial profiling issue that's nationwide – I think NOBLE is standing tall and ready to do some things to help the relationship so that we're not doing that kind of thing."
Traditionally the group sends speakers to local schools to talk about law enforcement issues and careers, and Jackson and Lewis said they're looking for local groups serving youth who are interested in involvement with NOBLE.
Jackson stressed that local residents should call upon the group as a support as well.
"We're available to the community," Jackson said. "If a community group or an agency, say for instance the city of Portland, would like diversity training, NOBLE can provide that."
Portland's chapter has certified diversity trainers who follow the national organization's program model.
Another significant area of development is in scholarships and internships. Jackson said the local chapter wants to encourage area students who are interested in law enforcement to obtain internships at NOBLE's national office in Washington DC.
The local group has also started a scholarship fund.
"We've had some funds donated to us specifically for scholarships, so we're on the road, we're getting a committee together and we're going to start giving them out," Lewis said.
"I think we all realize that our youth need direction, they want guidance and mentoring, and NOBLE wants to help," Lewis said. "We want the community to know we're just as concerned as they are about a lot of these issues because in the end, it affects us all."
Fore more information call President David Lomax at 503-793- 2437, or go to www.noblenational.org.