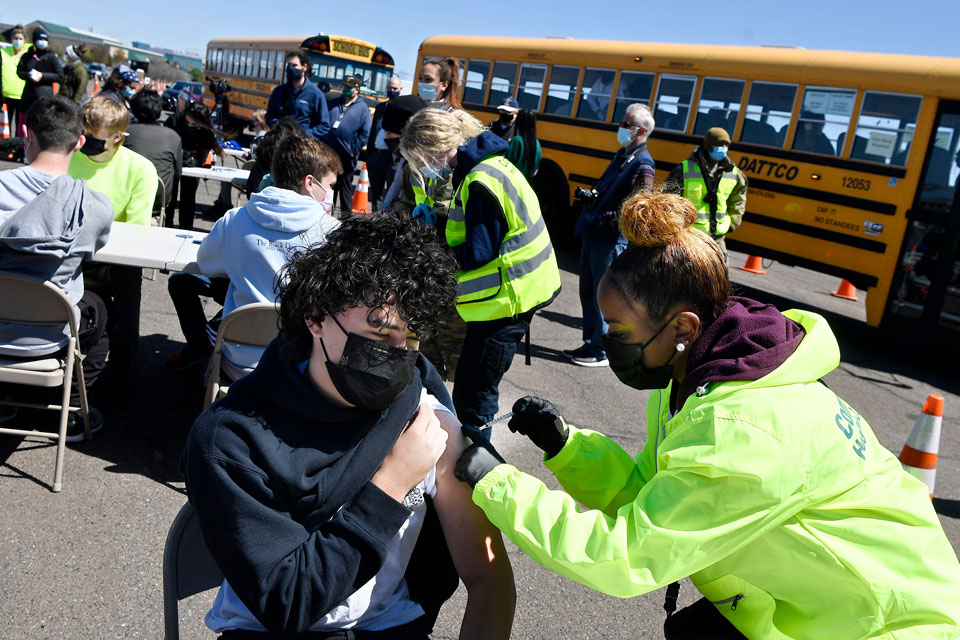 Fearing his parents wouldn’t approve of his decision to get a COVID-19 vaccine but needing their signature, Andrew signed up for the appointment in secret, and then sprang it on them at the last minute.

They said no. Andrew cursed at his mother and father and called them idiots. Andrew’s dad grabbed him by the shirt collar.

“He said, ‘You’re not getting this damn vaccine; you need to lower your voice. Watch your tone when you talk to me.’ It was, it was the first time my dad had ever done something like that — he grabbed my shirt and yelled in my face,” said Andrew, a 17-year-old student in Hoover, Alabama.

In most states, minors need the consent of their parents in order to be vaccinated against COVID-19. Navigating family politics in cases of differing views has been a challenge for students and organizers of outreach campaigns, who have faced blowback for directly targeting young people.

President Joe Biden has encouraged every school district to promote vaccines, including with on-site clinics, to protect students as they return to school amid a resurgence of the coronavirus. But several governments and school districts have taken more neutral stances in areas where skepticism of the vaccine remains prevalent.

In Tennessee, the health department ended vaccination events and outreach aimed at minors following criticism of advertisements that featured children and included slogans like “Give COVID-19 vaccines a shot.” Republican lawmakers accused the health department of “ peer pressuring ” children to get the vaccine and criticized a top official who sent a memo to vaccine providers explaining that they could legally waive parental consent under Tennessee law.

Nationwide, half of people ages 12-17 have been vaccinated. That age group has been eligible for the Pfizer vaccine since May on an emergency use authorization. Trials are underway for younger children.

Full approval for the drug was granted by federal safety regulators recently for people 16 and older. Last week, the Los Angeles Unified School District school board voted to mandate vaccines for students 12 and older.

In Molalla, Oregon, the mayor pressured a high school to cancel a vaccine drive on campus this semester, citing a $50 gift card incentive he equated with bribery. Many who called for an end to the vaccine drive expressed opposition to the vaccines, although Mayor Scott Keyser said he’s not against them. 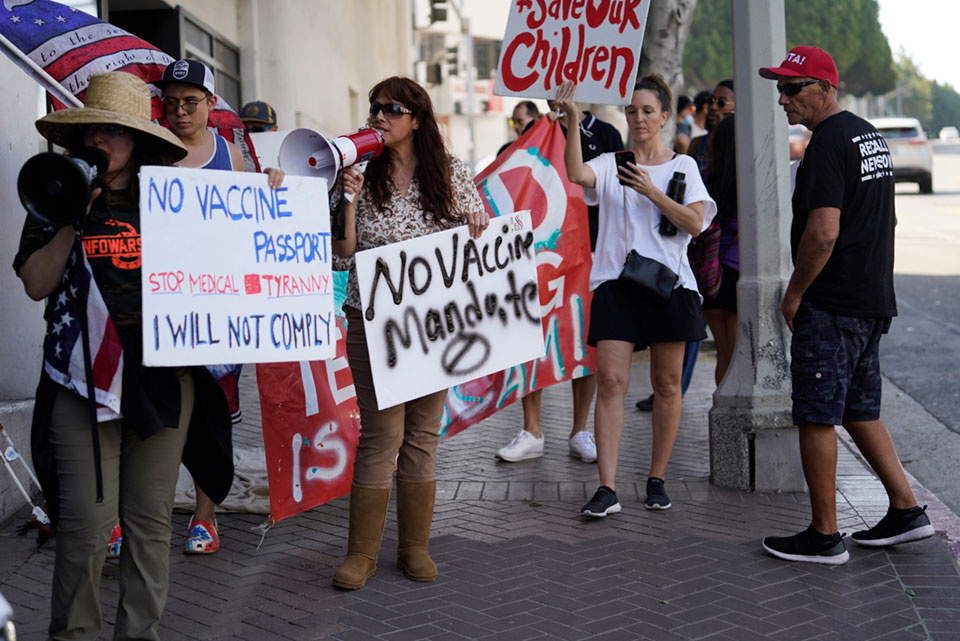 Anti-vaccine mandate protesters rally outside the garage doors of the Los Angeles Unified School District, LAUSD headquarters in Los Angeles Thursday Sept. 9, 2021. The Los Angeles board of education voted Thursday to require students 12 and older to be vaccinated against the coronavirus to attend in-person classes in the nation's second-largest school district. In most states, minors need the consent of their parents in order to be vaccinated against COVID-19. Navigating family politics in cases of differing views has been a challenge for students and organizers of outreach campaigns, who have faced blowback for directly targeting young people. (AP Photo/Damian Dovarganes)School officials in Kettering, Ohio, received death threats in August after TikTok videos baselessly claimed the suburban Dayton district was vaccinating children without parental consent.

There was no truth to the claims — they came out before the school year began, and spring vaccine clinics required parents to be present — but they caused “huge hysteria” in the community nonetheless, according to Kettering City Schools superintendent Scott Inskeep.

“Our families really are struggling with both information and disinformation,”

Inskeep said. “It’s like a match being put to a gasoline fire. When it starts it’s hard to put out.”

In a total of eight states, all in the Southeast and Pacific Northwest, providers can waive parental consent requirements — Washington, Oregon, Idaho, Arkansas, Tennessee, North Carolina, South Carolina, and Alabama, according to a May review by the Kaiser Family Foundation.

In some areas, there have been efforts to make it easier for kids to get vaccinated.

State legislators in New York and New Jersey introduced laws that would allow teens to consent to vaccines without parental consent, but they were never passed. D.C. passed its law and is being sued by an anti-vaccine group. In New Mexico, health officials remade consent forms so that parents could sign them and send them with their kids, instead of having to show up in person.

Elsewhere, some officials have tried to give parents more say over vaccinations for teenagers.

In May, officials in two Oregon counties barred health officials from giving vaccines to kids without parental consent. Yamhill County Commissioner Lindsay Berschauer and the mother of three teenagers defended the move saying, “Our children are not the property of the State of Oregon.”

But the counties backed down after state health officials issued a legal opinion affirming consent rights for children 15 and older. Berschauer continues to advocate against vaccine incentives for teens, calling the programs “peer pressure.”

On paper, Alabama’s law is one of the more liberal, allowing minors like Andrew to get the vaccine on their own. In practice, that’s nearly impossible. The Alabama Department of Public Health requires parental consent as a matter of policy, and so do major pharmacies.

The day after the argument with his parents, Andrew’s father took him to the pharmacy and signed, without saying a word. Andrew’s father confirmed his son's account but declined to be interviewed. Andrew asked that his last name not be used out of fear of further upsetting his parents.

Pediatricians in some cases try to facilitate conversations between children and parents and promote the COVID-19 vaccine. But it doesn't always work, even with parents who have accepted their pediatrician's recommendation on other vaccines, including for HPV and the flu.

“They look at me like I’m suggesting that they feed their child poison when I’m recommending a COVID vaccine,” said Dr. Katrina Skinner, president of the Alabama Chapter of the American Academy of Pediatrics.

Andrew's Hoover High School does not promote COVID-19 vaccinations on its website or social media channels, and there’s no indication the school will host a vaccine clinic. School officials did not respond to calls and emails requesting comment.

Alabama state health officials have been encouraging the vaccines among young people with a contest on the social media app TikTok that awarded $250 for the best video promoting COVID-19 vaccinations.

One of Andrew's schoolmates, Rotimi Kukoyi, 17, was one of four contest winners. He shared the video with his 18,000 followers, built over two years by making jokes.

“I showed the CDC explaining how the vaccine is safe, and how it’s effective, and then I linked resources for people to sign up to get the vaccine,” Rotimi said.