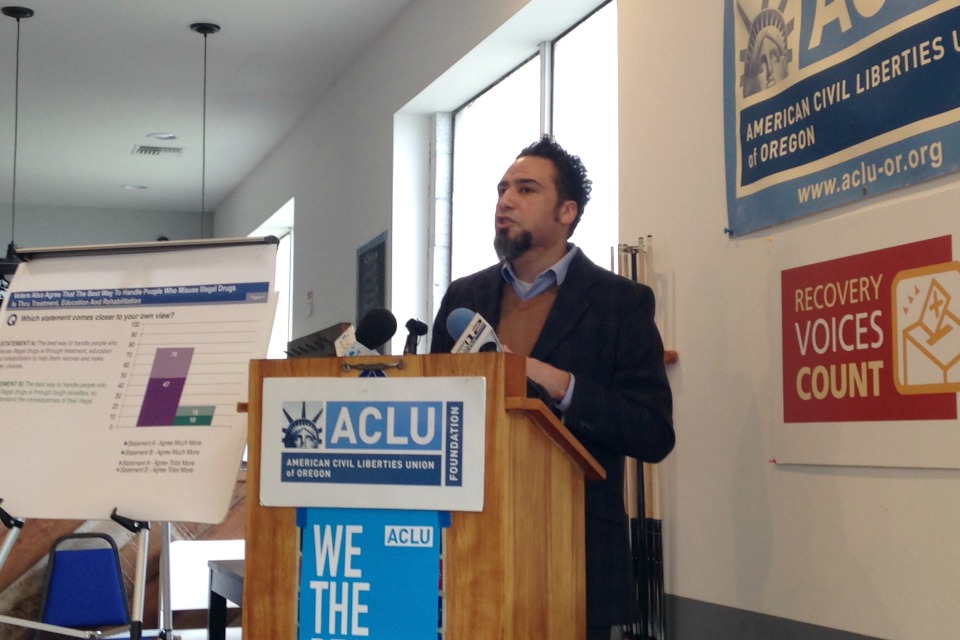 The poll shows that 73 percent of Oregon voters overwhelming favor changing small-scale possession charges to a misdemeanor, instead of a felony, which carries harsher penalties such as lengthy prison sentences and larger fines. Only 19 percent oppose the proposed de-felonization.

“Rather than ensuring that people have access to treatment and recovery, our system focuses primarily on a criminal justice response,” stated David Rogers, executive director of the ACLU of Oregon, during a Wednesday morning press conference for the poll’s findings.

“Let’s be clear, the War on Drugs is a failure. It has damaged families and ruined lives… and has cost taxpayers billions of dollars,” continued Rogers, who stressed the importance of wiser spending with a looming $1.7 billion state deficit. “The War of Drugs has also been unfair. People of color possess drugs at the same rate as everyone else, but they are more likely to be arrested and convicted here in Oregon.”

“We know that Oregonians from across the state support a different approach,” Rogers said.

The survey of 600 registered Oregon voters from various demographics was conducted between Jan. 26 – 29, 2017 by GBA Strategies, and is subject to a plus or minus 4 percent error margin. Of seven different criminal justice and public safety issues presented to voters, drugs were the top concern, at 43 percent, followed by over-spending on incarceration and prisons at 30 percent.

The support of lesser consequences for drug offenders can be linked to another statistic the survey uncovered: nearly two-thirds of Oregonians (64 percent), across genders and political parties, know someone who has struggled with drug addiction.

The poll is meant to provide data-backed support of HB 2355, a new piece of legislation that largely addresses police profiling, but includes the small-possession reclassification. Gov. Kate Brown, Attorney General Ellen Rosenblum, House Speaker Tina Kotek, the Oregon State Sheriffs’ Association, and the Oregon Association Chiefs of Police have all endorsed the bill.

If HB 2355 passes, Oregon will join Connecticut, Utah and California among states that have dialed back small-possession drug charges from a felony to a misdemeanor.

Underscoring the urgency for reclassification is the fact that most misdemeanors can be expunged, whereas felonies cannot. Such a conviction can tarnish offenders’ records for life and hinder them from accessing employment, educational opportunities and housing.

Cody Roberts is a mentor at the 4th Dimension Recovery Center. After struggling with drug addiction which led to a felony conviction, Roberts sought treatment and put his life back on track. But, he said, the felony still lingers over every opportunity to better his working or living situation.

“Today, I work with guys who are dealing with the same thing,” Roberts said during the press conference. “These are successful people, they’re educated, but they still have to deal with a felony for having been addicted to drugs and being caught with a small amount. They can’t move forward with their lives, and frankly it discourages them. (Some) end of returning back to what they were doing.”

Seventy-six percent of polled Oregonians believe the best way to handle drug problems is through prevention, treatment, education and rehabilitation, rather than through tough penalties. Furthermore, 78 percent of Oregonians said they were more likely to support a district attorney or sheriff who felt the same way.

The support for treatment over incarceration is recently being put into practice through Multnomah County’s pilot program Law Enforcement Assisted Diversion, or LEAD, which was officially launched on  Feb. 27.

The program allows police officers to redirect low-level drug offenders to social services, instead of to jail and prosecution. LEAD was initially developed and deployed in Seattle, Washington.