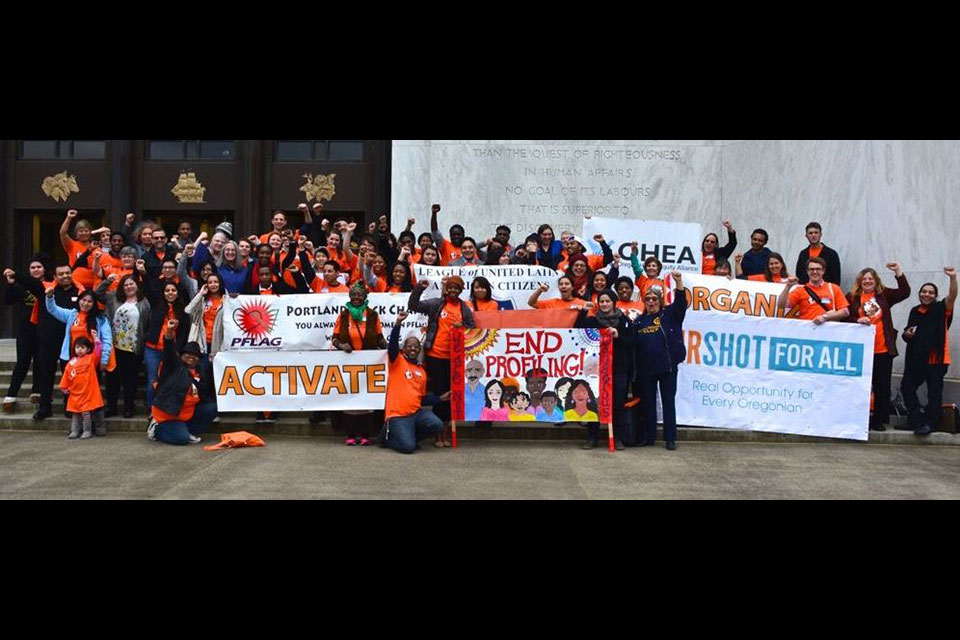 For many people of color -- nationwide and in the Portland area -- being unfairly and unequally treated in the criminal justice system is a cruel reality.

As reported by InvestigateWest in partnership the Pamplin Media Group, in Multnomah County, “African-Americans are charged three to 30 times as often as white residents for everything from pedestrian and transit fare violations to drug charges and crimes related to interactions with police.”

Police profiling is just one piece of the inequality puzzle, but its statewide persistence carries heavy socio-economic weight for its victims.

African American defendants in Multnomah County paid about $21.5 million more than they would have if their fines had been equal to those levied on White defendants, according to InvestigateWest.

“I believe profiling is an economic justice issue,” Kayse Jama, executive director of Unite Oregon, told The Skanner. “You just need to go to the courts downtown and you see who has been ticketed. The majority is generally people of color.”

In 2013, Jama took the issue of profiling to Salem, but was met with little result.

Then came the summer of 2014, when the fatal police shooting of Michael Brown in Ferguson put law enforcement – and its handling of force against African Americans – in the hot seat.

In 2015 the legislature passed the End Profiling Act, which was spearheaded by Attorney General Ellen Rosenlum and championed by Sen. Lew Frederick and Rep. Alissa Keny-Guyer. It defined profiling as “people targeted based on their race, ethnicity, religion, national origin, language, housing status, and sexual orientation or gender identity.”

It also established a compliant mechanism so that individuals targeted by police profiling could file a grievance with the Law Enforcement Contacts Policy and Data Review Committee (LECC).

Yet some felt the legislation didn’t live up to its name. “For too long we’ve heard stories of our community facing profiling by state police,” said Amira Streeter, policy and advocacy director at the Urban League. “This unlawful act still continues even after the passage of HB 2002.”

What the bill did accomplsih, however, was the creation of a task force. The Work Group on the Prevention of Profiling by Law Enforcement, steered by Rosenblum and assembled with organizations such as Unite Oregon, the Portland Police Association and the ACLU of Oregon, devised recommendations to address systematic profiling.

Eighteen months of task force meetings culminated in House Bill 2355, which aims to create a method to track profiling.

If passed, the new bill would mandate that all police officers in Oregon collect data on a person’s perceived race, ethnicity, age and sex when making pedestrian and traffic-stops. It would also make Oregon the second state, after California, to record pedestrian data. Currently only Portland, Eugene and Corvallis’ police departments require officers to track race and ethnicity during traffic stops.

The data accrued through HB 2355 would be reviewed by the Oregon Criminal Justice Commission to identify patterns or practices of profiling. The commission would then report its findings annually, beginning in 2020, to the governor and the Department of Public Safety Standards and Training.

The legislation also requires police to complete training in cultural competency and implicit bias to prevent profiling. It also reclassifies narcotic possession from a felony to a misdemeanor.

“We know there’s some disparity between who is stopped, who is searched and who is convicted on drug possession,” said Jama, who presumes some 4,000 people could benefit bi-annually from the narcotic charge reduction.

According to InvestigateWest’s report, although Portland police now stop fewer people than in the past, “African Americans are still stopped at twice the rate of Whites by the city’s patrol and gang enforcement officers.”

The bill covers a lot of ground, but Sen. Lew Frederick said he’s most impressed by the felony rescheduling.

“It’s been used by a number of law enforcement folks as a way to marginalize people even further,” said Frederick, adding that felony charges often tarnish offenders’ access to employment and housing.

“We know that because of stereotypes and systemic prejudices people in our communities are often targeted based on their race, ethnicity or cultural background,” said Amanda Manjarrez, advocacy director at the Coalition of Communities of Color. “This unfair practice perpetuates mistrust of police and makes our communities less safe.”

In a similar sentiment Frederick said that profiling legislation is part of a larger momentum brewing at the state capitol.

“What we’re really talking about is reestablishing the credibility of how we deal with criminal justice reform,” Frederick said. “We need to have a situation where I’m not hearing from folks in the community that they’re worried if they call the police. That’s unacceptable.”

The senator has a number of bills on his desk that relate to police reform, including one that calls for a regular psychological visit (not an evaluation) for every law enforcement officer in the state to better address the rate of under-treated, or under-diagnosed, post-traumatic stress disorder.

He also emphasized the fact that both police and sheriffs’ associations in Oregon have endorsed the new profiling bill, which is telling, he said. “It means that they’ve recognized problems, and that the narrative that everyone was being treated equally is in fact a myth.”

Unite Oregon is leading the local campaign on HB 2355, which is endorsed by 75 civil rights organizations including the Urban League of Portland and the Coalition of Communities of Color. The organization has planned a lobby day in support of HB 2355 on March 16 in Salem.