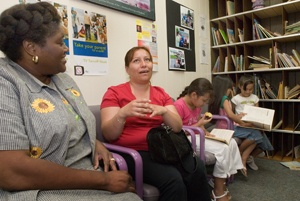 Mardica Hicks approaches a client in the Children's Community Clinic's waiting room with a gentle voice and a warm smile.
"Hi. I'm Mardica, the new director of the clinic. How are you?" Hicks asks the Latino mother, whose three young girls are patiently waiting to see a nurse practitioner.
"Have you been waiting long?" Hicks asks.
The mother smiles and shakes her head.
"No," she says, finding the right English words. "Not long."
The girls wiggle into adjacent seats and choose from the clinic's vast library of children's books. The oldest child, 8-year-old Ilce snacks on an apple.
With their long shiny hair, colt-like limbs and smiling faces, the children are pictures of good health – a model of what Hicks wants to see in her community.
"Children are our focus here," Hicks says of the North Portland clinic. "We want to make sure that they have a healthy childhood ... and that all children in this community have access to affordable health care."
Formerly known as the North Portland Nurse Practitioner Community Health Center, the little clinic off North Killingsworth Street is the only clinic in Portland that focuses exclusively on disadvantaged children, ages 0 to 21.
In the 27 years since its founding, the clinic has served hundreds of thousands of children from "working poor" families, who would have otherwise fallen through the cracks in a system where their families make too much money to qualify for state or federal assistance, but not enough to afford quality health insurance.
The clinic has always struggled financially, relying on private donations and grants, but after a year's worth of controversy, including the ouster of the clinic's founder, Mariah Taylor – a woman whose dedication to the community won accolades from people like Oprah Winfrey – the clinic is on the edge.
In a letter composed June 27, one month after her hire, Hicks, a graduate of St. Mary's Academy and Portland State University who left her job as an administrator at Portland Community College Cascade Campus to lead the children's health clinic, asked those closest to the clinic to reach into their pockets.
"Financially, the clinic has approximately one month of operating expenses in its coffers," Hicks wrote.
"In January of this year the organization's grant writer left for another position and at her departure, all the organization's grant writing and grant management activities ceased."
With about 75 percent of its funding coming from grants, the clinic that served 1,800 impoverished children last year, was in danger of closing for good.
"Right now we're just trying to bridge our funding for the next three to six months," Hicks explains.
The clinic is in the process of hiring a new grant writer, but that person can't make grant money magically appear.
"That's how it is with grants," Hicks says. "You plant a seed and then you have to wait."
Generally, it will be six months before an organization sees the fruit of those grant-writing "seeds."
Until then, the Children's Community Clinic needs $15,000 to $25,000 a month to sustain itself.
"We need to focus on bridging those months, but we're also looking at long-term funding," Hicks says.
And clinic supporters have been generous. In the weeks after her letter went out, Hicks has seen a great increase in donations – everyone from the clinic's own board members to private companies have chipped in to help.
Hicks can't quite breathe easy yet, but she is hopeful about the clinic's future.
"We want to expand our services, to focus on health and wellness and on prevention," Hicks says. "And we want to have more community partners."
The funding crisis is severe, Hicks admits.
"But it's temporary," she says. "We have to deal with it, but we know it's temporary. We know we will recover."