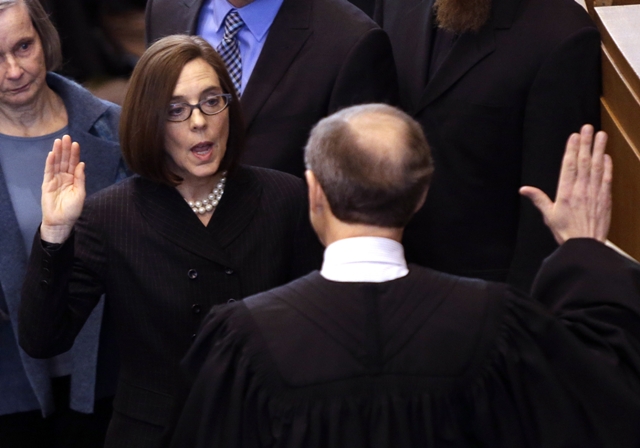 Oregon Secretary of State Kate Brown is sworn in as Oregon Governor by Oregon Chief Justice Thomas A. Balmer in Salem, Ore., Wednesday, Feb. 18, 2015. John Kitzhaber, elected to an unprecedented fourth term last year, announced last week that he would step down amid allegations his fiancee used her relationship with him to enrich herself. (AP Photo/Don Ryan)

SALEM, Ore. (AP) — Kate Brown was sworn in Wednesday as Oregon's governor following an influence-peddling scandal that prompted the resignation of fellow Democrat John Kitzhaber, who had been the state's longest-serving chief executive before his swift fall from grace.

Brown assumed Oregon's highest office during a ceremony at the state Capitol. Brown, formerly the secretary of state, becomes the first openly bisexual governor in the nation.

Unlike most states, Oregon has no lieutenant governor. Under the state constitution, the secretary of state takes over if a governor steps down or dies.

Kitzhaber, elected to an unprecedented fourth term last year, announced last week that he would step down amid allegations his fiancee used her relationship with him to enrich herself.

Kitzhaber has denied wrongdoing and has consistently maintained that he and Cylvia Hayes worked hard to avoid conflicts between her public and private roles.

In a speech to the Legislature after her swearing-in, Brown praised Kitzhaber for his contributions to Oregon but also said "we must restore the public's trust."

"There is a great deal of work ahead of us, and I'm ready to roll up my sleeves and get to it," she said.

"Oregon has been in the national news for all the wrong reasons," she said of the ethics scandal. "That changes starting today."

Brown, a 54-year-old Minnesota native, came to Oregon to attend law school in Portland, the state's largest city, and established a family law practice before her first run for the Legislature.

Kitzhaber handily won re-election in November to a fourth term after surviving the botched rollout of Oregon's online health care exchange, which turned into a national embarrassment.

But the allegations surrounding Hayes' work were more harmful, dominating headlines in the state following his victory.

A series of newspaper reports since October have chronicled Hayes' work for organizations with an interest in Oregon public policy. At the same time she was paid by advocacy groups, she played an active role in Kitzhaber's administration, a potential conflict of interest.

The spotlight on Hayes led to her revealing that she accepted about $5,000 to illegally marry a man seeking immigration benefits in the 1990s. Later, she acknowledged purchasing a remote property with the intent to grow marijuana.

Though questions about Hayes have swirled for months, the pressure on Kitzhaber intensified recently after newspapers raised questions about whether Hayes reported all her income on her tax returns. She has not publicly addressed the allegation and Kitzhaber has declined to.

Both state and federal officials have launched investigations.

Kitzhaber, 67, met the 47-year-old Hayes before the 2002 election, when he was governor and she was a candidate for the state Legislature. She lost her race, but they reconnected after Kitzhaber's term ended.