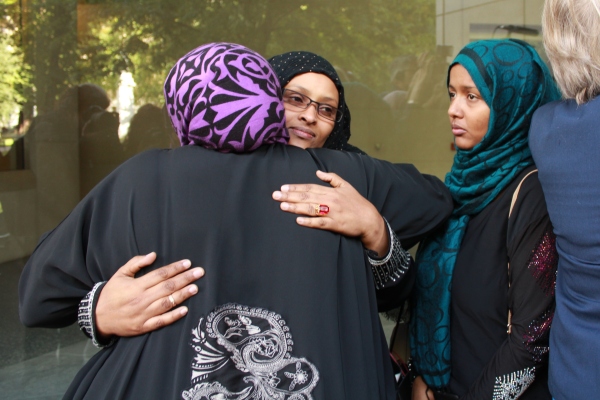 PHOTO: Mariam Barre, Mohamed Mohamud's mother gets a hug after speaking to the press (see video below)

Federal Judge Garr King has sentenced Mohamed Mohamud to 30 years for his role in a bomb plot that targeted 10,000 people gathered in Portland’s Pioneer Square for a Christmas Tree Lighting ceremony.

Prosecutors asked for a sentence of 40 years. The defense asked for 10 years, citing Mohamud’s age, the actions of undercover federal agents who pretended to approve of his actions, the teen’s remorse and his offer to help other teens turn away from violence.

U.S. Attorney Amanda Marshall welcomed the verdict, saying the trial delivered justice and was a victory for democracy and for the United States.

“This sentence is significant and it shows seriousness of the case and this defendant’s conduct, so I am hoping it will send a strong message to radical extremists who wish to commit acts of terror anywhere,” Marshall said. 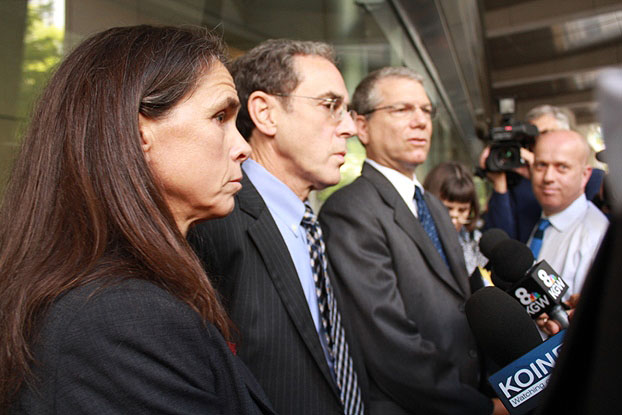 The defense team say they will appeal.

Sady said the sentence was “heartbreaking.”

“We disagree with many of the ways the case has been decided in the course of the pre-trial motions, the trial and the post-trial motions and we expect many of these issues to be brought up on appeal."

Wax said people in the United States should consider whether the FBI had acted in our best interests and in the interests of justice.

Are sting operations the way we want our law enforcement to behave, he asked.

“We believe the question of entrapment is one that should have been given more weight.”

Concerned his son was being radicalized, Mohamed Mohamud’s father went to the FBI for help. They sent undercover agents to speak to the teen, then launched an operation that took Mohamud to the brink. After hours of discussion with the agents over a period of many months, he agreed to detonate a bomb and eventually in November 2010, he pressed a button he thought was attached to a car bomb.

In court Mohamud told the judge he had read around 200 books while imprisoned and has changed his worldview. He apologized to everyone in Portland and also to the Muslim community for causing it shame.

Before Mohamud’s conviction a year ago a jury rejected an entrapment defense. But the judge cited the government’s actions as partially mitigating Mohamud’s guilt. Mohamud was 19 when he was approached by undercover agents who told him he couldn’t go to Yemen and live in Muslim country as he wanted to do, but he could take other actions.

Family and friends of the 23-year-old cried during the sentencing and his mother Mariam Barre spoke afterward on the courthouse steps, condemning the undercover sting. The government should not entrap kids, she said. They should inform parents and help them.

Islam does not condone killing innocent people, she said.

FBI Director James Comey, who was in Portland for other reasons, also spoke at the prosecution’s press conference. Comey said two issues were keeping counterterrorism at the top of the FBI’s priority list: the number of people traveling internationally to conflict zones where terrorists operate; and the internet’s ability to deliver propaganda to people’s living rooms.

“The internet has allowed people to get all the propaganda and frankly all the training they could wish for,” Comey said. “And they can get energized and radicalized in their own homes while wearing their pajamas.”

Comey denied that the FBI is entrapping people by using undercover agents. “We have no interest and no time to get people to do things they are not inclined to do,” he maintained. And he plugged the Joint Terrorism Task Force, saying local people are more likely to pick up on problem activities.

Asked what other parents should do if they suspect their child is being radicalized, Comey said he saw no alternative outside of turning in their child.

“What would you say to a family?  I don’t know what the alternative is for a family. As painful as it is coming forward saves the life of the child and other people.”