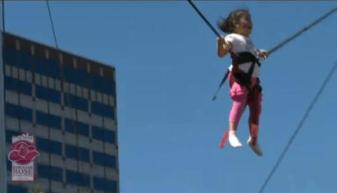 The Rose Festival gets into full swing this weekend with the opening of the Rose Festival CityFair. With a new carnival ride – the Megadrop – and a fireworks display, choreographed to classic rock hits, Gov. Tom McCall Waterfront Park will be the ideal place to be for anyone who loves to have fun. Admission is free for everyone Friday May 25, and for children under six throughout the festival.

The CityFair will be open on all three Rose Festival weekends. Check out the local beer, live exotic animals and CityFair shopping, as you make your way through the carnival.

The new Megadrop is the tallest ride. It will take you 131 feet into the sky, before dropping down with a 5Gs negative force, until all 12 riders suddenly, softly and safely come to rest. The exhilaration will last longer than the ride!

The fair is just the start of what's on offer at Portland's Rose Festival. If past traditions are any guide, plenty of people will be lining up overnight June 8 to secure the best view of the Grand Floral Parade with its Rose Princesses, clowns, marching bands and 14 colorful, floral-covered floats, including a self-built entry from Reed College. More than 90 entries have signed up. This year's Rose Festival theme is Rock 'n' Roses, and the parade will include 18 traditional marching bands, several dancing groups and three acapella singing groups, as well as 21 equestrian groups, plus marchers, dancers and special guests in vintage automobiles 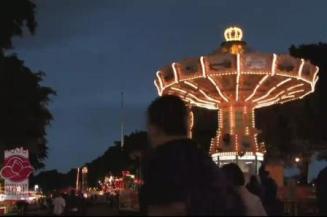 During the 105-year length of the festival, the parade was cancelled five times for wars and once for construction of the stadium, making 2012 the hundredth Grand Floral Parade.

Races; and the Rose Show at the Lloyd Center. Rose growers from across the Pacific Northwest participate will show more than 4,000 fragrant and beautiful roses. Entry is open to anyone, and some 6,000 visitors from across the country are expected to attend this year's Spring Rose Show.

Veterans and families receive free entry to the CityFair. Admission free for all before 4 p.m.

Gathers at the North Park blocks and proceeds: east on Burnside; south on 4th Avenue; west on Salmon St.; north on Broadway; east on Stark St.; south on 10th St.; west on Taylor to end at Lincoln High School.

Navy Fleet arrives: Watch at points along the Willamette River

Children will gather at 1 p.m. in the Hollywood District at Northeast Sandy and 52nd Avenue.

Rose Queen will be crowned in Memorial Coliseum at 9 a.m. ($30 seating)

Navy Fleet departs: Watch at points along the Willamette River