Harper Is Back with an Unusual Lineup 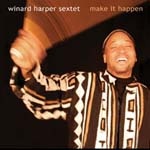 This a radically different Winard Harper aggregation from the bands he brought in times past to Seattle and Portland.
Most importantly, he has two new horn players — tenorist Lawrence Clark and trumpeter Josh Evans, a pair that are talented plus. And on this recording, he adds alto saxophonist Antonio Hart on three tracks. Hart evokes Cannonball Adderley with his driving solo on "I've Never Been in Love Before." Harper also employs tenor saxophonist Stacy Dillard on a pair: "Segment" and "Chronic Mistake."
Harper uses Wycliffe Gordon on trombone on three tracks and his didgeridoo on the title tune, "Make it Happen." If that isn't enough, there is also a four-person percussive section in addition to Harper's drums.
"Children of the World" features Clark's tenor, and he makes the most of the opportunity to stretch out, as does Evans on trumpet. Pianist T.W. Sample recreates Avery Parrish's "After Hours," which is more percussive than the original but maintains its empathy. Gordon's trombone growls his way through a chorus, as do Clark and Evans.
"The Prayer" is the last of the 15 tracks, with Harper opening on balafon, a West African instrument that is both percussive and melodic and gets its sound from a set of tone bars laid across a frame and struck with a mallet. It concludes a wonderful recorded program with solid compositions excellently executed by fine musicians. 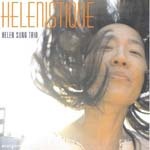 This young pianist studied with some of the masters, including Ron Carter, Clark Terry, Barry Harris and Jackie Mc Lean.
Helen Sung, heard on this release with bassist Derrick Hodge and drummer Lewis Nash, is creative and has a unique sound. Because of her sheer artistry, once this relative unknown is heard for the first time, she will convert the listener to an unabashed fan.
Her individualistic style is captured on tunes like "Lover," "Sweet and Lovely," "Cotton Tail," "Bye Ya," "Willow Weep for Me" and more.

What a treat! Vocalists Karrin Allyson, Nancy King and Jon Hendricks, the lyrics of Chris Caswell and some outstanding accompanying musicians combine on this release.
This entire episode is centered on Caswell's lyrics adapted to instrumental jazz classics. Hendricks makes his first appearance on "Strollin.' " King is a more frequent contributor being heard in duet with Allyson on "All You Need to Say" (a vocalized version of "Never Say Yes"), "A Long Way to Go" ("Equinox"), "Follow the Footprints" ("Footprints"), "Life is a Groove" ("Jordu") and "I Can't Say" ("Teaneck").
All three singers join forces for a rousing version of "Everybody's Boppin,' " a scat fest with a fierce tempo. They get great support from pianist Bruce Barth, bassist Peter Washington and drummer Todd Strait. Frank Wess is heard on tenor on two tracks, and on flute on one. Trumpeter Nick Phillips is on "Follow the Footprints."

Trumpeter Christian Scott has drawn a long line in wet cement between the past and the present with this new Concord CD.
The New Orleans native is not in the least reinterpreting the past. His passion is creating his own groove — a swinging groove, funk-based albeit with elements of rock and rhythm and blues. Most of the music is danceable, and that may be the secret to weaning the masses of the young from hip hop and turning them toward jazz.
He pays respect to Miles Davis with his funked-up take on Davis' "So What." Zaccai Thomas is heard on Fender Rhodes, and Scott's uncle, altoist Donald Harrison, and tenorman Walter Smith III give it a 21st-century sound.
Smith is also key on the funk ballad "Reflections," a tune less danceable than most of the rest. Scott is the second soloist and he uses time, notes and spacing much like Davis.
One would have to say Scott is heavy upstairs, too. He finished a five-year curriculum at the Berklee College of Music in 30 months.