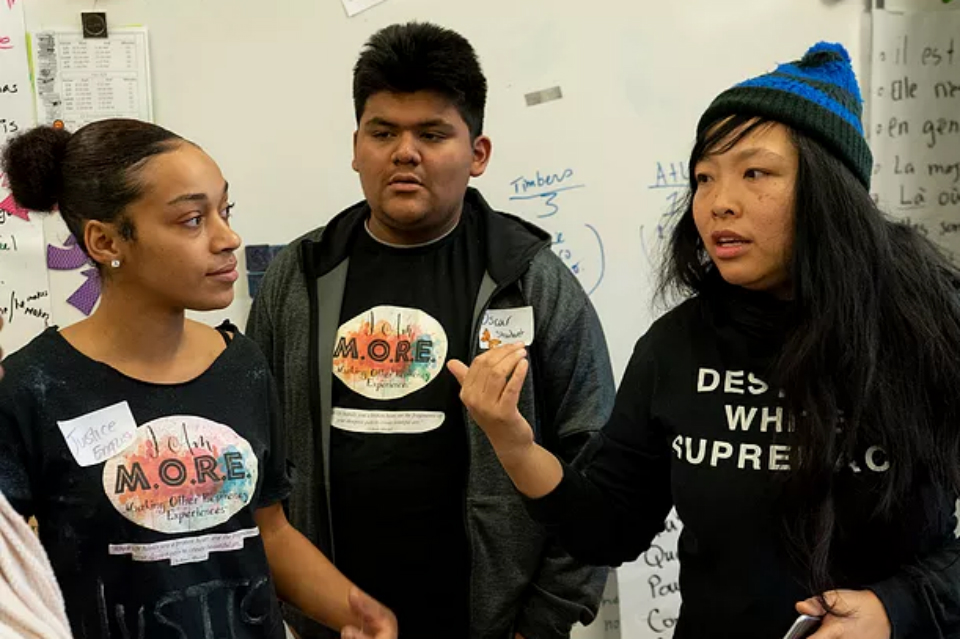 PORTLAND, OR – Students from Roosevelt High School who recently started a storytelling and resiliency-building initiative have been invited to perform at the opening of an annual conference in Philadelphia on trauma-informed practices. The youth will also co-facilitate a training workshop to help national leaders across health, education, and social service disciplines understand how to better engage with youth who have experienced trauma.

The I Am M.O.R.E. (Making Other Resiliency Experiences) project also is being nationally recognized by Education First, a Seattle-based professional services firm that runs a Social Emotional Learning (SEL) Innovation Fund. Of the 1,300 applications from around the country, I Am M.O.R.E. was chosen to receive a $5,000 award to continue its programming in the 2019-20 school year. Part of the recognition is an all-expense-paid trip to Albuquerque, New Mexico, in October for a convening of SEL experts from across the country.

The recent local and national accomplishments of I Am M.O.R.E. speak to the exceptional caliber of its programming and the unique way it puts youth front and center of the growing national conversation, typically led by adults, about how to serve young people who have experienced trauma. I Am M.O.R.E. leverages personal storytelling, with critical inquiry and reflection, and social-emotional skill building as key elements to a creative, self-discovery process that both quickly and deeply results in increased resiliency, and a deliberate embrace of life-enhancing virtues, such as courage, hope and joy.

This recent national exposure is just the beginning of a youth-led, resiliency-building movement

“The impact these students have had, not only on their own lives, but the lives of other youth and adults within just six months is phenomenal,” said S. Renee Mitchell, an award-winning former journalist for The Oregonian, a Roosevelt teacher and the visionary leader of I Am M.O.R.E. “This recent national exposure is just the beginning of a youth-led, resiliency-building movement that will change lives and raise hope around the country.”

The idea for I Am M.O.R.E. was seeded in December after the Portland-based Stand For Children organization awarded its $16,000 Beat The Odds Scholarships around the state. Three of the four Portland winners – Justice English, Johana Amani and Jeanette Mmunga – are all seniors graduating from Roosevelt High, a racially diverse school in North Portland’s St. Johns neighborhood. In their scholarship applications, the young women bravely discussed surviving various forms of trauma, including food insecurity, homelessness, bullying, and sexual violence.

As it was so unusual for Roosevelt to have a cluster of Beat The Odds winners in one year, Mitchell, who is a long-time youth advocate, recognized that the moment presented a unique opportunity to support other youth who also have experienced trauma. Mitchell and the three scholarship winners formed I Am M.O.R.E., and since then, the project has attracted a diversity of other young people who are primarily African American, African, Latino, or Asian.

I Am M.O.R.E, honestly, has given me a voice, a voice that I lost or didn’t recognize that I had

“I Am M.O.R.E, honestly, has given me a voice, a voice that I lost or didn’t recognize that I had,” said Jeanette, from Tanzania. “It opened me up to a better version of myself. I’ve always been outspoken, but it’s different. It’s more of like I speak because I now know who I am.”

Oscar Luna, who is from Mexico, said “Now, I can forgive myself and others. Forgiveness is something huge that I honestly couldn’t express, at all. I typically don’t forgive others. My head was always telling me ‘You should never forgive them.’ But, I Am M.O.R.E opened up my heart, so my heart has a say in it, as well.”

I Am M.O.R.E. first performed publicly on Jan. 12, at World Arts’ annual Dr. Martin Luther King Jr. tribute. Since then, the youth have been paid to co-facilitate workshops in trauma-informed practices for trainings organized by Portland State University, and Portland Public Schools. They have also presented in front of the City Club of Portland, Oregon Education Association, the Senate Education Committee, and Multnomah County Board of Commissioners, among other groups. The organization was recently awarded a $7,000 grant from the Regional Arts & Culture Council to continue its programming over the summer.