Denzel Whitaker: The 'My Soul to Take' Interview

By Kam Williams Special to The Skanner News
Published: 07 October 2010 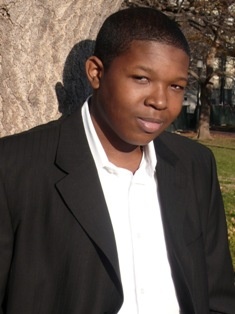 Denzel Dominique Whitaker was born in Torrance, Ca., on June 15, 1990 to Dale and Younalanda Whitaker. He made his acting debut at 11 in "Training Day," opposite his namesake, Denzel Washington, and he was subsequently directed by and co-starred with Denzel in "The Great Debaters." Whitaker has also been on the big screen in "The Bad Lieutenant" and as the voice of Albert in "The Ant Bully."


As for TV, Denzel has appeared on UPN's "One on One," and played recurring roles in Nickelodeon's "All That," and FOX's "The War At Home." His other television credits include such hit shows as ER, The Suite Life of Zack and Cody and CSI: Crime Scene Investigation. Furthermore, he was a series regular on the ABC pilot House Rules. Plus, this past year, he was cast in Gavin O'Connor's Warrior, which is set for release in 2011. And he currently appears as a recurring character on ABC's Brothers & Sisters, and is developing several projects of his own.
In his spare time, Denzel enjoys writing screenplays, playing basketball and golf, hip-hop, dancing, digital animation and independent filmmaking. Taking a page from his sage mentors, Denzel Washington and Forest Whitaker, he aspires to be an accomplished actor/director. Here, the talented young thespian talks about his new movie, "My Soul to Take," a 3-D horror flick directed by Wes Craven.


Kam Williams: Hey Denzel, how's it going? It's been three years since we last spoke. That was for "The Great Debaters."
Denzel Whitaker: Oh, man, get outta here!

KW: What have you been up to?
DW: I have "My Soul to Take" coming out and a few other projects in post-production. I did a little animation in between… shot a music video… and a lot of other stuff.

KW: What interested you in making a horror film?
DW: It's funny you should ask that, because I didn't really watch horror films prior to doing "My Soul to Take." What interested me was Wes Craven's coming back to the platform of writing and directing films, which he hadn't done in awhile, and my being cast as a blind character. Both of those aspects sort of fascinated me as an actor. I ended up having a great time filming, and I saw the film the other day and I really enjoyed it. It was amazing!

KW: One of my readers, editor/legist Patricia Turnier was curious about what was the biggest challenge you faced in portraying this character.
DW: Number one was removing all sight, and learning how to act without using one of the five senses.

KW: Patricia also asks, how did you prepare for the role?
DW: As a practice exercise, I'd usually just wear blindfolds around the house to allow my other senses to take me wherever I would like to go.

KW: One of the shopworn conventions of the horror genre is that the black guy always dies first? Don't tell me that happens in "My Soul to Take."
DW: Wouldn't that be giving away the film?

KW: I suppose so. This is a 3-D film. Is there any difference in your approach to acting when a film is being shot in 3-D?
DW: No, the film that we shot was post-converted to 3-D. So, we didn't actually shoot it in 3-D.

KW: What message do you think people will take away from the film?
DW: I guess the one message that you could take away from this film would be camaraderie, sticking together, whether in this life or in the afterlife. That's one of the messages that hit home. But this movie is really just meant to be enjoyed for what it is by giving you the thrills that you're looking for.

KW: The title of this film, "My Soul to Take," comes from the popular bedtime prayer which begins, "Now I lay me down to sleep…" Did you recite it as a child?
DW: Yes, my parents taught me the prayer. It makes sense that anybody with religious beliefs would pray that the Lord would watch over them and protect them as their sleeping. We just want to send that little message out to the Lord, "Take care of us."

KW: Is there any question no one ever asks you, that you wish someone would?
DW: I'm sorry, I'm not sure what would be an interesting question.

KW: The Tasha Smith question: Are you ever afraid?
DW: Yes I am. Life lends itself to fear. I'm going to go off on a little bit of a tangent here. That's the beauty of life, the uncertainty that we experience, literally, as we go about our day-to-day activities. We're not certain of anything, so fear comes up very often. Fear comes naturally. What's important is how you deal with fear. I face it head-on, but I'm not too proud to admit that I do get afraid sometimes.

KW: The Columbus Short question: Are you happy?
DW: I'm very happy and grateful to be in the position I'm in.

KW: The Teri Emerson question: When was the last time you had a good laugh?
DW: Watching a Kenan Thompson sketch with Morgan Freeman on Saturday Night Live. It just had me rolling. I was dying. I love to laugh. I enjoy life.

KW: The bookworm Troy Johnson question: What was the last book you read?
DW: Gone Fishin' by Walter Mosley. It was recommended to me by [director] John Singleton.

KW: Maybe he wants to adapt it into a movie starring you. The music maven Heather Covington question: What are you listening to on your iPod?
DW: I listen to a lot of different music. I love hip-hop. I'm a big underground rap fan. I listen to the likes of J. Cole. Lately, I've also been getting into techno house music. And I've been on an Eighties retro kick, and I've even been experimenting with some rock.

KW: What is your favorite dish to cook?
DW: I'm a big salmon guy. I even just cooked some salmon for breakfast today.

KW: If you could have one wish instantly granted, what would that be for?
DW: To bring back free, expressive, creative thinking.

KW: Do you ever feel the pressure to not change creatively?
DW: Yeah, I feel that sometimes. That's why I avoid roles that might send me down a road where I might end up being typecast. You see what being typecast can do to a career. That's the number one reason for the death of young actors' careers, people get so used to seeing them playing that one character that they can't accept them as anyone else.


KW: The Nancy Lovell Question: Why do you love doing what you do?
DW: Because I love expression and really connecting with people. As actors, we like to tell stories because they can influence or even change people's lives. It's so cerebral, you never know who you can affect out there.

KW: The Flex Alexander question: How do you get through the tough times?
DW: Fortunately, both my parents, especially my mom, have guided me, and been amazing at handling my career and my finances. They taught me not to buy what I don't need, when I'm not working that much. I've stuck to that regimen while persevering to land that next role and to stay alive in this industry.

KW: What advice do you have for anyone who wants to follow in your footsteps?
DW: Create your own footsteps.

KW: Well thanks again Denzel, and best of luck with the film.
DW: Thank you, it was good to speak to you.

To see a trailer for My Soul to Take