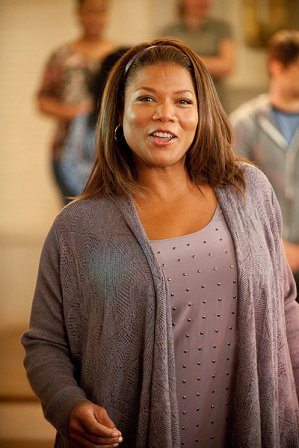 Born Dana Elaine Owens in Newark, NJ, on March 18, 1970, Queen Latifah is an award-winning actress, rapper, singer, author and entrepreneur. She landed an Oscar nomination in 2003 for Best Supporting Actress, as well as Golden Globe and Screen Actors Guild Award nominations for her performance as Mama Morton in "Chicago."

In 2008, Latifah received rave reviews and won a Golden Globe, SAG and an NAACP Image Award for her powerful portrayal of a mother who overcomes an addiction to crack and becomes a positive role model and AIDS activist in the black community in HBO's "Life Support." In addition to her film and television accolades, she earned a Grammy Award for Best Solo Rap Performance in 1994, and was nominated for Best Female Rap Solo Performance for "Go Head" in 2004.

Latifah made her screen debut in Spike Lee's 1991 film "Jungle Fever," and her other film credits include "The Bone Collector," "The Last Holiday," "The Secret Life of Bees" and "Just Wright." Here, she talks about her latest movie, "Joyful Noise," a musical comedy co-starring Dolly Parton.

Kam Williams: Hi Queen, thanks for the interview.

QL: I felt that its timely, uplifting story was perfect for me, given what's going on in the world right now. And I already loved the studio, Alcon Entertainment. They've made a lot of nice movies in the past ["The Blind Side," "Dolphin Tale," etc.], and they really do a great job of marketing their films. And I liked the idea of working with Dolly Parton and Keke [Palmer].

KW: Larry Greenberg asks: What was it like working with Todd Graff? It seems like he knows a lot about both music and comedy. ?

QL: He really does. It was great working with him because he's very thorough. I believe he had an excellent grasp of every aspect of the film from the music to the staging. He knew exactly how he wanted it presented, which made the process a lot easier. And he likes to rehearse, which I do, too. So often, you don't get that opportunity. You only go over everything once and, the next thing you know, you're on set. Todd had a vision of what he wanted to do and, because he also wrote the screenplay, it was easy for him to make observations, take notes and tweak the script whenever necessary. It was perfect!

KW: Editor/Legist Patricia Turnier asks: What message do you think people will take away from "Joyful Noise?"

QL: I would say that overall, the movie offers an inspirational message of hope, love, camaraderie, joy and overcoming challenges in difficult times. All that good stuff!

KW: Harriet also asks: How hard was it to make the switch from hip-hop to acting?

QL: Developing my skills and getting really good at acting was actually more challenging than making the switch. As a rapper, you sort of act in music videos and in the persona you adopt onstage. You kinda have to put yourself out there and be courageous even to be a rapper. So, to step into acting was not that difficult a transition to make. What was difficult was the work and the practice that went into becoming good at it, because I hadn't had any training.

KW: Harriet asks: Is there a classic film that you'd like to star in a remake of?

QL: Hmm… Good question! The James Earl Jones and Diahann Carroll film "Claudine." Or maybe "Taps," the military story starring Tom Cruise and Sean Penn. But that one's all boys so I probably couldn't do that one anyway.

KW: Finally, Harriet says: You did such a great duet with Tony Bennett. Who else would you like to do a duet with?

QL: Gee, there are a whole bunch of people I'd like to duets with. I don't know, pick somebody. [Chuckles] Let's see… Harry Connick, Jr. would be nice.

KW: Kate Newell asks: Will you be making a guest star appearance on the TV show "Glee?"

QL: Whenever they invite me. I would love to.

KW: Patricia also asks: What advice do you have for females interested in founding a record company or breaking the glass ceiling in the music business?

QL: Try to network with others, and don't take no for an answer. It will be a challenge. You just have to connect with people who believe in your vision and who will work with you and advance your cause. And don't give up!

KW: Children's book author Irene Smalls asks: Of what achievement are you most proud?

QL: I did get as far as high school. [Laughs] Just kidding. Let me think… I don't know… The Oscar nomination?

KW: That's fine. Tony Noel asks: Are you involved with the community in your hometown of Newark, and how do you feel about the city's future?

QL: I'm as involved as I can be. Whenever I'm asked to do something, I always tend to show up. Lately, I've been trying to do some land development for affordable housing. I feel very positive about Newark's future, but I know we need a lot of help. I think that starts with the education of our kids and making the streets safer.

KW: Attorney Bernadette Beekman asks: Which charities are you choosing support nowadays, given that lots of non-profits have suffered the last few years because of the bad economy?

QL: We have our own charity called the Lancelot H. Owens Scholarship Foundation which has awarded partial scholarships in and around Newark, NJ for the past 15 years. I support many organizations that I feel are doing the right thing, like Alonzo Mourning's foundation, Alicia Keys' foundation, the Make-a-Wish Foundation, and other well-established foundations. I kick out a lot of time and money wherever I can.

QL: Being smacked on my ass in this bright room when I was maybe 4 or 5 minutes old. I remember wondering, "What is going on here?" It was not cool. [LOL]

KW: Thanks again for the time, Queen, and best of luck with "Joyful Noise."

Watch the trailer for "Joyful Noise"