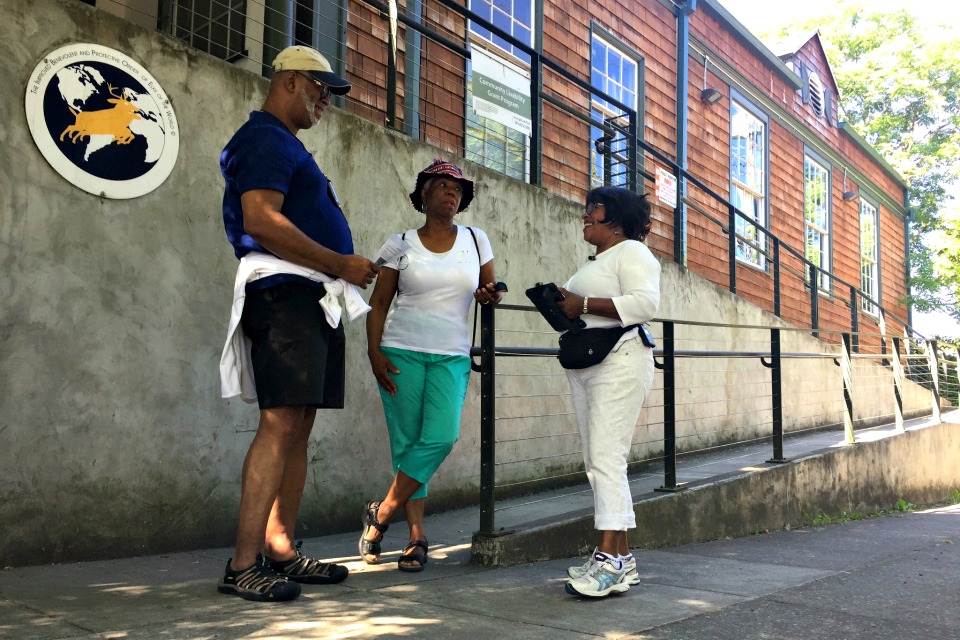 Sharon Steen dons her tennis shoes and, with two fellow seniors, walks streets that in her youth were a vibrant center of Portland, Oregon's African-American community. Wasn't this the corner where an NAACP march began in 1963? Look, the record store is now a fancy high-rise.

It's more than a stroll down memory lane. Steen enrolled in a small but unique study to see if jogging memories where they were made can help older African Americans stay mentally sharp and slow early memory loss.

"What we find when we walk, all of us, is that there are a lot of things we haven't had to remember, and that we can't remember. And then as we walk and talk, the memories pop up and it's reassuring that they're still there," Steen said.

It's part of a new and growing effort to unravel troubling disparities: Why do Black seniors appear twice as likely as Whites — and Hispanics 1½ times — to develop Alzheimer's and other dementias?

A crucial first step is motivating more underrepresented populations to volunteer for research. African Americans make up less than 5 percent of participants in studies of cognitive decline and dementia, according to the Alzheimer's Association.

Beyond possibly improving their own brain health, the Portland study's enticement is a chance to help preserve community and cultural memories from historically Black neighborhoods that are disappearing with gentrification.

"A lot of our wisdom and stories about what community means comes from our elders," said Raina Croff, an assistant neurology professor at Oregon Health & Science University. She leads the SHARP study — it stands for Sharing History through Active Reminiscence and Photo-Imagery.

Three times a week, 21 seniors gather in groups of three and reminisce during mile-long walks through streets once filled with black-owned homes and businesses, areas that in the last 20 years have become majority white. Along the way, "memory markers" — signs or historic photos — prompt "do you remember" conversations about people, events or long-gone landmarks, conversations recorded both for the study and for an oral archive.

Walking is healthy, and being social increasingly is thought critical for seniors' brain health. Adding reminiscence is novel, although some previous research found simply looking through old family photos sometimes sparks memories in dementia patients. Some of the SHARP study participants, like Steen, are cognitively normal for their age; others have early memory problems or what's called mild cognitive impairment. Tests of brain function before and after the six-month program will show if it makes a difference.

It's an innovative way to test what's essentially exercising memory "when you still have a lot of brain left," said Maria Carrillo, chief science officer at the Alzheimer's Association, which is funding the SHARP study.

Croff's theory: "There's something different that happens as you walk through the space and talk about memories."

It's not clear why African Americans face extra risk of dementia. Higher rates of chronic health conditions such as high blood pressure and diabetes, known to be toxic to the brain, don't fully explain the disparity.

Studies presented at the Alzheimer's Association International Conference last week show a growing interest in the role of social and environmental influences, from living in disadvantaged neighborhoods to socioeconomic disparities in early childhood.

One particularly striking study suggests highly stressful experiences — the death of a child, abuse or severe illness, being fired or divorced — can age the brain before its time. University of Wisconsin-Madison researchers tested cognitive functions that decline with age in still healthy volunteers in their 50s and 60s. Each particularly traumatic event over a lifetime added the equivalent of 1½ years of age-related decline — even more, four years, for African Americans, who experienced disproportionately more stressors.

The National Institute on Aging recently awarded $39 million in new grants to better explore racial disparities in Alzheimer's, and one focus is on social and cultural factors, including stress.

"There's so much for us to learn in terms of how cultural factors link to behavior, how upstream factors like residential segregation could shape culture" that in turn influences biological changes, said Dr. Carl Hill, who directs NIA's Office of Special Populations.

He is closely watching the Portland SHARP study to see if through a culture of storytelling, Croff has found a way to engage a hard-to-study community.

Croff deliberately chose "culturally celebratory" historical photos. During one recent walk, the seniors were thrilled to recognize some faces in a photo of a 1961 debutante ball. In photos of that 1963 NAACP march, participants have recognized pastors and switched the conversation to the vitality of church life.

Croff, an anthropologist by training, said some participants see the study as social activism.

"There is something very powerful about saying, 'I'm still here, I'm still part of this community and you're going to see me."

The walks can spark some melancholy, too, said Edna White, 70, who participated in a pilot SHARP study and signed up again.

"There was just so much hustle-bustle and activity and bright lights, and now there are just old buildings. All those places are gone," she said. "Except for in our memory, it's like it never happened."

To read The Skanner's 2015 study about this study, click here.