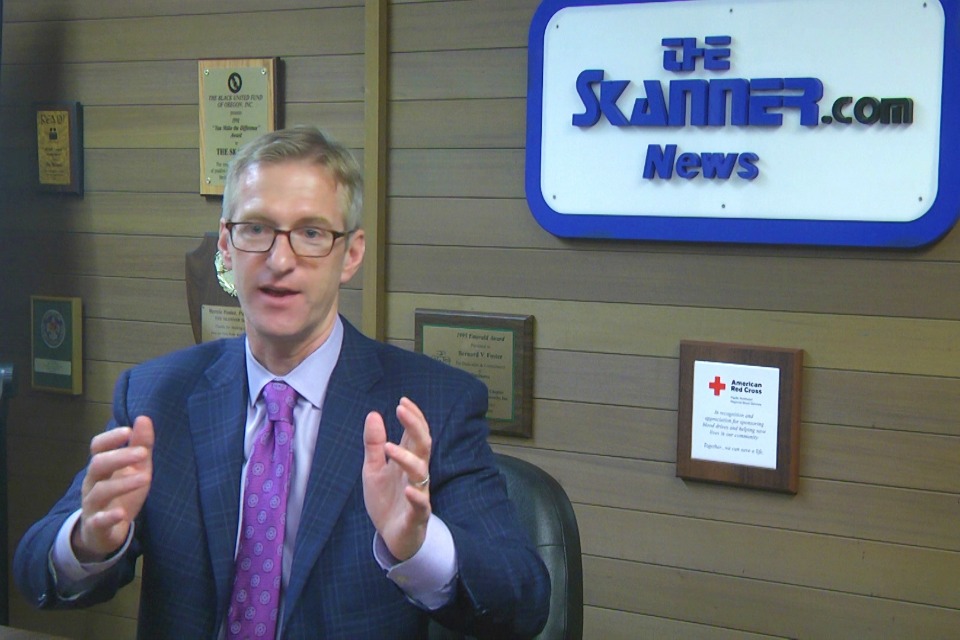 Last week, Mayor Ted Wheeler visited The Skanner’s office to talk about criminal justice reform, homelessness, national politics and what his administration has accomplished since he took office Jan. 3.

THE SKANNER NEWS: Six months is not a lot of time, but in those six months, what do you feel you’ve accomplished?

TED WHEELER: I see myself very much as a transitional mayor. We’re going from being a city that is a medium-sized city to one that is truly becoming a global city. We cannot stop the number of people that are coming here. We can’t change the fact that we are very much on the radar screen nationally and internationally.

As people are aware we have significant challenges around race, which I have not shied away from calling out quite intentionally – from my City Club speech to the framing of the search that I’m conducting nationally for a police chief, to conversations that I’ve had in the community.

We’re becoming a more diverse community, but at the same time, the number of African Americans in our community is declining. We have not yet found the right frame for that conversation and that success.

Getting more to what we’ve actually done, we balanced the budget with little fanfare, created some good opportunities – a $600 million program to invest in infrastructure, predominantly transportation, civic and parks infrastructure. We created the community service officer program, which is part of the reform package that I initially put on the table, around police reform. These are non-sworn officers who will not carry weapons, who will work with the community as part of our intensification around community policing.

Obviously, we’ve worked very hard on the homeless front. There are three new shelters that we’ve opened since I took office through partnerships with private-sector developers and real estate people that has made an impact on street homelessness. We’ve obviously, now, successfully passed our housing bond, and we’ve put into place both the advisory committee and the oversight committee that will be responsible for making sure that that $250 million investment in workforce and lower-income housing is very successful. I’ve worked with Commissioner (Chloe) Eudaly to make sure that all of the thousands of workforce and lower-income housing units that are in the pipeline for permitting, that we see those go from permit to actually shovels in the ground and cranes in the air.

We now have what I would describe as the most aggressive climate action plan in the United States. And it intentionally is a just climate action plan, meaning that everybody in the community who is impacted by the plan – including lower-income folks, including people who are not typically invited to the table, including communities of color – are very much part of the process, and gain the economic benefits from making investments in renewable energy strategies, infrastructure, R & D, educational opportunities. We’re working hand in glove with the Coalition of Communities of Color to make sure that everybody benefits from that program. So those are just some of the things we’ve done in six months.

TSN: You appoint a lot of board and commissions. On some public boards and commissions, people will serve six or eight terms. Do you think those boards can become stagnated?

TW: I do think that’s a possibility, and as communities change – particularly a community changing as rapidly as Portland is – I think it is healthy to bring new people onto boards. I’m very proud, actually, of my record in the first six months, in terms of bringing new people onto boards and commissions and supporting new leadership at city hall, supporting new leadership on my team, that I think is more reflective of the community that we’re going to see in the future. I don’t need to lecture you on demographic change, but people are keenly aware of the fact that for school-aged kids under the age of 10, we have a minority-majority community.

My question as mayor is, are we doing everything on the civic side to ensure that this next generation of leaders is ready to take the lead in all institutions -- not just government, but the private sector, the nonprofit and philanthropic sectors? We’ve got to make sure that we’re setting the table for this next generation to not only be fully participatory in a meaningful way but also that they are ready to lead. And I’m highly committed to that.

TSN: On police reform, why did you decide to take the search for a new police chief nationwide, and where are we at with that?

I think it is very important in this position to make sure that given the changes that are taking place in the community, given the changes that are taking place nationally around policing, it’s very important to me, as the police commissioner,  to make sure that I have a police chief that is on board with the stated reforms that I put on the table during my campaign. It may be that Chief Marshman is the best candidate. That being said, I want to see what the national field of candidates are. This isn’t about Marshman. I just want to make sure that we have the best police chief that we can, given the agenda that I want to accomplish as the mayor of this city. The day I said that I would do a national search, he was also asked whether he thought I was making the right call or not, and he said I was, that I was making the right call. So it’s a campaign promise. Campaign promises mean something to me, and I think it’s a good idea. I think all of us should be under the assumption that at any given moment, we could be held up to a national standard in terms of our abilities.

There is definitely a culture to policing and it’s not just in Portland, but nationally.

On the whole, I’m very supportive of the work that the men and the women in our police bureau do. It’s a very difficult job and I think they do it very well. That being said, there is a culture there. That culture  and other bureaus have their cultures too. Given the fact that a sworn police officer has the authorization to use deadly force in certain circumstances makes it different than the transportation bureau and different than the budget office and different than the other city bureaus.

It is important for me as the police commissioner to make sure that our police bureau is the national model in terms of community policing, in terms of engagement, in terms of the best practices around public safety, that we fulfill the commitments around 21st-century policing and that people in our community feel truly safe in the community in every respect.

TSN: What are the city’s plans to maintain the community oversight now that COAB is gone?

TW: That’s part of the conversation that we’re having with the Department of Justice. The big frame of is respecting community input while creating a safe and respectful and productive environment for people who actually serve on the COAB to make sure that they can do the work that they need to do without being heckled or harassed while they’re trying to do it. And I think we’re talking through a couple of ideas that could help us respect both of those competing interests. I’m actually pretty optimistic on that front.

TSN: Switching to transportation, there’s been a lot of talk in Vancouver to restart the Interstate-5 bridge again. What’s your feeling about that? And what, if it were to happen, would the city’s feeling on this be?

TW: Here’s the bottom line: the bridge definitely needs to be replaced. It is antiquated, it is on wooden pilings, it is highly subject to seismic activity. It is a major transportation link on the West Coast.

Here’s the “however.” When this process started, you’ll recall one of the signature achievements that I’m most proud of as the former Multnomah County chair was the Health Disparity Initiative, which became a national model in terms of looking at how decisions we make – around urban planning, around transportation planning, around other issues – can disproportionately impact communities of color and low-income people. It is not accidental that I-5 and I-84 run right through the heart of the historic Black community in the city of Portland. That was intentional. It was the path of least resistance.

TW: Absolutely, and the result of that placement is that asthma, stress levels, blood pressure issues – all of those things come in higher concentrations in those immediate corridors. So when this idea came forward to re-engineer the I-5 corridor we made sure that the county was in there with the report on health disparity and the impacts. I want to make sure that any new project has that exact same impact analysis taking part. Number two,  there has to be a real-world financial plan and we never quite got there with the last iteration. And it’s got to be bi-state. As state treasurer, I was very skeptical of an Oregon-only solution. Why would we and our taxpayers take all of the financial risk for something that has a clear benefit for two states? And in fact, I can make the argument that California and British Columbia benefit from it as well. And yet Oregon was going to take all of the risk and issue all of the bonds and put our state’s credit rating at risk – that’s not going to happen under my leadership.

If we do this – and I think this is, we’re a long way from there, but if it gets there, I want to see a real-world financial plan. In addition, since we have to start from scratch, let’s start looking at some of those alternative strategies that would reduce traffic that were discounted more or less early in the process without a real thorough vetting. We have a chance here to do it right and, last but not least, if we don’t have two governors who are fully supportive and willing to lead, let’s not even start. Because it’s got to be a bi-state leadership moment. The feds need to know that the region is unified and committed. And I’m ready to participate in that conversation as the mayor of Portland, but I’m most certainly not ready to go it alone. We’ve seen that that doesn’t work.

I can safely prognosticate that there will be a new bridge. The question is when. But it’s got to happen. If anything, it’s decades overdue and the community obviously has to be an active participant in getting that process going. It can’t just be a couple of elected officials behind closed doors priming the pump. The community really needs to stand up and say, “This is what we need. This is how we want it to be. These are the issues we want the government to take into account as they’re thinking about building this.”