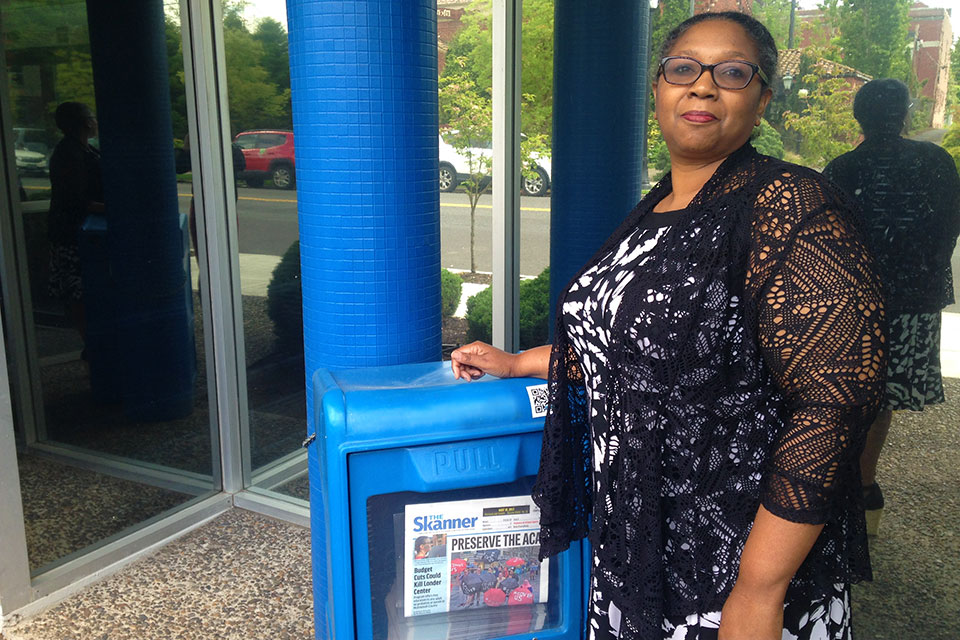 By Melanie Sevcenko | The Skanner News
Published: 18 May 2017

A native of the Pacific Northwest, Rachelle Dixon became fascinated by politics when she moved to Washington, D.C.  in 1993. As a life-long Democrat, she got her first taste of major-league politics while working on a campaign for John Kerry’s political action committee. That energy carried her through two Barack Obama campaigns.

When Dixon came back to Portland in 2009, she settled down into motherhood. But after her son graduated from  high school, she caught the political bug again. In 2016 she ran to be a Bernie Sanders delegate, before launching her own campaign for vice chair of the Multnomah County Democrats.

In January, Dixon took her elected seat as vice chair 1, of Dist. 50, and is one of only two African American women that have ever held an executive or administrative title for her party in Multnomah County. She sat down with The Skanner to discuss her role and how her party is working to resist the Trump agenda. This interview has been edited for space and clarity.

The Skanner News: How have your expectations about your seat and your party changed since you were elected last autumn?

Rachelle Dixon: The original expectation may have been that things would be more like they are on a national level. Nothing could be further from the truth (laughs). On a national level, when you enter a room on a political action campaign, there are priorities -- and the top three priorities are what everyone is focusing on. The other things are distant wishes.

Multnomah County has such diverse views among the party. You have folks that are more moderate, folks that are more leftist -- or some that might be considered more independent. I think you have less of that at the national level, where everyone moves towards the center. A lot of people have the same background – they might be attorneys, analysts – coming from very similar perspectives. I think here, at the county level, you have more diversity in thought.

TSN: How does being the first Black vice chairwoman of the Multnomah County Democrats shape your role?

RD: There’s no way I can step out of my skin, so I’m always viewing everything through a lens of equity. That’s everywhere I go, in my work life and in my private life. So definitely I’m thinking about those things. For example, Multnomah County and the Democratic Party of Oregon have worked together on caucuses; so they have groups of organizations around a particular area they’d like to pay attention to. There is a Black Caucus, there’s an LGBTQ Caucus. And one of the things I don’t see, that I’d like to have a chat about, is a social justice caucus. I see that as being a very necessary thing, so I’ll be speaking with anyone who will give me their ear on that conversation.

TSK: What is the Democratic Party, on the county level, in most need of right now?

RD: First of all, let me say that I think there are some things that are going right. And I don’t think that having different voices in the room, saying different things is problematic. All of that together is what is going to move us forward. I don’t think that we need to have a lock-step movement with a particular candidate with a particular ideology. I think if we’ve had any challenges in the past, that has been it.

Also, I’d like to be more inclusive of folks that haven’t had a place at the table. That goes for African Americans, Latinos, Asian Americans, and Pacific Islanders. I’d also like to see more veterans in our fold, and more labor organization participation.

So that’s really my focus. And my role – the role that is written down in our bylaws – is to educate our precinct committee persons (PCPs), which are the voting members at Multnomah County’s grassroots level. But I realize that the public needs some of the same tools that the PCPs have.

TSK: Is there a sense, within the Multnomah County Democrats, of pushing back against the national Trump agenda?

RD: Definitely. I think for a lot of people, prior to Trump being elected, democracy was secure and their own personal rights were secure. But with the election of Trump, they no longer feel that way, and I would agree with them. So a lot of the conversation is around what we can do to resist Trump and his assault on the Affordable Care Act, his assault on women, his assault on labor. He would most certainly like to give the keys to the kingdom, in terms of tax breaks to the very wealthy, while working folks are very much struggling to afford basic things, like housing.

But I think for many people, Trump has been the catalyst for getting involved. There are hundreds of people coming through the door each month now, asking, what can I do, how can I be involved?

I think the challenge going forward would be to keep that sense of outrage. It’s very hard to stay outraged for long. I try to tell people we’re in it for the long haul, and democracy is never safe. You can see your rights eroded in a matter of a year or two. So I’d like to see Multnomah County Democrats channel that energy and outrage into effective ways so more people can stay engaged.