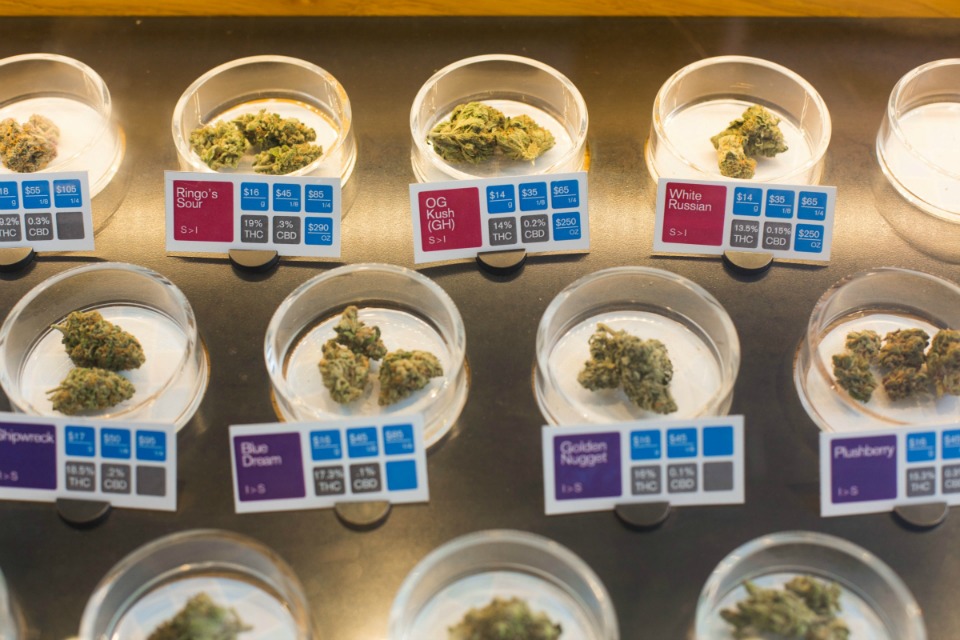 Jesce Horton struggled in math classes growing up. While a student at Florida State University, though, he discovered a surprising study aide: marijuana, which helped him earn a bachelor’s degree in engineering.

After graduating, he worked as an energy consultant in a variety of U.S. cities and in Germany. When he moved to Portland in 2013, he became acquainted with two people who used marijuana to treat medical conditions: one had cancer, and one had chronic knee pain. He started growing medical marijuana at home, and at the same time, found himself losing interest in his day job.

Horton went on to found a dispensary, Panacea, on Sandy Boulevard, and the Minority Cannabis Business Association – which provides technical assistance for racial minorities trying to break into the legal marijuana industry.

The organization also advocates for an end to the War on Drugs and redress for the way it has harmed minority communities.

“There’s so much low-hanging fruit,” he said. “There’s a lot that can be done.”

From ‘big-time consumer’ to entrepreneur and advocate

Horton told The Skanner that until a few years ago, he was merely a “big-time consumer” of cannabis. But the War on Drugs affected Horton, who is African American, personally: in college he had a few misdemeanor arrests on marijuana-related charges, and in the early 1980s his father served time in prison after being arrested on cannabis and cocaine possession charges.

The trend towards legalization has meant big money for legalizing states – Oregon pulled in $25 million in tax revenue in its first year and birthed an industry with its own trade magazines and trade shows. Just a few years ago, marijuana growers and dealers in Oregon and other states ran their businesses quietly and at great personal risk, but after Oregon voters legalized marijuana in 2014, dozens of clean, brightly-lit dispensaries sprang up.

But the green boom has almost overwhelmingly benefited White entrepreneurs.

There are multiple reasons the industry has so far not enriched many people of color. One is jurisdictions to legalize marijuana – Washington, Colorado and Oregon – have large White majorities.

Another reason is that despite increasingly permissive attitudes toward marijuana use, African Americans, Latinos and Native Americans are more likely to be arrested on marijuana charges.

State and national data from the ACLU also showed an increase in the number of marijuana-related arrests between 2000 and 2010, both in Oregon and nationwide – despite a trend in more socially relaxed attitudes toward the drug, borne out by surveys and by successful voter initiatives to legalize medical and recreational use of the drug. In 1973 Oregon became the first state to decriminalize possession of small amounts of pot; Oregon voters passed a measure to legalize medical use of cannabis in 1998, and legalized recreational marijuana in 2014.

Despite the increased legal permissiveness, 2013 report by the American Civil Liberties Union found major racial disparities in rates of arrest for marijuana possession nationwide, despite no significant difference in personal use, with African Americans being 3.73 times as likely to be arrested on marijuana charges as Whites. (Oregon’s numbers are right in line with the national trend; Black Multnomah County residents are more than three times as likely to be arrested for marijuana use as their White counterparts.)

In some jurisdictions, having any criminal record is a barrier to access to the industry. Horton has worked directly with the state to reduce the barrier in Oregon for those with misdemeanor convictions.

Another problem is access to capital. White Americans are much more likely to have the capital necessary to start a business of any kind, and that’s key for those wanting to enter an industry banks won’t work with.

Horton said the rule of thumb is that those interested in getting into the industry need about $250,000. Most minority growers and dispensary owners he knows raise funds by reaching out to their families or others in their networks, he said.

Other types of regulations can be a hurdle as well.

Adrian Wayman’s business model – a subscription delivery service – was illegal in the city of Portland until December, when the city council voted to approve it.

Wayman told The Skanner he worked closely with the city council to ensure officials the model, which is legal in the state, would be safe.

“We worked to ensure that all of our drivers are safe, the community is safe, and providing proper access to the right people and I think me being a young gay Black male, I think it’s not generally something you see in the cannabis business,” Wayman told The Skanner. It’s mostly young White men.”

Whatever systemic barriers exist for people of color seeking to get into the legal marijuana industry, it’s also one whose future is uncertain.

That’s because the drug is still illegal at the federal level. The Obama administration explicitly did not take federal action against states that had voted to pass recreational marijuana laws.

While campaigning, Donald Trump said he considered legalization "a states issue," but his newly appointed attorney general, Jeff Sessions, has a long history of opposing legal marijuana, most recently saying he considers it “more dangerous than heroin.” That he also carries a poor record on racial justice is not encouraging, though so far he has not taken federal action to crack down on legal states and has hinted he won’t.

“Where I am more concerned is from the criminal justice aspect and where and how the feds choose to prosecute when they do have the ability do it,” Horton said of a potential federal crackdown on pot, and can see a potential uptick in cases like that involving Devontre Thomas, a Native American teenager who was nearly prosecuted by the federal government for possession of a gram of cannabis on tribal land. “From that standpoint I am a lot more worried.” (A likely case in point: on Tuesday, Willamette Week reported that Luis Gerado Zazueta, 21, faces deportation for selling a small amount of cannabis to a high school friend three years ago.)

On the other hand, Horton said the industry as a whole appears to be safe -- for now.

In addition to advocating for and assisting those interested in the industry, Horton’s organization also holds expunction clinics to help anyone who is interested clear their records of nonviolent marijuana charges, and advocates for reinvestment in communities harmed by the War on Drugs as well as the reduction of drug penalties.

“It’s not just about how do you get into the industry, or get a job or own a business. It’s also about these communities, they may not want to get into the industry or even consume cannabis. It doesn’t mix for everyone, but they’ve still been affected by the War on Drugs,” Horton said.