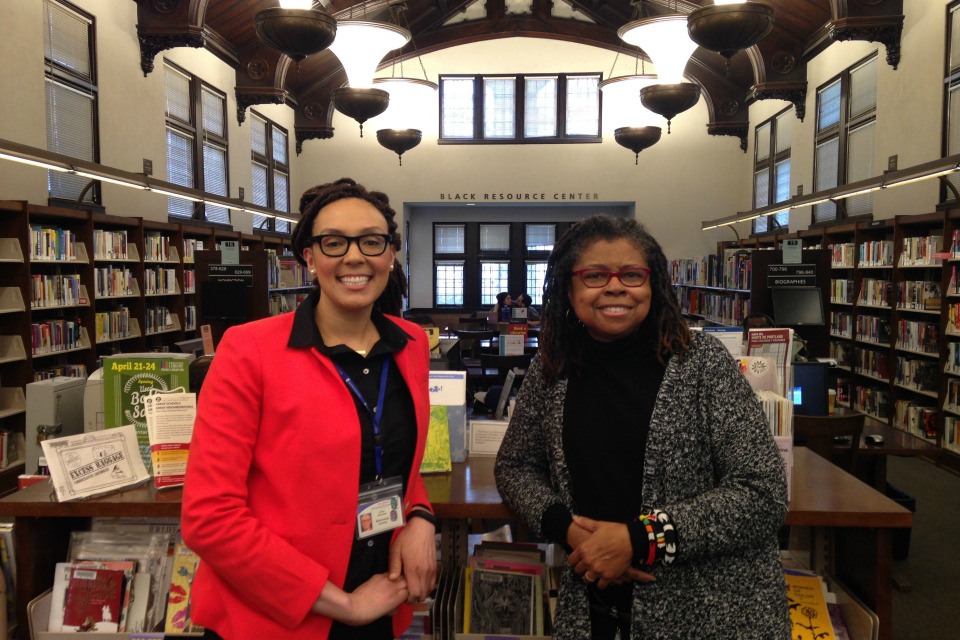 Patricia Welch first fell in love with reading during story time at her public library in Baltimore.

She read everything – books, magazines, even the old newspapers her grandmother would lay out on the floor after waxing it.

“I just enjoyed reading,” said Welch, who cites “Long Division” by Kiese Laymon and “This Side of Home” by Portland-native Renée Watson as her current favorite books. “It made me happy, especially when I figured out that I could learn things that adults didn’t even know about.”

Her junior high librarian also made an impression. She seemed to know everything, remembers Welch, and she always dressed so elegantly, which the young girl looked up to. Yet Welch never considered becoming a librarian until a career questionnaire in Seventeen magazine planted the seed.

She went on to earn a master’s in library sciences from the University of Michigan’s School of Information, and for twenty years has been the administrator at the North Portland branch of the Multnomah County Library.

It’s a position that brought her from Detroit to the Rose City – and the broader Pacific Northwest – for the first time in October of 1996.

Welch recalled her initial reaction to the North branch, when she discovered its Black Resource Center, a collection of over 7,000 items including scholarly and popular African American literature, children’s books, films, periodicals, and music.

Welch wanted the job so bad, she gleefully told The Skanner, that she went to Nordstrom’s before her big interview and bought the most expensive suit she’s ever purchased.

“And I got the job!” she grinned, letting out a big laugh.

On April 1, Welch will retire from her post and pass the baton to Kirby McCurtis, a young African American woman who is currently the branch’s youth librarian.

“She’s smart, committed, efficient, but she also has heart,” Welch said of McCurtis, who in 2013, received Library Journal’s Mover & Shaker award for her efforts in community building.

Welch herself is no stranger to esteem. In February 2015, she was honored with the Flemming Award for her commitment to social justice by the Multnomah County Managers of Color, during its Black History Month celebration. Dr. Arthur Flemming was the Secretary of Health, Education and Welfare, under President Dwight D. Eisenhower. He was also appointed Chairman of the U.S. Commission on Civil Rights and fought for racial equality, before serving as president of the University of Oregon.

Portland has never been well-known for diversity, Welch emphasized during her interview with The Skanner. And in fact, the librarian had had her eye on Atlanta as a career destination. But when she landed in the Rose City, she was surprised.

“People were very welcoming to me, beyond anything I could have ever have expected,” said Welch.

She was readily invited to social events with diverse groups, and soon got involved with the employee resource organization, Managers of Color, which works to enhance cultural diversity in Multnomah County.

Over the decades, Welch has helped make her branch a leader in adult programming. She’s also exhibited the work of local artists, partnered with PassinArt to host a Juneteenth celebration, and has continually encouraged the community to engage in Black literature.

That effort has come to fruition through the library’s annual African American Read-In, a national event which Welch kick-started in Portland, as well as through the integrity of the Black Resource Center.

Launched in 1987, the collection is unique to the North Portland branch, and also in its selection of first editions, including titles by Maya Angelou, W.E.B. Du Bois, and James Baldwin.

“I’m happy to know that before I even got here, Black people in this community used this library and cared enough about it to say, ‘We’re not seeing ourselves here.’ They raised the money to establish this collection.”

“African American reading is not just for Black people,” continued Welch. “This is a genuinely fantastic collection for anyone. It speaks well to the system to have this collection, but it also enriches this neighborhood.”

McCurtis, who will take the reins as an interim administrator, said she intends to keep the legacy of the library’s Black literature intact, while finding ways to reinvigorate it.

“With the collection, we’re trying to make sure that it gets more attention, on the website and at different branches,” she said.

Originally from San Diego, McCurtis received her master’s degree from UCLA. She came to the North branch back in 2012, when she applied for the youth librarian position, which specifically called for an African American candidate.

“I thought that it was really neat that they were acknowledging blind spots and really wanted to reach out to this community to get them into the library,” recalled McCurtis.

For her, literacy has always been a powerful tool for communities, especially in less diverse regions. “I do Black story time here and there are white families that come because they want their kids to be in a multicultural society,” she said.

And for Welch, McCurtis is the right mix of fresh energy and ingenuity.

“She is what I call a stand up sister.  She is the one I’ve been waiting for, that’s why I can retire,” she said, smiling wide. “I love this branch. This has been my baby, and I’m not turning my baby over to just anybody.”

Welch is looking forward to retirement, but said she will stay connected to the branch by heading book clubs. She admits to loving science fiction and fantasy books with Black protagonists, and mentioned the authors Tananarive Due, Octavia Butler, and N.K. Jemisin among her favorites in the genre.​

On her departure, Welch reflected with gratitude: “I’m proud of the programming we’ve done, the collection we’ve been able to maintain. And I am so proud that the staff at this library has always been one that understood our job is to serve the public and extend the hand of welcome.”