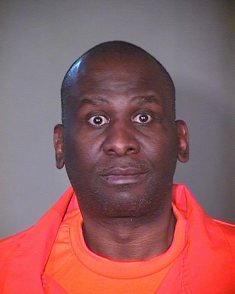 FLORENCE, Ariz. (AP) -- A man convicted of killing two people in a 1989 Phoenix convenience store robbery was executed Tuesday despite last-minute arguments by his attorneys who raised questions over one of the lethal injection drugs and said there was "substantial doubt" about his guilt.

Eric John King's death at the state prison in Florence was Arizona's first execution since October and one of the last expected to use a three-drug lethal injection method.

As the death chamber's curtains opened, King smiled broadly at someone he knew and waved with a hand under a sheet that covered him to his neck. When asked if he had any last words, the 47-year-old calmly and firmly said, "No." He then looked around at the estimated 30 witnesses in the room, at times smiling.

As he was sedated, King breathed heavily for several seconds then appeared to go to sleep.

Corrections Director Charles Ryan announced that King was declared dead at 10:22 a.m., 13 minutes after a medical staff member walked into the death chamber and confirmed that King had been sedated.

King had maintained his innocence since his arrest, and his lawyers fought until the last minute to get his sentence reversed or delayed.

Defense attorney Michael Burke said after the execution that there is no way to know whether King experienced pain after first being injected with sodium thiopental, a sedative that Burke has argued could be ineffective. The second drug paralyzes the inmate before potassium chloride is injected to stop his heart, so if the sedative doesn't work through the entire procedure, King could have been in pain without any way to show it.

"You'd have no way of knowing if he was in pain or not," Burke said. "As an observer, he closed his eyes and took some breaths, and I didn't see him move after. It doesn't really give me any solace."

The Arizona Supreme Court declined to stay King's execution Monday after Burke argued that the state should wait until it enacts its new lethal injection protocol. The U.S. Supreme Court refused to intervene.

Ryan announced Friday that Arizona will switch to using just one drug in an effort to allay any "perceived concerns" that sodium thiopental is ineffective, but only after the scheduled executions of King and Daniel Wayne Cook on April 5.

Burke had argued that the Department of Corrections may have engaged in fraud when it imported the sedative from Great Britain by listing it on forms as being for "animals (food processing)," not humans. The state said the mislabeling resulted from a clerical error.

Arizona obtained the drug legally, and that's why it has been able to avoid problems other states have had, Assistant Attorney General Kent Cattani has said. Georgia's supply of sodium thiopental was seized by federal Drug Enforcement Administration agents on March 15 over questions about how it was obtained.

The drug is part of the three-drug lethal injection method used by nearly all 34 death penalty states, but it became scarce last year after the sole U.S. manufacturer stopped making it.

Texas and Oklahoma recently announced they are switching from sodium thiopental to pentobarbital in their three-drug protocol. Ohio has switched to using only pentobarbital for its executions, and Ryan said that's the drug Arizona might start using.

Burke also was unable to successfully argue that King be granted clemency at a hearing Thursday. Burke had argued that the two key witnesses who testified against King at his trial have changed their stories, that no physical evidence exists and surveillance video used at trial was of extremely poor quality.

King was convicted of fatally shooting security guard Richard Butts and clerk Ron Barman at a Phoenix convenience store two days after Christmas in 1989. Butts and Barman both were married fathers whose families have testified that their deaths in a robbery that netted just $72 devastated them.

"The families of the victims in this case may now take some comfort in knowing the criminal who deprived his victims of their lives and robbed their families of their loved ones has paid for this terrible crime," Attorney General Tom Horne, who witnessed the execution, said in a written statement.

Only one person who knew the victims witnessed the execution, and it was unclear whether that person was a family member. Corrections spokesman Barrett Marson couldn't immediately say who it was.

Shortly before the killings, King had been released from a seven-year prison term on kidnapping and sexual assault charges. Police say King, who was 18 at the time, and another man kidnapped a woman and took her to an abandoned house, where both repeatedly and brutally sexually assaulted her over six hours.

Court documents show King had a troubled childhood. He was one of 12 siblings whose alcoholic, abusive and mentally disturbed father died of a heart attack when King was 11, according to court records.

Records also say King's mother struggled to provide for the children, who were so hungry at times that they tried to catch crawdads in irrigation canals and frequently were without electricity.

None of King's family members was present for the execution, but his son, 20-year-old Eric Harrison, asked the clemency board Thursday to spare his father.

"This is the first time I've ever seen my dad, ever in life, and I know I love him," Harrison said at the hearing. "That's my dad. He gave me life. Just don't take him."

King is the 23rd death row inmate Arizona has executed with the three-drug method since it began using lethal injection in 1993.

The state had previously executed 38 inmates with lethal gas since it started using that method in 1934. Another 28 inmates were executed by hanging between 1910 and 1931.