'Reconciliation' Worked for Bush, Should Work for Obama

Last week the President held a health summit with the congressional Republican and Democratic leaders. The result was what we all expected: nothing.
Now the nation is waiting for President Barack Obama to announce this week what he will do next on the health care issue – will he keep trying to talk Republicans into coming to some agreement with the Democrats, or will he maneuver a straight-ahead majority vote using the 'reconciliation' strategy and just get it over with?
Reconciliation, often used by former President George Bush, allows the senate to pass legislation with a simple majority of 51 votes rather than requiring the usual super majority of 60. Bush used this parliamentary maneuver in 2001 to pass tax breaks for the wealthy.
It worked for Bush – why shouldn't it work for Obama?

Since Obama has tried to go along to get along, he has fumbled away the health care reform strategies that might have served the majority of people in this country most effectively. The very least he can do is light a fire under the reform bill now on the table and stop worrying about what the sore losers will say about it afterward.
He may regret it now, but Obama made big campaign promises about health care reform during his run for president. If he uses the reconciliation strategy to push through the legislation he might not be re-elected – but at least he would be making some kind of name for himself as accomplishing something important for the American people. To fail would be a disaster to his presidency and the nation.
Last week John McCain said to Obama, "Both of us during the campaign promised change in Washington." President Obama responded, "We are not campaigning anymore … the election is over." You said it, Mr. President. So what are you waiting for?
Former-President Bush never wasted time wondering what the Democrats thought or wanted, and like it or not, he got things done. 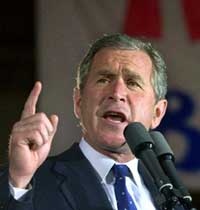 However Obama has the opposite problem: Right now there is no way the situation could possibly be worse. Health care costs are rising for small businesses, many Americans can't afford the higher premiums and are losing their homes to medical-related debt – tens of millions can't get medical help at all.
The recent Supreme Court decision to remove limits on corporate spending on campaigns promises to throw gasoline on this fire. These big corporations now can spend any amount of money to defeat any candidate.
So Mr. President, leave your legacy. We urge you to push through health care using the 51 votes.