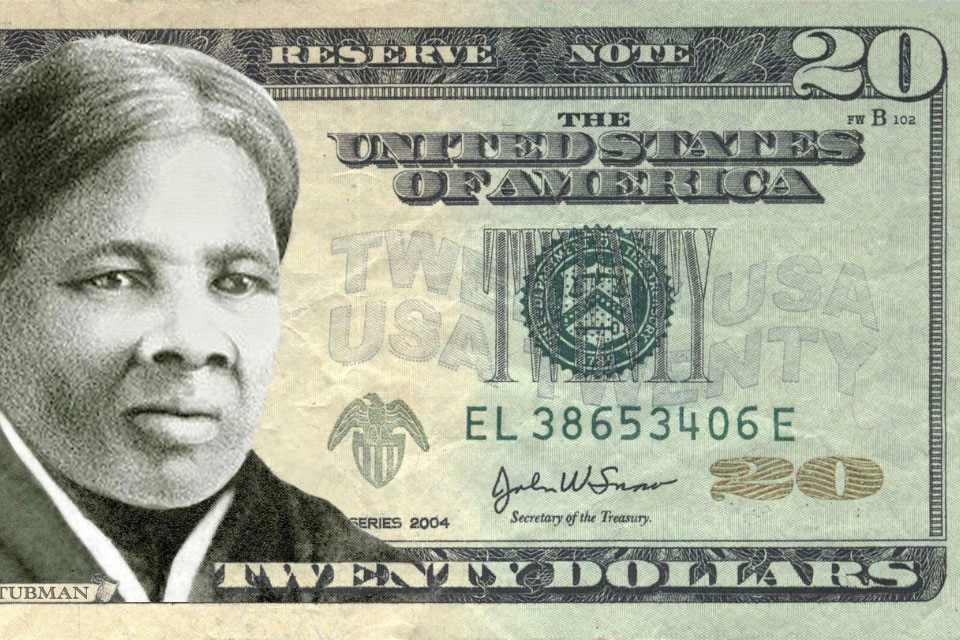 With uniquely American hypocrisy, the Trump Treasury Department has pushed back the 2016 plan to put escaped slave and Underground Railroad heroine Harriet Tubman on the $20 bill. Tubman would be the first African-American woman featured on U.S. currency.

The $20 currently features a former president, Andrew Jackson, who not only owned slaves, but ordered the death march of thousands of Native Americans. Euphemistically called “Indian Removal,” the Trail of Tears made way for White settlers to claim millions of acres of southern land.

The attempted erasure of Tubman represents yet another move in the Trump playbook to disconnect racial reality from White fantasy.

In the fantasy of White supremacy, traitors like Jefferson Davis and other Confederates are memorialized for being freedom fighters — the freedom of Whites to own Black human beings and work them to death — while a woman who risked her life time and again to free enslaved people is simply dismissed. Ignored. Erased.

In the fantasy of White supremacy, White people are always justified in killing unarmed Black men, women and children, either with their own guns or by aiming the unquestioned power of the police. No act is too repugnant, even those resulting in the sexual abuse or death of immigrant children in American custody, if it can be framed as a defense of White superiority.

In the fantasy of White supremacy, the FBI spent millions in time and treasure to plant false evidence of Communist influence on Martin Luther King — while in reality, Russians today are using the racial tension in American to incite violence and paralyze our society, while they work towards global dominance.

By erasing Tubman, the Trump forces again deploy their most effective weapon in the quest to maintain power— the unholy alliance of racism and misogyny.

Because in America, it seems, freedom is for Whites only, and more specifically, for White men.

To be sure, Trump has ordered his own digital Trail of Tears, as he rolls back civil rights protections for people of color, for women, for immigrants fleeing starvation or oppressive regimes, for LGBTQ people, for the poor and the voiceless.

And currently, the cognitive dissonance in America has reached a new, critical level of psychosis. As a nation we exalt independence, freedom and equality—we boast of our shining city on the hill. Yet our shining city was built on genocide of the native peoples, enslavement of Africans and exploitation of immigrants.

Without a doubt, every people and every culture on Earth have had to deal with unpleasant facts of its history—America is not special in that regard. Where most of White America goes off the rails is in completely denying and minimizing the facts of racial oppression. This erasure makes racial reconciliation—and true equality—impossible to achieve.

In 2019, Harriet Tubman should be a respected and lauded icon for people of every race and ethnicity. Did she not personify American ideals, at the risk of her own life? As a Black woman in antebellum times, she was vulnerable to capture, prison, assault or lynching, but did she falter? Did she not refuse to kneel to any man or any king? Did she not fight for freedom against overwhelming odds?

Are these not the qualities we hold dear in our American heroes?

Instead, Tubman is erased.

Instead, our current administration embraces the slave owner, the mass murderer, the White supremacist—and calls him a hero.

For a psychiatric patient—in this case, White America—the reality of racism, misogyny and oppression is incompatible with their self-identity as lovers of freedom and defenders of equality. But instead of taking the painful but therapeutic steps to achieve reconciliation and closure, the patient has opted instead to self-medicate, and maintain the delusion of White supremacy at all costs.

Jackson, a president who authored one of the cruelest and most brutal acts in American history, is a Trump hero, which is perfectly logical — they share a deep, entitled belief in the superiority of White men, and a world order in which Manifest Destiny is not a just doctrine but a divine right.

Jackson should never be forgotten. He should be remembered always as an example of what kind of horrors our leaders can inflict when their values and morals are wildly askew.

Trump will be remembered in the same light— if enough of us survive to tell the story.

And despite their best efforts, the legacy of Harriet Tubman can never be erased. She embodies the spirit of everything our nation claims to stand for, and each one of us — every race, every gender — should be proud to call her our fellow American.

A. Scott Bolden is the current Managing Partner of the Washington, D.C., office or Reed Smith and former At-Large Member on the Executive Committee of the firm. As a prominent trial and White-collar defense lawyer to whom companies and individuals turn for representation in their most significant concerns, Scott has handled some of the most high-profile matters in and outside the nation’s capital and is very comfortable handling matters on the national stage. He is particularly adept at assisting clients in navigating crises that present significant legal, business and reputational risks.