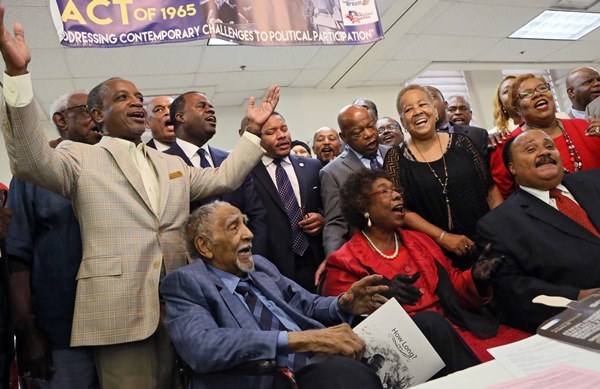 Oregon Secretary of State Jeanne P. Atkins invites Oregonians to join her in commemorating today as the 50th anniversary of the Voting Rights Act, signed into law by President Lyndon B. Johnson on August 6, 1965.

The Act outlawed discriminatory voting practices, such as literacy tests and poll taxes, which were adopted after the Civil War to prevent African Americans from registering and exercising their right to vote. It also established new legal protections for minority voters at the polls.

“At a time when politicians in many states around the country are acting to suppress the voting rights of minorities, youth and the disadvantaged, Oregon stands out as a beacon of inclusiveness and fairness,” Atkins said. “We are working to make it even easier for Oregonians to become voters and cast their ballots.”

Oregon has a long-standing tradition of ensuring voting is accessible, convenient, and secure. In 1998, Oregon led the nation with Vote-by-Mail system for all elections and became the national model for making voting as accessible as possible.

“Once again we are leading the nation with the Oregon Motor Voter Act” Atkins said. “This program will make it easier for every eligible Oregon citizen to be registered to vote

As it was 50 years ago, and as it has been since the founding of our nation,  “the fate of our democracy depends on preserving and upholding access to the ballot,” Atkins said.

In the words of Dr. Martin Luther King, “So long as I do not firmly and irrevocably possess the right to vote I do not possess myself. I cannot make up my mind—it is made up for me. I cannot live as a democratic citizen, observing the laws I have helped to enact—I can only submit to the edict of others.”

To learn more about registering to vote and casting a ballot in Oregon, visit OregonVotes.gov.

About the Oregon Secretary of State

The Secretary is Oregon’s chief elections officer, auditor and archivist. Additionally, the Secretary of State promotes job growth by streamlinin​g the creation and expansion of business, authenticates documents for travel or study abroad, and offers notary training and listings. Oregon is the only state where the secretary of state is responsible for auditing public spending. In addition, the secretary serves with the governor and treasurer on the Land Board and manages and oversees Oregon’s Common School Fund.