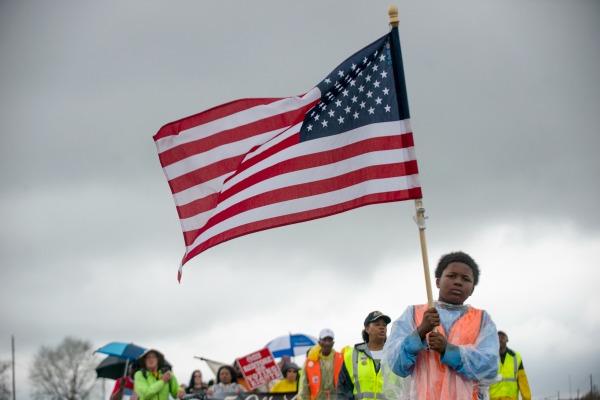 Zion Small, 9, carries the American Flag while leading a five day march on Wednesday, March 11, 2015, from Selma to Montgomery organized by the Southern Christian Leadership Conference. The march started on Monday and is scheduled to finish at the Alabama Capitol in Montgomery, Ala., on Friday. (AP Photo/Montgomery Advertiser/Albert Cesare)

Fifty years ago I traveled from Mississippi to Selma, Ala. on March 21, 1965 to join Dr. Martin Luther King, Jr. and thousands of fellow citizens marching the 54 miles to the steps of the state’s capitol in Montgomery.

Millions of Americans now know about this march thanks to the movie “Selma” and the recent 50th anniversary celebration. Selma was the site of a courageous voting rights campaign by Black citizens that was met by brutal Southern Jim Crow law enforcement and citizen violence.

The nation was shocked two weeks earlier when John Lewis and Hosea Williams set out on a nonviolent march with a group of 600 people toward Montgomery to demand their right to vote and were brutally attacked by lawless state and local law enforcement officials at the Edmund Pettus Bridge.

The televised images of “Bloody Sunday” and the savage beatings of the marchers – including Congressman Lewis whose skull was fractured – were a pivotal moment in the Civil Rights Movement and in America’s struggle to become America.

It provoked the thousands of us (ultimately about 25,000) who came together later to finish the march, safer thanks to U.S. District Court Judge Frank M. Johnson, Jr.’s order that we had a right to peaceful protest and with federalized Alabama National Guard protection. And we were buoyed by President Johnson’s March 15, 1965 address calling on Congress to pass what became the Voting Rights Act of 1965.

In that speech –   “The American Promise” – President Johnson said: “This was the first nation in the history of the world to be founded with a purpose. The great phrases of that purpose still sound in every American heart, North and South: ‘All men are created equal’—‘government by consent of the governed’—‘give me liberty or give me death.’”

President Johnson also said: “Should we defeat every enemy, should we double our wealth and conquer the stars, and still be unequal to this issue, then we will have failed as a people and as a nation.”

Fifty years later, speaking at the Edmund Pettus Bridge, President Obama echoed the same themes: “[Selma is] the manifestation of a creed written into our founding documents… These are not just words. They’re a living thing, a call to action, a roadmap for citizenship and an insistence in the capacity of free men and women to shape our own destiny.”

The first Selma march was planned not only to gain the right to vote but to protest the tragic death of Jimmie Lee Jackson, a 26-year-old Black church deacon and Vietnam veteran killed in Marion, Ala. when he, his mother, sister, and 82-year-old grandfather attended another nonviolent voting rights demonstration where marchers were brutally attacked by racist Alabama law enforcement officials who broke it up.

Jimmie Lee Jackson was shot and beaten trying to shield his grandfather from a police nightstick. What a terrible irony that in this year of celebration of the Selma marches we are witnessing the resurgence of overt law enforcement brutality and injustice in Ferguson, Cleveland, New York City, and elsewhere, reminding us how far we still have to go.

Don’t tell, laugh at, or tolerate racial, ethnic, religious, or gender jokes—or any practices intended to demean rather than enhance another human being. Walk away from them. Stare them down. Make them unacceptable in our presence and in our institutions.

Through daily moral consciousness each of us has a responsibility to counter the proliferating voices of racial and moral and ethnic and religious division that are regaining respectability over our land. Let’s face up to rather than ignore our growing racial problems that are America’s historical and future Achilles’ heel unless addressed firmly and courageously.

Let us all stand up right now to all those in our Congress, statehouses, and across our country who are trying to take away and suppress the right to vote and who are refusing to honor the sacrifice of all those who died to gain this fundamental American right. Shame on them and shame on us if we don’t act to insist that Congress renew the Voting Rights Act without a minute’s more delay.

And shame on us if we do not stand up to all those who seek to turn the clock of racial progress backwards by denying equal justice under the law for all. We still have so far to go in our march to make America America—but we must march forward and never backwards.

Marian Wright Edelman is president of the Children’s Defense Fund whose Leave No Child Behind® mission is to ensure every child a Healthy Start, a Head Start, a Fair Start, a Safe Start and a Moral Start in life and successful passage to adulthood with the help of caring families and communities. For more information go to www.childrensdefense.org