A Twisted View of Black on Black Crime 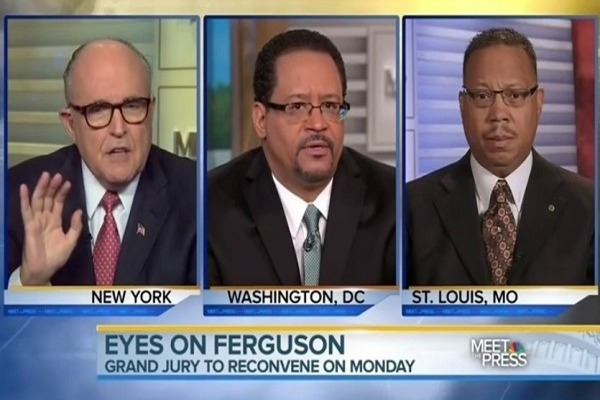 In the aftermath of a Black teen being killed in Ferguson, Mo., former New York City Mayor Rudy Giuliani was asked a simple question on the NBC television’s “Meet the Press.” Do you think that Blacks have a legitimate complaint about racial discrimination by police in their communities?

As the Washington Post observed, “Former New York mayor Rudy Giuliani (R) offered some now-infamous analysis of the situation in Ferguson, Mo., on “Meet the Press” on Sunday. ‘White police officers wouldn’t be’ in black neighborhoods, killing black men, ‘if you weren’t killing each other.’

“This wasn’t Giuliani’s only point, but it was the one that spurred the most online reaction. Giuliani also reiterated a version of a statistic that has been common in the wake of the fatal shooting of Michael Brown earlier this year. ‘I find it very disappointing,’ he said, ‘that we are not discussing the fact that 93 percent of blacks are killed by other blacks.’ He insisted to another member of the panel, Georgetown professor Michael Eric Dyson, that ‘I would like to see the attention paid to that than you are paying to this.’”

A Justice Department report on homicides committed from 1980 through 2008 found that 93 percent of Black homicides were perpetrated by other African Americans. Giuliani conveniently neglected to note that the report also showed that 84 percent of White homicide victims were killed by other Whites.

It’s not just a matter of Blacks killing Blacks and Whites killing Whites. Most homicides are committed by people who know their victim, usually a spouse or acquaintance.

So, it was disingenuous for Giuliani to assert that Blacks are “killing each other” as though that’s a phenomenon unique to African Americans.

The FBI annual compilation of crimes does not break down the race of people killed by police. However, the public interest website ProPublica studied federal data from 2010 to 2012 and concluded that young Black males were 21 times more likely to be killed by police than their White counterparts.

Giuliani, never considered a friend of African Americans, would probably be even more enraged if most Whites were being killed by Blacks. Yet, he pretends to be concerned about the loss of Black life at the hands of Blacks.

As we have seen in Ferguson, with Officer Darren Wilson killing Michael Brown, long before a police officer fires his weapon at an unarmed Black target, he frequently harbors certain misperceptions about the person at the other end of the gun barrel.

In the case of Wilson, he testified before a St. Louis County grand jury: “And when I grabbed him, the only way I can describe it is I felt like a five-year old holding on to Hulk Hogan.” [Grand jury transcript, Volume 5, page 212, line 21]

Wilson testified that he stands a shade under 6’4” and weights “210-ish.” Michael Brown was listed as 6’4” and weighed nearly 300 pounds.

Wilson was the same height as Brown and though the teenager enjoyed about a 90-pound weight advantage – which could be considered a disadvantage – Wilson was armed with a Sig Sauer P229, .40 caliber pistol loaded with 12 bullets, a nightstick and mace. With those clear advantages, along with the ability to call for backup help, which he had exercised, there was no reason a trained police officer should have felt “like a five-year old” holding on to a 6’7,” 302-pound professional wrestler.

Clearly, Wilson was also armed with certain stereotypes of young Black males and that may have affected his poor decision-making on that fatal day in Ferguson, Mo.

Both Rudy Giuliani and Darren Wilson are entitled to have their opinions of African Americans, however flawed. But their biases should not cost Michel Brown or anyone else their life.