Differences in Black and White 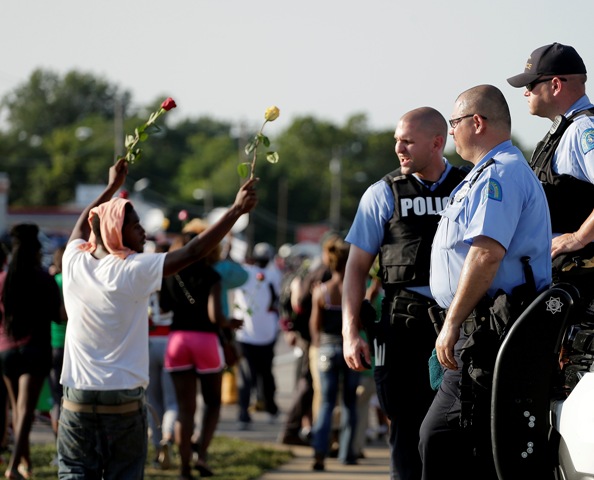 Police watch as protesters march Tuesday, Aug. 19, 2014, for Michael Brown, who was killed by police Aug. 9 in Ferguson, Mo. Ferguson's leaders urged residents Tuesday to stay home after dark to "allow peace to settle in" and pledged several actions to reconnect with the predominantly black community in the St. Louis suburb where the fatal shooting of 18-year-old Michael Brown has sparked nightly clashes between protesters and police. (AP Photo/Charlie Riedel)

Public opinion polls confirm a fact that has been documented in instances ranging from the O.J. Simpson verdict to recent events in Ferguson: When it comes to race, Blacks and Whites largely view events through a different set of lenses.

According to a recent New York Times/CBS News poll, more than half of Black Americans polled – 57 percent – said the killing of the unarmed, 18-year-old Michael Brown by Ferguson, Mo. Police Officer Darren Wilson on Aug. 9 was “not justified.” Among Whites, 25 percent said the shooting death was unjustified.

In addition, 31 percent of White Americans, and 71 percent of Blacks, said they think police are generally more likely to use deadly force against a person of color than a White person.

The performance of Gov. Jay Nixon, a Democrat, also received mixed reviews, so to speak. He mobilized the Missouri State Highway Patrol and then activated the Missouri National Guard after declaring a state of emergency and imposing a curfew. Blacks were twice as likely as Whites to say involving the National Guard only made matters worse.

Only a quarter of Blacks nationally are satisfied with Gov. Nixon’s actions, while nearly half said Nixon’s performance in the aftermath of the shooting was unsatisfactory. In contrast, Whites were divided: A third were satisfied and a third dissatisfied

Not surprisingly, Blacks, Obama’s most loyal bloc, continue to back him by large margins.

The New York Times poll showed that 10 percent of those surveyed thought race relations have improved since Obama has been in office, 52 percent felt they are about the same as before and 35 percent said race relations have gotten worse under Obama. Of those saying things had gotten worse, 40 percent were White and 21 percent were African American.

There are many independent markers that indicate, in general, that race relations have improved over the last half century, including attitudes toward interracial marriages. Amid such progress, however, there is undeniable evidence that Blacks and Whites look at racially-tinged events from a different perspective.

A survey conducted by the Pew Research Center for the People & the Press found that 80 percent of African Americans say the shooting in the St. Louis suburb of Ferguson raises important issues about race that merit discussion. By contrast, only 37 percent of Whites – less than half the ratio of Blacks – feel that way. In addition, among Whites, 47 percent feel race is getting more attention than it deserves in the Michael Brown case. But only 18 percent of Blacks share that view.

According to the poll, 65 percent of Blacks feel police have gone too far in reacting to Michael Brown’s death and 20 percent feel the response was about right. Again, Whites had a different reaction, with 33 percent saying police had gone too far and a roughly equal proportion, 32 percent saying authorities had acted properly.

The 1996 murder trial of O.J. Simpson exposed this raw divide. A CNN/USA Today Poll showed that 62 percent of African-Americans supported the jury’s decision to acquit the former football star. However, only 20 percent of Whites agreed with the jury. There was a similar split in polls taken during Hank Aaron’s campaign to break Babe Ruth’s all-time home run record and Barry Bond overtaking Aaron.

Even on a supposedly race-neutral issue such as federal aid to victims of Hurricane Katrina, racial views were split. According to a CNN/USA Today poll, six in 10 African Americans said the federal government was slow to rescue residents of New Orleans because many of them were Black. However, only one in eight Whites concurred.

How can we narrow the racial divide when we can’t even agree if there is one?