Remember two months ago, on the anniversary of Occupy Wall Street's insertion into national and popular culture, when all the major media outlets declared Occupy dead?

Those very same media outlets had to swallow those words in the aftermath of Hurricane Sandy, when activists from OWS formed a new group — Occupy Sandy — to help afflicted communities in New York recover from the "superstorm's" devastation. 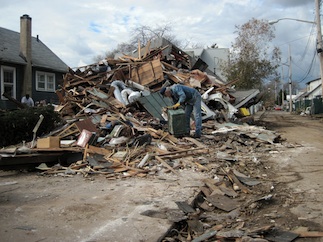 They had to swallow their words again when Occupy Sandy began outperforming organizations whose very job it is to help communities bounce back after disasters. When the Federal Emergency Management Agency shut its doors at the onset of a second storm, a Nor'easter, blowing through New York City, Occupy Sandy picked up their slack.

This became such a big deal that even the New York Times — which historically has not been very kind to movements centered around highlighting economic inequality — could not ignore it:

"Maligned for months for its purported ineffectiveness, Occupy Wall Street has managed through its storm-related efforts not only to renew the impromptu passions of Zuccotti, but also to tap into an unfulfilled desire among the residents of the city to assist in the recovery. This altruistic urge was initially unmet by larger, more established charity groups, which seemed slow to deliver aid and turned away potential volunteers in droves during the early days of the disaster.

"In the past two weeks, Occupy Sandy has set up distribution sites at a pair of Brooklyn churches where hundreds of New Yorkers muster daily to cook hot meals for the afflicted and to sort through a medieval marketplace of donated blankets, clothes and food. There is an Occupy motor pool of borrowed cars and pickup trucks that ferries volunteers to ravaged areas. An Occupy weatherman sits at his computer and issues regular forecasts. Occupy construction teams and medical committees have been formed."

This is not the first time grassroots, activist-based aid groups have outclassed both federal and non-profit disaster relief. Hurricane Katrina saw the formation of the Common Ground Relief Collective. That organization, founded with the principles of horizontal, voluntary association and direct action in mind, began helping people in the Lower Ninth Ward before FEMA or the Red Cross could even set up camp.

These ad hoc groups of activists and volunteers seem to work better than the government or NGOs, but why?

One possible reason is that the activists and volunteers are pulled from the affected communities themselves, rather than coming from without — therefore, they understand the neighborhoods they're working in, know the people and can gauge their needs quickly. However, this is not always the case; Common Ground was started by four out-of-town street medics.

Another possibility is that horizontally organized groups based on the principles of free association and mutual aid are just superior to organizations steeped in bureaucracy. The evidence for this is growing rapidly, as more people take control of their own lives and help their neighbors during times of crisis, economic, ecological or otherwise.