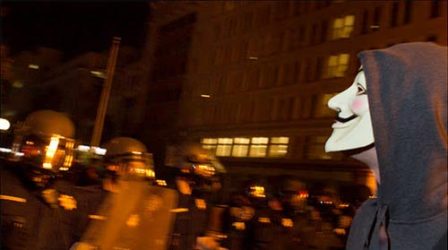 OAKLAND, Calif. -- There is a feeling -- among certain circles of politically conscious and active black people and other people of color not involved in the Occupy Oakland movement, but hovering around its fringes -- that the Oakland protest was mostly made up of people that embody the word occupiers, except they are seen as occupying neighborhoods that were, just a few years ago, almost all black and brown.

They are the prototypical/stereotypical gentrifiers. Young, kinda scruffy looking, with bikes, dogs and weed. Cool though, but odd finding them out during all times of the day and night in West Oakland. The politics behind the movement are undeniable to folks that grew up informed by the Bay Area led movements of the '60s and '70s -- the Black Panthers, Free Speech/Ethnic Studies movements, Gay Rights, etc. We've seen it all and been there done that and don't mind if massive street protests get done again, just not by us.

The Occupy Oakland Facebook site had been lit up weeks prior to the crackdown with posts and threads beefing about the lack of diversity at the camp and in the decision-making processes on site. This kind of racial divisiveness is typical of the East Bay activist, left community and is a decades old struggle. Race and racism are hardly discussed anywhere, let alone inside a revolution.

The feeling among those on the sidelines looking in boiled down to this: There is no way a gathering of more than a few dozen non-white youth -- with tents and grills and signs lambasting capitalism or police brutality or whatever, would have been allowed to set up shop in front of City Hall for this long. Occupiers could get away with it though, for a time.

After a young black man, Oscar Grant III, was shot in the back by a former BART police officer on New Year's Eve 2009, protestors were met on the street by riot police and paddy wagons. Folks involved in the mostly peaceful organized protests, filled with hundreds of young people of color, would not have been allowed to spend the night.

Even before the crackdown came, it wasn't a question of when it would end, but how badly and by what force. Would a crackhead light his pipe up in front of kids? Would a bipolar drunk grab a woman's breast? Would children be maced? Would a rubber bullet take out an old woman's eye? Then the next thought is: Whew, glad none of my people were down there.

Either through its own human waste, internal strife (fueled by race) and crime-filled inertia or the governments iron fisted crackdown, Occupied Oakland at Frank Ogawa Plaza was doomed. After the carnage melancholy creeps in. A chunk of Americans are reported to "agree" with the politics behind the occupy movement. And I imagine there is plenty of sympathy in this city -- ravaged by unemployent, foreclosures and budget cuts -- for a lot of their agenda.

Power to the people, and more power to them, because if somebody is going to take these particular actions -- camping out (basically a sleep-in) and battling police on the street -- it might as well be the Occupiers.

Hundreds of families in Oakland have more intimate concerns that require sustainable forms of fighting injustice. While Occupy Oakland was pitching tents, parents, teachers and concerned communities supporting the handful of schools facing closure because of budget cuts are organizing single mothers, elders raising kids and students to save their schools. Hundreds are expected to attend a school board meeting tonight to fight the closures.

As the night fell on Tuesday protestors and police clashed in and around Frank Ogawa Plaza -- tear gas, shock grenades, mace and batons. No one knows if this is the end or just the beginning of total chaos.