The Man Behind the Mlk Memorial

Brandon I. Brooks Special to the NNPA from the Los Angeles Sentinel
Published: 08 August 2011 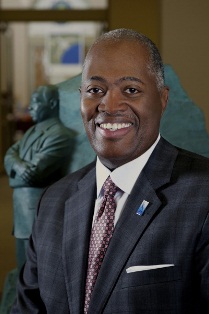 Dr. Martin Luther King, Jr. had a dream for America and we are living it today.  No greater demonstration of this "Dream" is that today we have a Black President in the White House.  We still have a long way to go as far as social justice in this country but make no mistake: America walks with a certain level of consciousness that was influenced by Dr. King's prophetic words and sacrificial life.

The MLK unveiling will mark the 48th anniversary of the March on Washington where Dr. King gave his famous "I Have a Dream" speech.  The event will be televised nationally on networks such as CNN, TV One and B.E.T., and other major networks will cut, in and out, throughout the day.

Harry E. Johnson, Sr., president and CEO of the Martin Luther King, Jr. National Memorial Project Foundation, Inc. has led this historic mission since 2002, and he will lead the unveiling, of what is arguably the most famous and talked about memorial America and the world has ever seen.

"Here we are 48 years after the March on Washington, Dr. King's magnificent words and others, we now dedicate for the first time in our history a memorial to a man of peace, a non-president, and a person of color," said Johnson.

The President of the United States and the U.S. Congress charged the MLK Foundation with the challenge of erecting a memorial on the National Mall in Washington, D.C. to honor the life and legacy of Dr. Martin Luther King, Jr.

Under Johnson's leadership, the MLK Memorial Foundation has raised $112 million of the $120 million needed to complete the memorial.

Alpha Phi Alpha Fraternity played a pivotal role in the idea and origin of Dr. King's legacy being honored through a Washington memorial.  From 2001 to 2004, Johnson served as National President of Alpha Phi Alpha, Incorporated, the fraternity to which Dr. King belonged.  While serving in this position, Johnson oversaw more than 700 chapters located throughout the United States and abroad.

"Alpha Phi Alpha got involved because of five visionaries, Harold Navy, Al Bailey, George Sealy, Oscar Little and Eddie Madison, who sat around a table and thought that people of color were not visiting the mall in great numbers and how do you get them to understand our great history?" said Johnson.  "They obviously said, 'Hey, well what if there were some memorials or statues of people of color then people of color would come'.  And they came up and said for whom should this memorial be, and who would do one?  And they threw all the names, and that they came up with, and ended up with Dr. King's name."

Johnson is a career lawyer and also a Partner at the Law Office of Glenn and Johnson.  He served as City Attorney for Kendelton, Texas, from 1996 - 1999, and taught at Texas Southern University in the Thurgood Marshall School of Law and School of Public Affairs.

Johnson is a small business owner who has dedicated his life and time to community groups, and issues such as voter registration, blood donations, HIV/AIDS, Boy Scouts of America and Big Brothers.  He received his Doctor of Jurisprudence from Texas Southern University where he was a member of the Thurgood Marshall Student Bar Association.  He completed Post Baccalaureate work in Public Administration at St. Louis University and received his Bachelor of Arts degree from Xavier University in Louisiana.

The MLK Memorial Foundation anticipates 4,000,000 will visit, learn and pay tribute to Dr. King and others in the struggle for a better America annually.  This is supposed to be the most-visited memorial in the near future for people to come and visit.

The President of the United States will also be in attendance. "We know that the Secretary of Interior (Ken Salazar) will be there", said Johnson. "Several past icons of the civil rights movement will be there.  We also know that Aretha Franklin will be on program, BeBe Winans, Stevie Wonder, Jamie Foxx, Maya Angelou, Herbie Hancock, Mary Mary, Naturally 7, and a few others.  We are expecting 250,000 people."

"One of the things we want people worldwide, and especially young children in this country, is for them to see that with this memorial on the mall, for the first time in our history, the mall will be diversified," said Johnson.

"Never before has there been a memorial to a person of color of this magnitude.  There may be a statue of Mary McCleod Bethune Cookman somewhere, but there is certainly not anything of this magnitude.  And to say that Dr. King is situated between the Lincoln and the Jefferson memorials, and to their left is the Washington memorial.  It's a great piece of real estate to be associated with."

It's important to note that for a memorial of this magnitude to be built and completed, in just 25 years of conception, is remarkable, and illustrates the dynamic job done by the MLK Memorial Foundation and its leader.

Franklin D. Roosevelt's memorial took 45 years from concept to completion and they had a staff of 44 and a budget of $170 million. With a staff of only 11 people, Johnson is proud to say that the MLK memorial is one of the only memorials to raise funds from private resources.

Many people speculate about what Dr. King might say about the memorial if he were alive today, so the Sentinel asked Johnson to weigh in on the debate, considering he understands King's legacy, as well as any other person in the world.

"Well from what I've been told, Dr. King would want to know what is all the fuss about.  But in my honest opinion, we don't build memorials to men, we build them from ideals of which they have," said Johnson.  "That being said, we built this memorial because of the ideals Dr. King stood for."

Just as the Lincoln or the Jefferson memorial was not built to men, but were built to celebrate the ideals of the men they honor.  The ideals of democracy, or Lincoln's ideals of having this as one country, as opposed to north versus south, is what these memorials celebrate.  Dr. King had the same ideals. That this country was not Black versus White, not rich versus poor, but this is one country, which is the United States of America.  Ultimately, he died because he felt this world should be a world of peace, and he was willing to risk, and give his life for this unprecedented faith.  That we should not have senseless wars, people should not be starving, people deserved to be clothed, so he died for a much greater cause.  And that's why we built this memorial for Dr. King."

"What visitors will encounter when they walk into the memorial site from Independence Avenue is, they will walk into a plaza area that's very open and inviting," said Johnson.  "And then they will walk towards what is called the "Mountain of Despair," a huge bolder of granite that looks like a mountain that has been cut in two."

As you walk through the "Mountain of Despair," you go from the huge open plaza to a narrower 12-foot wide opening between the two mountains.  This will not only signify the struggle going through the civil rights movement, but it will also signify the "Stone of Hope" that was carved out of the "Mountain of Despair."  And so from his speech it says, 'Out of a Mountain of despair, hew a stone of hope.'  So once on the other side of the "Mountain of Despair," there is a 700-foot wall of quotations from Dr. King's speeches on that wall.  But you still haven't seen Dr. King until you walked out towards the water looking at Jefferson, and there on another 30 foot stone, it looks like it was carved directly out of the mountain, there is Dr. King sculpted on the other side, looking at Jefferson."

Johnson talked in depth with the Sentinel about his experience through the rigorous process and how he managed to deal with the memorial project on a day-to-day basis.

"With God on your side, you can make the impossible possible, number 1," shared Johnson. "Number 2, God is not going to put more on you than what you can beareth.  So even though you have some sleepless nights, some restless nights and some headaches, you know that God is going to see you through it, if you are doing the right thing.  So me personally, I thank those that prayed for me, and the foundation and kept a hedge of protection around us so we could get to the end goal.  And so now I am proud to say that I have had a part in this because as I always like to say, you don't ever know where God is going to place, put, or send you. I am thankful He placed put and sent me here."