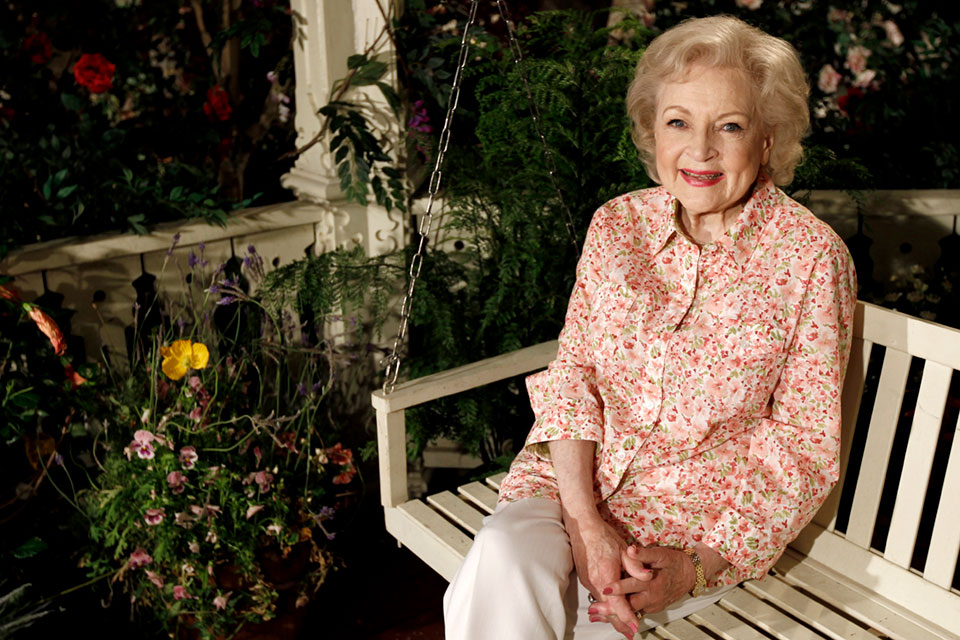 LOS ANGELES (AP) — Betty White, whose saucy, up-for-anything charm made her a television mainstay for more than 60 years, whether as a man-crazy TV hostess on “The Mary Tyler Moore Show” or the loopy housemate on “The Golden Girls,” has died. She was 99.

White's longtime agent and friend Jeff Witjas confirmed her death Friday. She had no diagnosed illness, and it was unclear if she died Thursday night or Friday, he said. 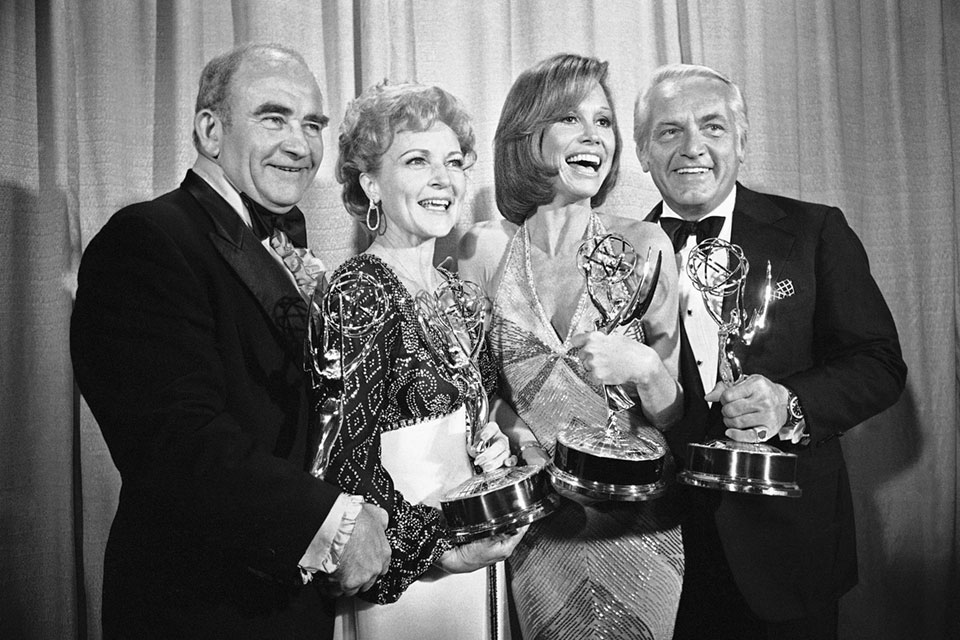 FILE - In this May 18, 1976 file photo, cast members of the "Mary Tyler Moore Show," pose with their Emmys backstage, at the 28th annual Emmy Awards in Los Angeles. From left are, Ed Asner, Betty White, Mary Tyler Moore and Ted Knight. Betty White, whose saucy, up-for-anything charm made her a television mainstay for more than 60 years, has died. She was 99. (AP Photo/Reed Saxon, file)

Her death brought tributes from celebrities and politicians alike.

“We loved Betty White,” first lady Jill Biden said as she left a Delaware restaurant with President Joe Biden, who added: “Ninety-nine years old. As my mother would say, God love her.”

“She was great at defying expectation,” Ryan Reynolds, who starred alongside her in the comedy “The Proposal,” tweeted. “She managed to grow very old and somehow, not old enough. We’ll miss you, Betty.”

White launched her TV career in daytime talk shows when the medium was still in its infancy and endured well into the age of cable and streaming. Her combination of sweetness and edginess gave life to a roster of quirky characters in shows from the sitcom “Life With Elizabeth” in the early 1950s to oddball Rose Nylund in “The Golden Girls” in the ’80s to “Boston Legal,” which ran from 2004 to 2008.

But it was in 2010 that White’s stardom erupted as never before.

In a Snickers commercial that premiered during that year’s Super Bowl telecast, she impersonated an energy-sapped dude getting tackled during a backlot football game.

“Mike, you’re playing like Betty White out there,” jeered one of his chums. White, flat on the ground and covered in mud, fired back, “That’s not what your girlfriend said!”

The instantly-viral video helped spark a successful Facebook campaign to have her host “Saturday Night Live.” The much-watched episode won her a seventh Emmy. 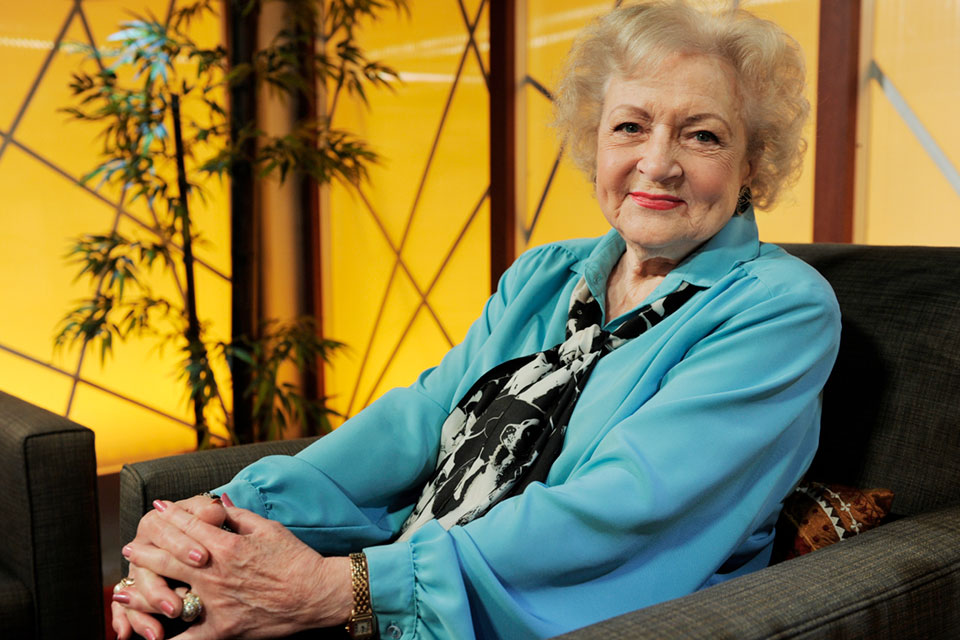 FILE - Actress Betty White poses for a portrait following her appearance on the television talk show "In the House," in Burbank, Calif., Tuesday, Nov. 24, 2009. Betty White, whose saucy, up-for-anything charm made her a television mainstay for more than 60 years, has died. She was 99. (AP Photo/Chris Pizzello, File)

They move into a home being looked after by an elderly Polish widow — a character, played by White, who was meant to appear only in the pilot episode.

But White stole the show, and became a key part of the series, an immediate hit. She was voted the Entertainer of the Year by members of The Associated Press.

“It’s ridiculous,” White said of the honor. “They haven’t caught on to me, and I hope they never do.” 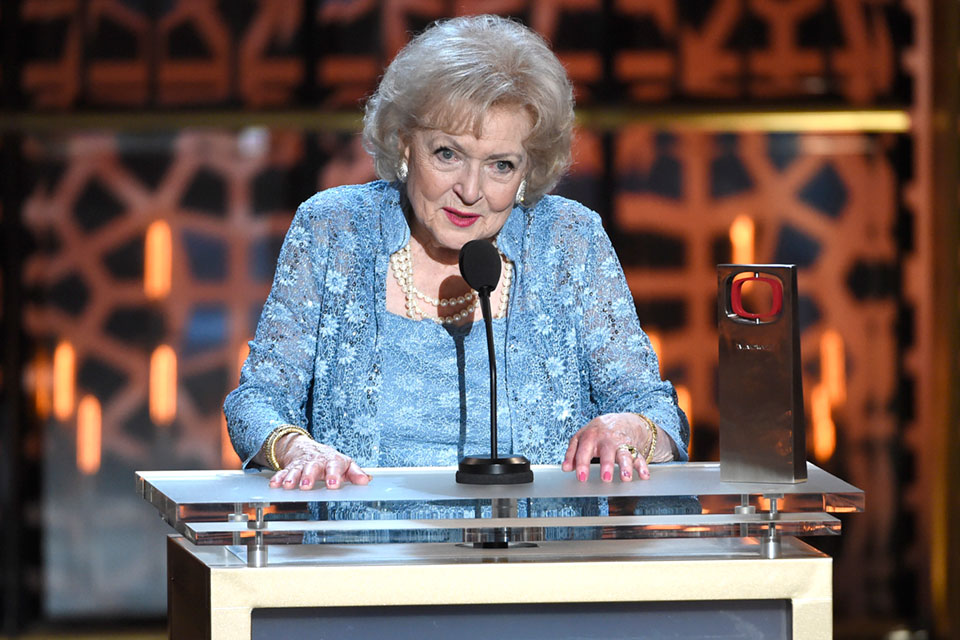 FILE - Betty White accepts the legend award at the TV Land Awards at the Saban Theatre on Saturday, April 11, 2015, in Beverly Hills, Calif. Betty White, whose saucy, up-for-anything charm made her a television mainstay for more than 60 years, has died. She was 99. (Photo by Chris Pizzello/Invision/AP, File)

By then, White had not only become the hippest star around, but also a role model for how to grow old joyously.

The key to a happy life

“Don’t try to be young,” she told the AP. “Just open your mind. Stay interested in stuff. There are so many things I won’t live long enough to find out about, but I’m still curious about them.”

White remained youthful in part through her skill at playing bawdy or naughty while radiating niceness. The horror spoof “Lake Placid” and “The Proposal” were marked by her characters’ surprisingly salty language. And her character Catherine Piper killed a man with a skillet on “Boston Legal.”

Her role as “Happy Homemaker” Sue Anne Nivens in “The Mary Tyler Moore Show," which was already a huge hit, was planned as a one-off appearance in 1973, but it would last until the show ended in 1977.

“While she’s icky-sweet on her cooking show, Sue is really a piranha type,” White once said. The role brought her two Emmys as supporting actress in a comedy series. 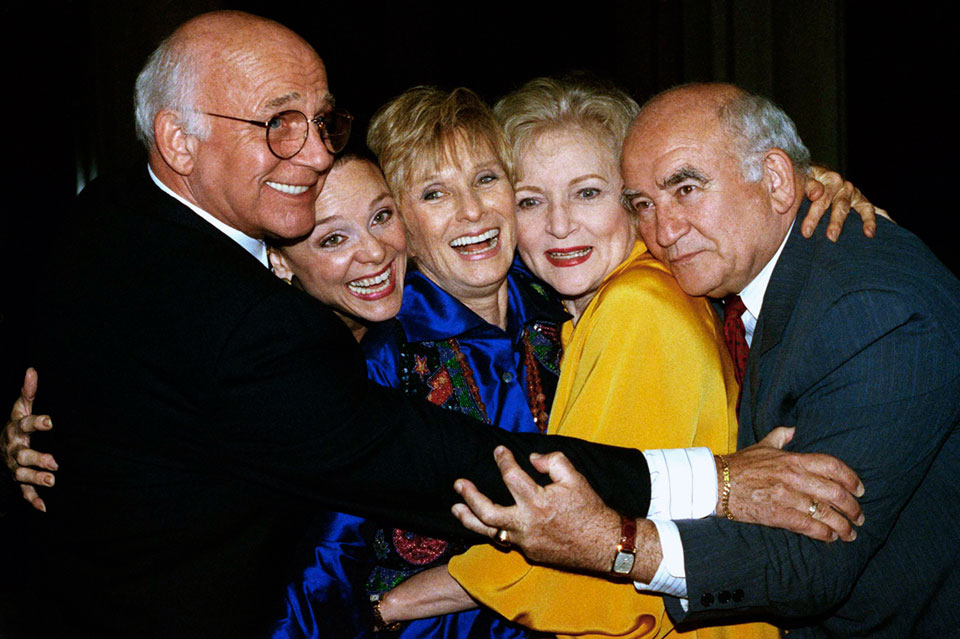 FILE - Former cast members of the Mary Tyler Moore Show, sans Mary Tyler Moore, are reunited for the Museum of Television and Radio's 9th annual Television Festival in Los Angeles on March 21, 1992. From left are Gavin MacLeod, Valerie Harper, Cloris Leachman, Betty White and Ed Asner. Betty White, whose saucy, up-for-anything charm made her a television mainstay for more than 60 years, has died. She was 99. (AP Photo/Craig Fujii, File)

In 1985, White starred on NBC with Bea Arthur, Rue McClanahan and Estelle Getty in “The Golden Girls.” Its cast of mature actors, playing single women in Miami retirement, presented a gamble in a youth-conscious industry. But it proved a solid hit and lasted until 1992.

The role won her yet another Emmy, and she reprised it in a short-lived spinoff, “The Golden Palace.” 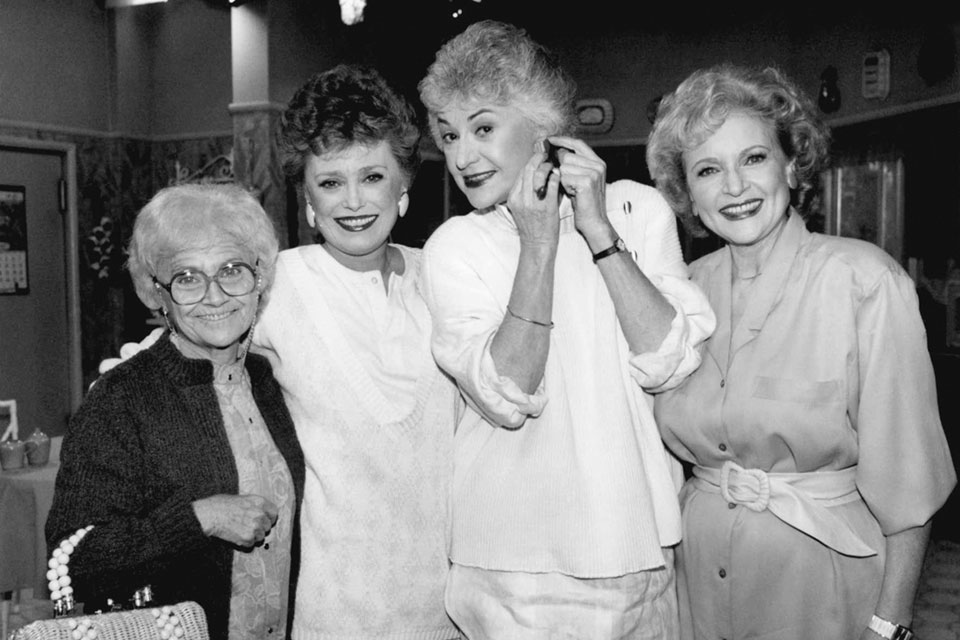 FILE - Actors from the television series "The " Golden Girls" stand together during a break in taping Dec. 25, 1985 in Hollywood. From left are, Estelle Getty, Rue McClanahan, Bea Arthur and Betty White. Betty White, whose saucy, up-for-anything charm made her a television mainstay for more than 60 years, has died. She was 99. (AP Photo/Nick Ut, File)

White began her television career as $50-a-week sidekick to local Los Angeles TV personality Al Jarvis in 1949. White proved to be a natural for the new medium.

A sketch she had done with Jarvis turned into a syndicated series, “Life With Elizabeth,” which won her first Emmy.

Off-screen, White tirelessly raised money for animal causes, hosting a syndicated TV show and writing three books on her animal love, which she said stemmed from her family taking care of as many as 15 dogs at a time during the Depression.

“No,” White told the AP. “Anything with a leg on each corner.”

Then what about snakes?

She was born Betty Marion White in Oak Park, Illinois, and the family moved to Los Angeles when she was a toddler.

“I’m an only child, and I had a mother and dad who never drew a straight line: They just thought funny,” she told The Associated Press in 2015. “We’d sit around the breakfast table and then we’d start kicking it around.”

Her early ambition was to be a writer, and she wrote her grammar school graduation play, giving herself the leading role.

At Beverly Hills High School, her ambition turned to acting, and she appeared in several school plays. Her parents hoped she’d go to college, but instead she took roles in a small theater and played bit parts in radio dramas.

After two very brief marriages in the 1940s, White wed her third and final husband, actor and game show host Allen Ludden, in 1963. They remained married until his death in 1981.

When asked in 2011 how she had managed to be universally beloved during her decades-spanning career, she summed up with a dimpled smile:

“I just make it my business to get along with people so I can have fun. It’s that simple.”