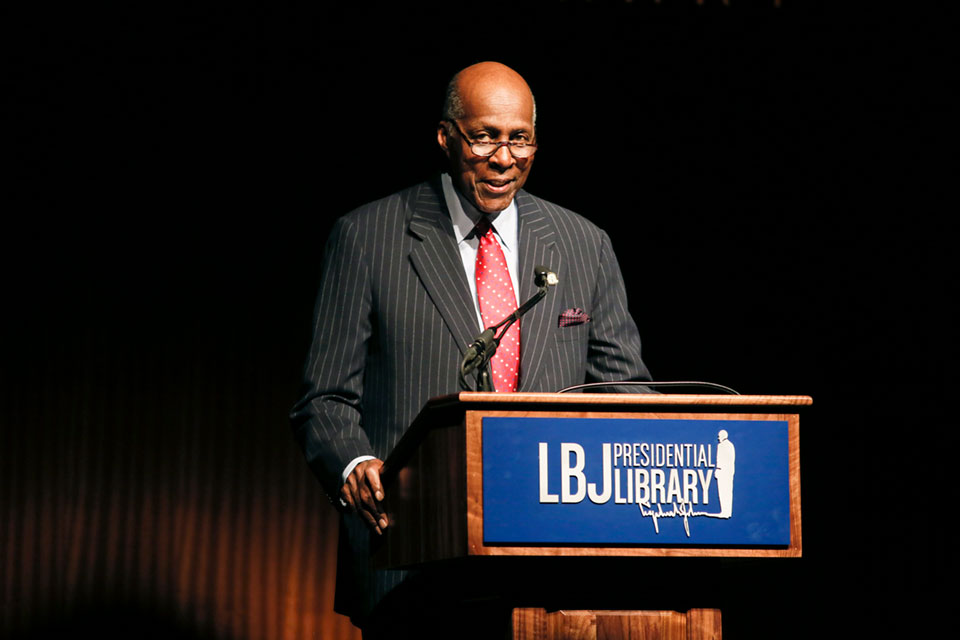 ATLANTA (AP) — Vernon Jordan, who rose from humble beginnings in the segregated South to become a champion of civil rights before reinventing himself as a Washington insider and corporate influencer, has died, according to a statement from his daughter. He was 85.

“It it is with sadness that we confirm that Vernon E. Jordan passed away peacefully last night," his niece, Ann Walker Marchant, said Tuesday in an email to The Associated Press. 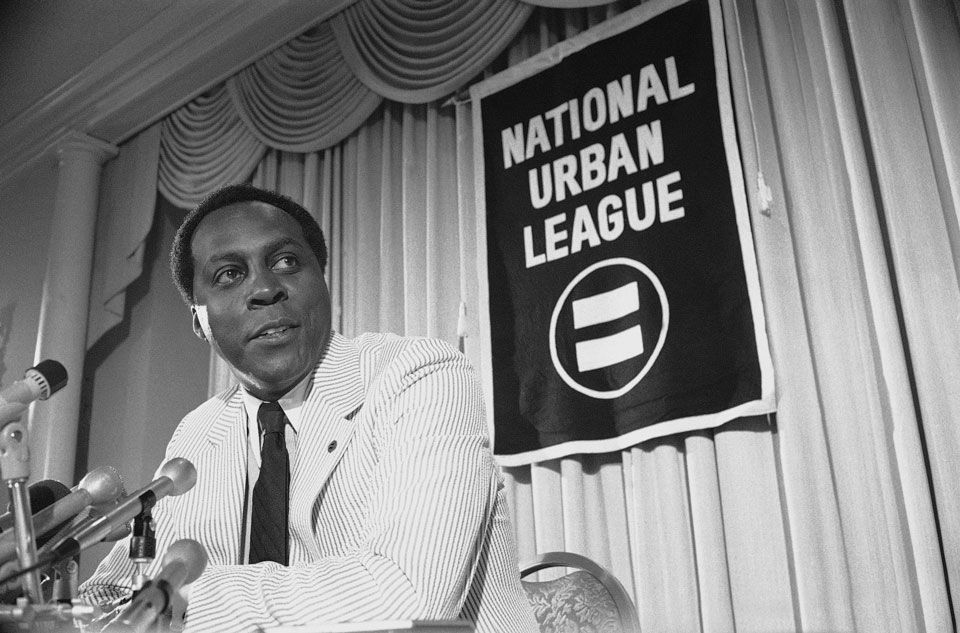 In this July 27, 1977 file photo, Vernon Jordan, President of the National Urban League, talks to reporters during a press conference in Washington. (AP Photo/File)After stints as field secretary for the Georgia NAACP and executive director of the United Negro College Fund, he became head of the National Urban League, becoming the face of Black America’s modern struggle for jobs and justice for more than a decade. He was nearly killed by a racist’s bullet in 1980 before transitioning to business and politics.

His friendship with Bill Clinton took them both to the White House. Jordan was an unofficial aide to Clinton in his presidency, drawing him into controversy during the Monica Lewinsky scandal.

Jordan “never gave up on his friends or his country," Clinton said Tuesday. 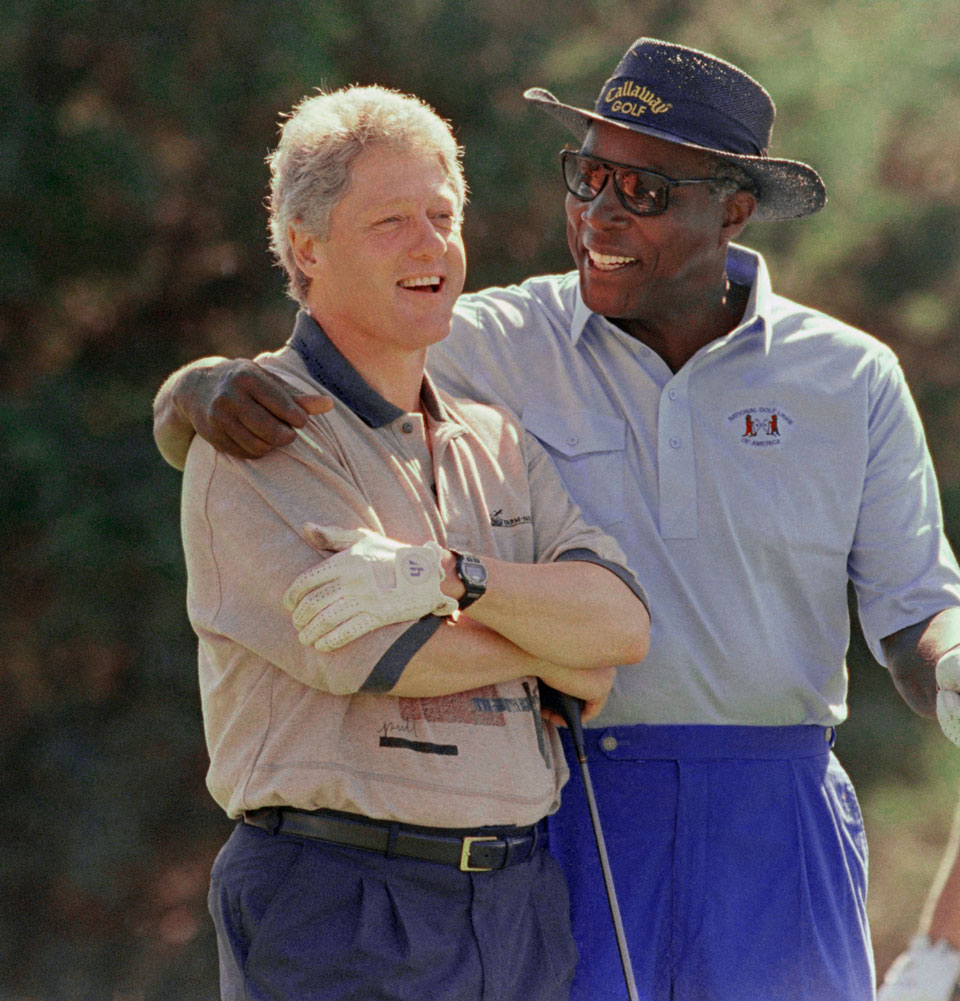 In this Aug. 22, 1993 file photo, President Bill Clinton is consoled by White House adviser and golf partner Vernon Jordan after Clinton hit a bad shot during their golf match at the Farm Neck Golf Club in Oak Bluffs, Mass., on Martha's Vineyard. (AP Photo/Marcy Nighswander, File)“From his instrumental role in desegregating the University of Georgia in 1961, to his work with the NAACP, the Southern Regional Council, the Voter Education Project, the United Negro College Fund, and the National Urban League, to his successful career in law and business, Vernon Jordan brought his big brain and strong heart to everything and everybody he touched. And he made them better," Clinton and his wife Hillary said in a statement.

Former President Barack Obama said that “like so many others, Michelle and I benefited from Vernon Jordan’s wise counsel and warm friendship — and deeply admired his tireless fight for civil rights."

After growing up in the Jim Crow South and living much of his life in a segregated America, Jordan took a strategic view of race issues.

“My view on all this business about race is never to get angry, no, but to get even,” Jordan said in a New York Times interview in 2000.

Jordan was the first lawyer to head the Urban League, which had traditionally been led by social workers. Under Jordan’s leadership, the Urban League added 17 more chapters and its budget swelled to more than $100 million. The organization also broadened its focus to include voter registration drives and conflict resolution between Blacks and law enforcement.

He resigned from the Urban League in 1982 to become a partner at Akin, Gump, Strauss, Hauer and Feld.

Jordan was a key campaign adviser to Clinton during his first presidential campaign and co-chaired Clinton’s transition team. He was the first Black to be assigned such a role.

Speaker of the House Nancy Pelosi said Tuesday on Twitter that “Jordan's leadership took our nation closer to its Founding promise: all are created equal." 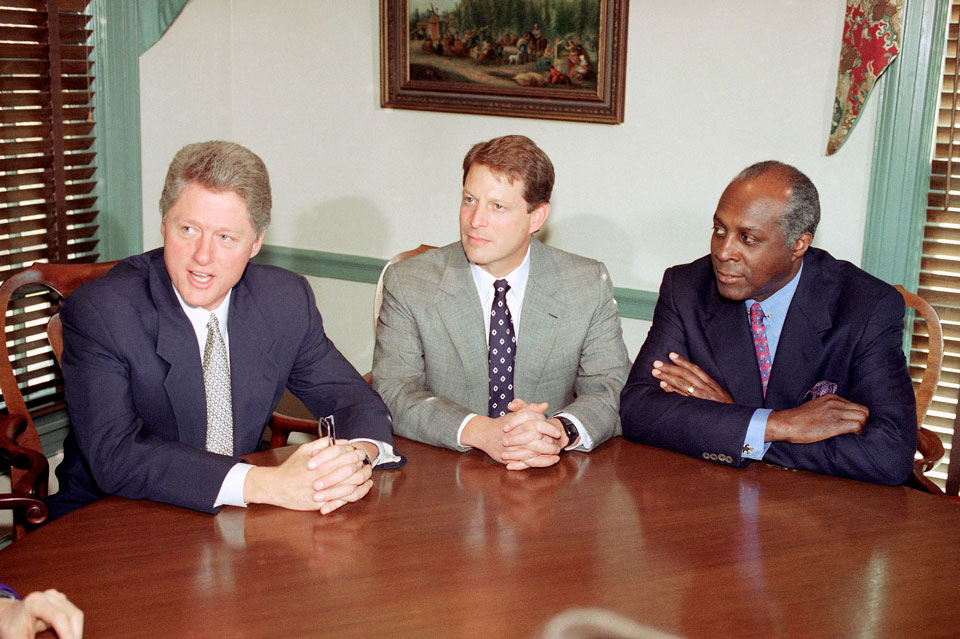 In this Nov. 18, 1993 file photo, President-Elect Bill Clinton, left, meets with Vice President-elect Al Gore, center, and Vernon Jordan at the Governor's Mansion in Little Rock, Ark. (AP Photo/Greg Gibson, File)His friendship with Clinton, which began in the 1970s, evolved into a partnership and political alliance. He met Clinton as a young politician in Arkansas, and the two connected over their Southern roots and poor upbringings.

Although Jordan held no official role in the Clinton White House, he was highly influential and had such labels as the “first friend.” He approached Colin Powell about becoming Secretary of State and encouraged Clinton to approve the NAFTA agreement in 1993. Jordan also secured a job at Revlon for Monica Lewinsky, a White House intern whose sexual encounters with the president spawned a scandal.

Jordan’s actions briefly drew the attention of federal prosecutors investigating Clinton’s actions, but he ultimately was not mentioned in a final report issued by special prosecutor Ken Starr.

Vernon Eulion Jordan Jr., was born in Atlanta on Aug. 15, 1935, the second of Vernon and Mary Belle Jordan’s three sons. Until Jordan was 13, the family lived in public housing. But he was exposed to Atlanta’s elite through his mother, who worked as a caterer for many of the city’s affluent citizens. 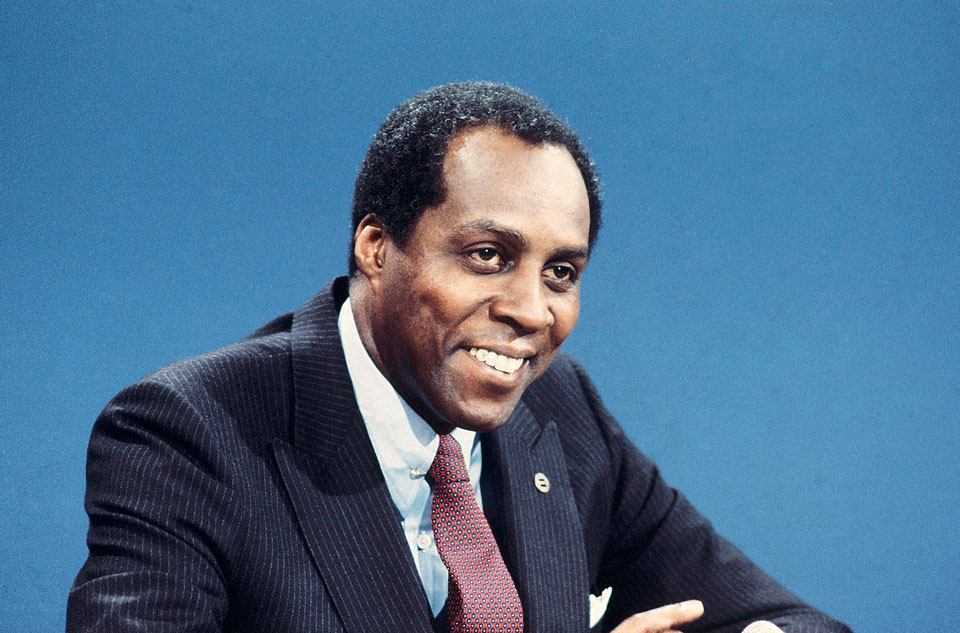 In this Nov. 30, 1980 file photo, Vernon Jordan, of Urban League, appears on CBS-TV's "Face the Nation." (AP Photo/Barry Thumma, File)Jordan went to DePauw University in Indiana, where he was the only Black student in his class and one of five at the college. Distinguishing himself through academics, oratory and athletics, he graduated in 1957 with a bachelor’s degree in political science and went on to attend Howard University School of Law in Washington. While there, he married his first wife, Shirley Yarbrough.

The young couple moved to Atlanta after Jordan earned his law degree in 1960, and Jordan became a clerk for civil rights attorney Donald Hollowell, who successfully represented two Black students — Hamilton Holmes and Charlayne Hunter — attempting to integrate the University of Georgia. In an iconic photograph, Jordan — an imposing 6 feet, 4 inches — is seen holding at bay the white mob that tried to block Hunter from starting her first day of classes.

In 1961, Jordan became Georgia field secretary for the National Association for the Advancement of Colored People. During his two years in the role, Jordan built new chapters, coordinated demonstrations and boycotted businesses that would not employ Blacks.

Mourning the passage of my friend, the extraordinary Vernon Jordan. He battled the demons of voter suppression and racial degradation, winning more than he lost. He brought others w/him. And left a map so more could find their way. Love to his family. Travel on with God’s grace.

“He brought others with him. And left a map so more could find their way," Abrams said on Twitter. “Love to his family. Travel on with God’s grace.”

Jordan moved to Arkansas in 1964 and went into private practice. He also became director of the Voter Education Project of the Southern Regional Council. During his tenure, millions of new Blacks joined the voter rolls and hundreds of Blacks were elected in the South. 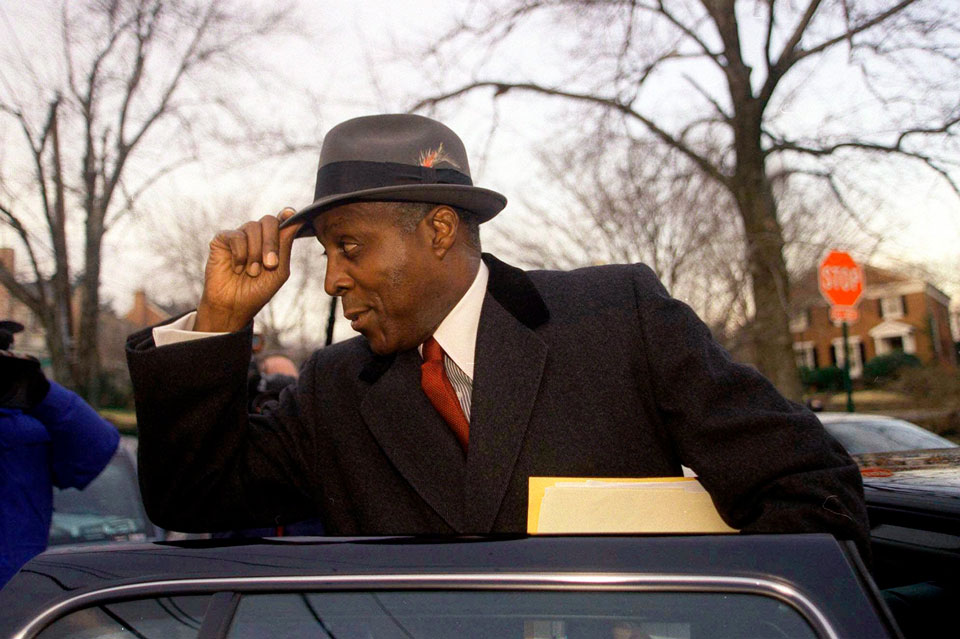 In This Jan. 27, 1998 file photo, Vernon Jordan, long-time confidant of President Clinton, leaves his home in Washington. (AP Photo/Khue Bui, File)Jordan considered running for Georgia’s fifth congressional district seat in 1970, but was tapped that year to head the United Negro College Fund. Holding the position for just 12 months, Jordan used his fundraising skills to fill the organization’s coffers with $10 million to help students at historically Black colleges and universities.

In 1971, after the death of Whitney Young Jr., Jordan was named the fifth president of the National Urban League, which is dedicated to empowering African Americans to enter the economic and social mainstream.

“I believe that working with the Urban League, the NAACP, PUSH and SCLC is the highest form of service that you can perform for Black people,” Jordan said in a December 1980 interview in Ebony Magazine. “And if you serve Black people you serve the country as well. So if I do a good job here, the Black people are not the only beneficiary; so is the country.

"The country has a vested interest in Black people doing well.”

The high-profile position landed him in the crosshairs of a racist in May 1980 in Fort Wayne, Indiana. Jordan was shot with a hunter’s rifle outside his hotel after returning from dinner following a speaking engagement.

Jordan had five surgeries and was visited by President Jimmy Carter during his 3-month recovery in the hospital.

“I’m not afraid and I won’t quit,” Jordan told Ebony after the shooting.

Joseph Paul Franklin, an avowed white supremacist who targeted Blacks and Jews in a cross-country killing spree from 1977 to 1980, later admitted to shooting Jordan. He was never prosecuted in Jordan’s case, but was put to death in 2013 for another slaying in Missouri.

Jordan left the organization in 1981, but said his departure was not related to the shooting.

In 2000, Jordan joined the New York investment firm of Lazard Freres & Co. as a senior managing partner. The following year, he released an autobiography, “Vernon Can Read!: A Memoir.” Also in 2001, Jordan was awarded the Spingarn Medal, the highest honor given to a Black American for outstanding achievement.

He has received more than 55 honorary degrees, including ones from both of his alma maters and sat on several boards of directors.

“He became the model for boards of directors; sitting on countless boards," The Rev. Jesse Jackson Sr. said Tuesday on Twitter. “He became a renowned international lawyer. I miss him so much already."