Slice Up Nigeria to Save It, Libyan Leader Says 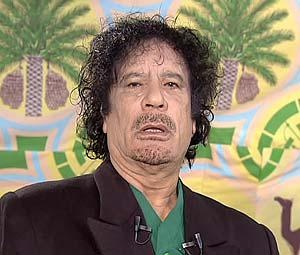 (GIN) – Speaking to a group of African student leaders in Tripoli, Libyan leader Muammar Gaddafi said nothing would stop ethnic violence in Nigeria except splitting the oil-rich nation into Muslim and Christian states.
The violence in Nigeria is a "deep-rooted conflict of a religious nature" that requires a radical solution, he said.
He said Nigeria's leaders must consider creating a state for Muslims and another for Christians, splitting the country along the model of the 1947 India-Pakistan partition, which he said put an end to violence between Muslims and Hindus there.
Nigeria, a nation of 150-million people, is almost evenly split between Sunni Muslims in the north and the predominantly Christian south. The recent bloodshed has been happening in central Nigeria, where dozens of ethnic groups vie for control of the nation's fertile centre.