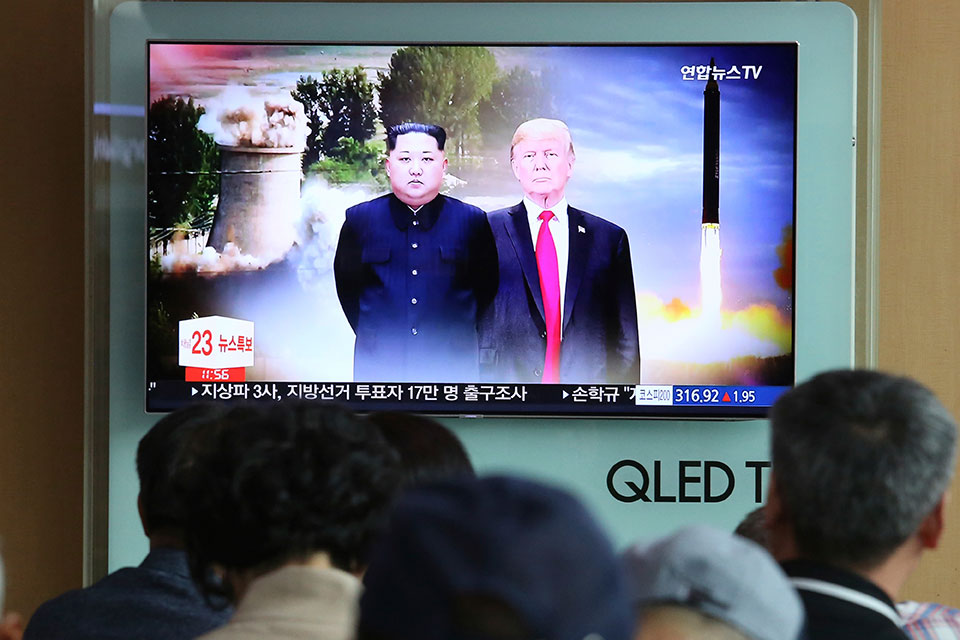 SINGAPORE (AP) — In their final hours of calm, President Donald Trump and North Korea's Kim Jong Un huddled with advisers in luxury Singapore hotels less than half a mile apart, readying for a nuclear summit that could define the fate of millions, and their own political futures.

Both sides spent Monday finalizing preparations for the unprecedented summit, which was to kick off at 9 a.m. Tuesday with a handshake between Trump and Kim, an image sure to be devoured around the world. Trump and Kim planned to meet one on one, joined only by translators, for up to two hours before admitting their respective advisers, a U.S. official said. The official was not authorized to speak publicly about internal deliberations and insisted on anonymity.

The summit will be the first between a North Korean leader and a sitting American president. In Singapore, the island city-state playing host to the summit, the sense of anticipation was palpable, with people lining spotless streets Monday waving cell phones as Trump headed to meet with Singapore's prime minister.

U.S. and North Korean officials negotiated at the Ritz Carlton Monday ahead of the sit-down aimed at resolving a standoff over Pyongyang's nuclear arsenal.

Trump tweeted Monday morning: "Great to be in Singapore, excitement in the air!"

Trump and Kim arrived in Singapore on Sunday, both staying at luxurious and heavily guarded hotels, with Trump at the Shangri-La Hotel and Kim at the St. Regis Hotel.

Trump and Singapore Prime Minister Lee Hsien Loong were meeting over lunch on Monday. Kim and Lee met the day before.

"The entire world is watching the historic summit between (North Korea) and the United States of America," Kim told Lee through an interpreter.

Top Aides Prepare for the Summit

Secretary of State Mike Pompeo, the former CIA director, spent the morning huddled with top aides preparing for the summit, aides said. He was joined in Singapore by Ambassador Sung Kim, the U.S. envoy to the Philippines; and Ambassador Michael McKinley, a career diplomat Pompeo recently tapped to be his senior adviser.

Pompeo traveled twice to Pyongyang in recent months to lay the groundwork for Trump's meeting, becoming the most senior member of Trump's team to spend time with Kim face to face. Illustrating the divisions within Trump's administration about the wisdom of pursuing diplomacy with the North, Pompeo has been a driving force behind the meeting as national security adviser John Bolton has become a more behind the scenes player.

Expectations for the Summit

Trump has said he hopes to make a legacy-defining deal for the North to give up its nuclear weapons, though he has recently sought to minimize expectations, saying more than one meeting may be necessary. The North has faced crippling diplomatic and economic sanctions as it has advanced development of its nuclear and ballistic missile programs.

Experts believe the North is on the brink of being able to target the entire U.S. mainland with its nuclear-armed missiles, and while there's deep skepticism that Kim will quickly give up those hard-won nukes, there's also some hope that diplomacy can replace the animosity between the U.S. and the North.

As Trump was trying to build a bridge with Kim, he was smashing longtime alliances with Western allies, withdrawing from the G-7 joint communique, escalating a trade fight and launching blistering criticism against Canadian Prime Minister Justin Trudeau.

Trump continued to tweet angrily at Trudeau from Singapore, saying Monday "Fair Trade is now to be called Fool Trade if it is not Reciprocal." Again accusing the longtime U.S. ally of unfair trade practices, he added: "Then Justin acts hurt when called out!"

One top Trump adviser cast the move as a show of strength before the Kim meeting. Economic adviser Larry Kudlow told CBS News in Washington that "Kim must not see American weakness," adding that by criticizing new tariffs, Trudeau was "pouring collateral damage on this whole Korean trip."

Trump declared he felt "very good" going into the unprecedented meeting, as he arrived in Singapore Sunday night. He traveled to the Asian island nation from a combative meeting of the Group of Seven nations, spending the flight consulting with Pompeo and Bolton, reviewing briefing materials and preparing.

The president has sought to tamp down expectations for the summit, which had grown to include Nobel Peace Prize chatter. Asked Saturday about his goals, he said: "Well, I think the minimum would be relationship. You would start at least a dialogue, because, you know, as a deal person, I have done very well with deals."

While advisers insist Trump has been reviewing briefing materials, he continues to insist that his gut instincts will matter most when he gets in the room with Kim. He told reporters he thinks he will know almost immediately whether a deal can be made, saying: "I will know, just my touch, my feel. That's what I do. How long will it take to figure out whether or not they are serious? I said maybe in the first minute."

Pyongyang has said it is willing to deal away its entire nuclear arsenal if the United States provides it with reliable security assurances and other benefits. But there are major doubts, given how hard it has been for Kim to build his program and given that the weapons are seen as the major guarantee to his holding onto unchecked power.

Any nuclear deal will hinge on the North's willingness to allow unfettered outside inspections of the country's warheads and nuclear fuel, much of which is likely kept in a vast complex of underground facilities. Past nuclear deals have crumbled over North Korea's reluctance to open its doors to outsiders.

Another possibility from the summit is a deal to end the Korean War, which North Korea has long demanded, presumably, in part, to get U.S. troops off the Korean Peninsula and eventually pave the way for a North Korean-led unified Korea.

Trump has also raised the possibility of further summits and an agreement ending the Korean War by replacing the armistice signed in 1953 with a peace treaty. China and South Korea would have to sign off on any legal treaty.