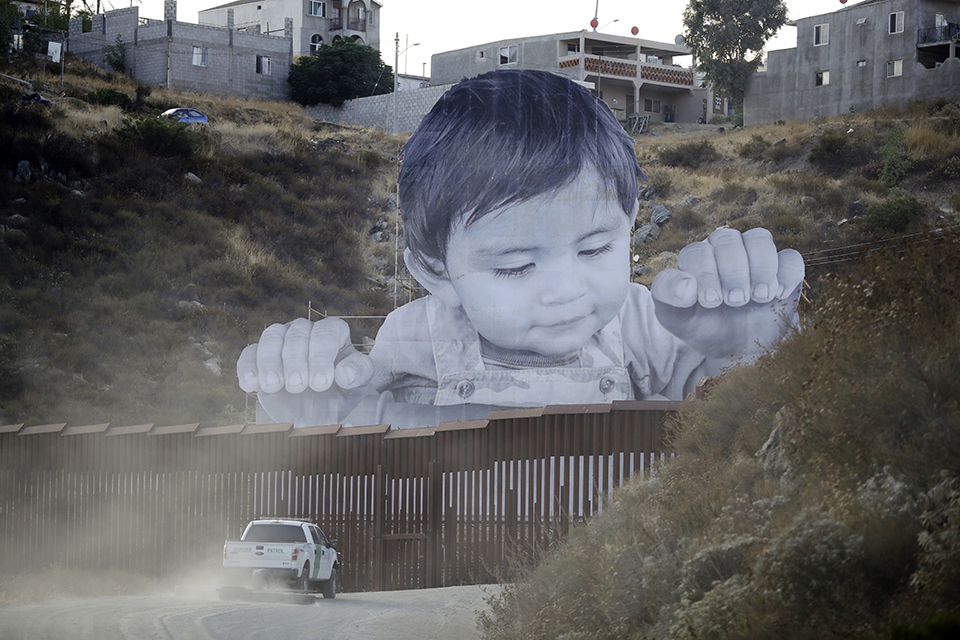 With a sharp departure from years and sometimes decades of U.S. foreign policy, President Donald Trump has made a seismic global impact during his first year in office.

It has been delivered with his own brand of bombast and occasional threats.

Contentious issues have always existed, especially in conflict-ridden or volatile countries, but has he improved or worsened matters? Twelve months into his presidency, Associated Press correspondents take stock:

Trump repeatedly declared in his campaign that he would improve relations with Russia but was never specific. A year into his presidency, it's no clearer. Moscow and Washington are at odds over issues ranging from North Korea to Ukraine, despite Trump's open admiration of President Vladimir Putin.

Russian officials had high hopes that Trump would move to abandon or reduce the sanctions that the United States imposed over Russia's annexation of Crimea and its support for separatists in eastern Ukraine.

Instead, Trump approved selling lethal weapons to Ukraine for the fight against the rebels, he appointed a Russia hawk as Washington's envoy for Ukraine's peace process, and his U.N. ambassador, Nikki Haley, declared that the Crimea sanctions wouldn't be lifted unless the peninsula is returned to Ukraine.

Trump even signed legislation imposing new sanctions on Russia — unwillingly, but effectively forced to by the measure's near-unanimous Senate approval. Publicly, the Kremlin contends Trump is hogtied by suspicions of Russia held over from the Barack Obama era and by hysteria over allegations that Moscow meddled in the 2016 election and that Trump and Russia had colluded.

Trump himself has criticized Russia, saying Moscow "seeks to challenge American values, influence and wealth," and complaining he is not satisfied with Russia's role in easing tensions over North Korea's nuclear and missile programs.

Although Trump has a taste for defying conventional political wisdom, his potential moves toward Russia appear constricted until the investigation into his campaign's dealings with Russia concludes and leaves him untarnished. While the probe continues, the Kremlin is edging from quiet disappointment into needling suggestions of U.S. weakness.

"Will they show good will? Will they gather courage, exercise common sense?" Putin said.

Asia was one of Trump's punching bags during his election campaign. Chinese and Japanese exports were destroying U.S. jobs. South Korea and Japan weren't paying enough for U.S. troops defending their countries.

Two weeks before Trump took office, the leader of North Korea declared in a New Year's address that preparations for an intercontinental ballistic missile were in "the final stage." Trump tweeted in response: "North Korea just stated that it is in the final stages of developing a nuclear weapon capable of reaching parts of the U.S. It won't happen!"

Both sides traded threats and insults, and North Korea conducted an underground nuclear test and three ICBM launches that demonstrated at least a theoretical ability to reach the U.S.

Seeking China's help on isolating North Korea through economic sanctions, Trump backed off a threat to label China a currency manipulator. He was off-and-on conciliatory on trade during an extended visit to Asia in November, and China said it would lift restrictions on foreign investment in its banks and other financial institutions.

As his second year in office dawns, however, Trump appears to be moving steadily toward raising tariffs or restricting imports to try to force China to take steps to narrow its trade surplus with the United States.

Kim began the year with his own conciliatory note: sending a delegation to next month's Winter Olympics in South Korea. But he also said in a Jan. 1 speech that North Korea's nuclear and missile tests have achieved a powerful deterrent that "nothing can reverse."

SYRIA, IRAQ AND THE ISLAMIC STATE

Trump can claim credit for the virtual defeat of the Islamic State group in Iraq and Syria on his watch. He largely continued Obama's anti-IS strategy and intensified it. U.S. troop levels were increased in both countries, coalition commanders got more authority to call airstrikes and operations focused on killing more militants rather than allowing their escape, according to Defense Secretary Jim Mattis.

The biggest victory was retaking the Iraqi city of Mosul, launched under Obama. Iraqi forces later retook nearly all the territory held by IS and the government declared victory over the group in December.

In Syria, Kurdish forces with stepped-up backing from U.S. forces retook the de facto IS capital of Raqqa. Since then, they and Syrian forces have been pushing IS out of most of its remaining territory.

In dealing with Syria's civil war, Trump made it clear his fight was not against President Bashar Assad, who has presided over killings on a massive scale in order to retain power. Trump has largely continued Obama's mostly hands-off policy, effectively allowing Russia to take the reins militarily and politically, along with Iran, both Assad allies.

Trump halted a covert CIA program to arm and train moderate rebels fighting Assad. The U.S. has not played any role in the political effort to end the war and is conspicuously absent from U.N.-led talks. Russia has taken the lead, brokering agreements with Turkey and Iran and spearheading a separate political track that has led to four de-escalation zones meant in theory to reduce violence.

In April, the U.S. struck a Syrian air base after a chemical weapons attack that killed dozens of civilians that the U.S. blamed on Assad. It marked the first deliberate U.S. military action against Assad's forces, but it was not followed up by any other action and was largely seen as muscle flexing rather than part of a coherent policy.

The Trump administration has not spelled out post-IS policies for Iraq and Syria. It said it won't finance a program to rebuild the destruction from the Iraq war. It also hasn't made clear how it sees the future of those parts of eastern and northern Syria held by the Kurds.

Turkish President Recep Tayyip Erdogan has denounced U.S. plans to form a 30,000-member Kurdish-led border security force in Syria, vowing to "drown this terror force before it is born."

Trump promised to pursue "the ultimate deal" — an agreement to end the Israeli-Palestinian conflict. A year later, he has made little headway and his hoped-for peace push appears to be in tatters.

In December, he upended decades of policy by recognizing Jerusalem as Israel's capital. The move, seen as siding with Israel, set off weeks of unrest and prompted the Palestinians to declare Trump unfit to mediate peace.

Trump earlier distanced himself from the two-state solution favored by the global community, saying he would support it only if both sides agreed, effectively giving Israel veto power.

The U.S. has said little about Israeli settlement construction, stayed silent over a Likud Party vote in favor of annexing parts of the West Bank and blamed the Palestinians for the impasse in peace efforts.

This week, the Trump administration cut $65 million in money for Palestinian refugees, saying the U.N. agency responsible for the programs must undertake a "fundamental re-examination."

While Israeli leader Benjamin Netanyahu is one of Trump's biggest supporters, the Palestinians have virtually cut off ties and are trying to rally opposition to U.S. efforts.

Palestinian frustrations boiled over in a belligerent speech by Palestinian President Mahmoud Abbas that ridiculed Trump and some of his closest advisers. Abbas pre-emptively rejected any peace plan Trump offers.

The U.S. peace team, led by Trump son-in-law Jared Kushner, has yet to offer a proposal.

Trump and his tough talk on Iran were exactly what Saudi Arabia wanted to hear.

Mohammed bin Salman, King Salman's assertive young son, traveled to the U.S. to meet with Trump's administration and became close to Kushner. Mohammed bin Salman was later elevated to crown prince, putting him next in line to the throne.

Trump's first foreign trip as president was to Riyadh for a summit of more than 50 Arab and Muslim leaders. Saudi Arabia later joined three other Arab nations in boycotting Qatar, home to a U.S. military base. While American officials have tried to defuse the crisis, Trump offered comments seeming to back the boycotters.

Iran's leaders have mocked and criticized Trump, whose refusal to re-certify the Iran nuclear deal has put the accord in question. Some analysts have suggested Trump's refusals could doom the deal, which saw Iran limit its enrichment of uranium in exchange for the lifting of economic sanctions allowing it to sell oil again on the world market.

Average Iranians also are angry at Trump for slights such as his travel bans. Yet he voiced support for protests in Iran at the end of the year, unlike Obama's caution toward demonstrations in 2009 over its disputed presidential election.

Trump had made clear in his campaign that relations with Mexico — the neighbor he characterized as a source of drugs and rapists and a thief of jobs — would change. Trump has continued in that vein, saying as recently as this month that Mexico would pay for the border wall — just a day after asking Congress for $18 billion to build it.

His hardball renegotiation of the North American Trade Agreement has kept the Mexican peso dancing for months as he and his team regularly threaten to walk away if Mexico and Canada don't submit to significant changes. He ended the Obama-era program that allowed young immigrants brought to the U.S. illegally to stay and work — a decision recently suspended by a federal judge. His aggressive pursuit of immigrants had several Latin American countries preparing for a flood of deportees that has yet to arrive.

The ride has not been smoother in Central America or the Caribbean. Trump ended the temporary protective status of residents who fled natural disasters in El Salvador, Nicaragua and Haiti. A decision on Honduras, a key U.S. ally in the drug war, was delayed. Shortly after Honduras voted against a U.N. resolution condemning Trump's decision to move the U.S. Embassy in Israel to Jerusalem, the Trump administration congratulated Honduran President Juan Orlando Hernandez on his disputed re-election victory.

But Haiti received the region's final broadside in Trump's first year. Last week, Trump questioned why the U.S. was admitting immigrants from the island battered by earthquakes and hurricanes, as well as others from unspecified "shithole" African nations, during an immigration meeting with lawmakers. He later said he didn't say anything derogatory about the Caribbean country.

Trump's approach to Africa has been one largely of neglect — and that insult.

Concerns emerged about the administration's proposed cuts to foreign aid and the shift from humanitarian assistance in Africa to one of counterterror operations. The approach was seen in Somalia, where the first U.S. ambassador to the chaotic Horn of Africa nation in 25 years raised eyebrows by handing its new president a hat emblazoned with the words "Make Somalia Great Again."

An increase in U.S. drone strikes followed as Trump expanded military operations against the Somalia-based extremist group al-Shabab. Some humanitarian workers were appalled, with the country on the brink of a famine.

But it was the deaths of U.S. military service members in Africa that turned Americans' attention to the continent. For the first time since 1993, a U.S. military member died in combat in Somalia. And in October, the killing of four U.S. soldiers in the West African nation of Niger raised questions about why the U.S. military was there at all.

As key ambassador posts in South Africa, Egypt, Congo and elsewhere stayed vacant, Trump's rare mentions of Africa signaled a lack of interest or outright ignorance. He referred to a country called "Nambia," which doesn't exist. He reportedly mocked Nigeria, one of Africa's largest economies, by saying its people wouldn't return to their "huts" once they saw the U.S.

And there was anger and astonishment over Trump's vulgar reference to African countries. As calls for apologies or boycotts followed, the relatively placid southern African nation of Botswana summoned the U.S. ambassador to clarify whether it, too, was held in such regard.

Many Africans expressed concern that Trump might drag America's reputation down with him.