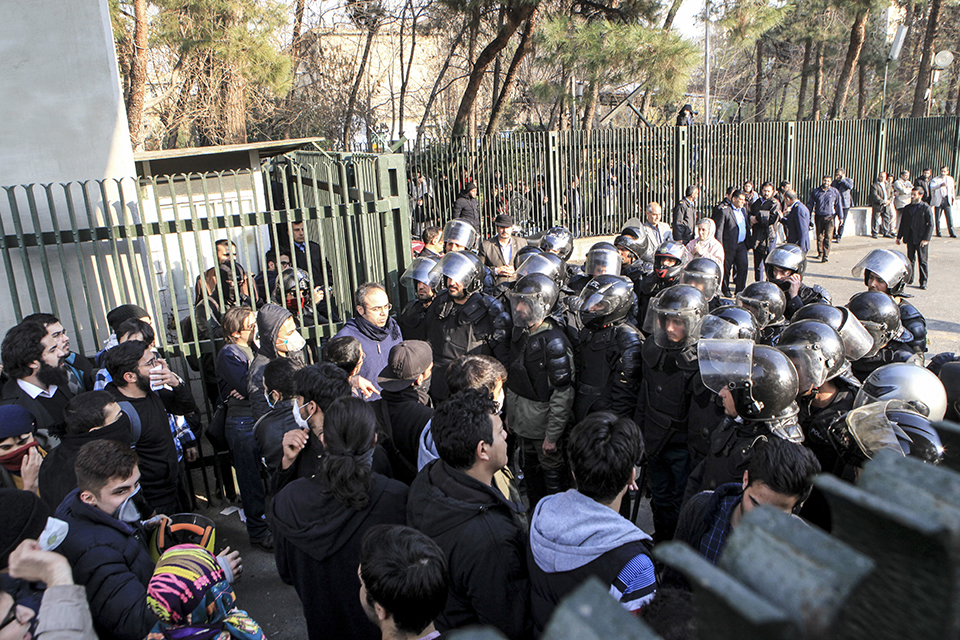 TEHRAN, Iran (AP) — Iran's supreme leader on Tuesday blamed the protests roiling the country on "enemies of Iran" who he said were meddling in its internal affairs, as state television reported that overnight clashes between protesters and security forces killed another nine people.

The demonstrations, the largest seen in Iran since its disputed 2009 presidential election, have brought six days of unrest across the country and resulted in at least 21 deaths.

The protests began Thursday in Mashhad over Iran's weak economy and a jump in food prices.

They have since expanded to several cities, with some protesters chanting against the government and the supreme leader, Ayatollah Ali Khamenei. Hundreds of people have been arrested and a prominent judge on Tuesday warned that some could face the death penalty.

In comments posted to his official website, Khamenei appeared to blame foreign nations for at least exacerbating the unrest gripping Iran.

"In the recent days' incidents, enemies of Iran utilized various means — including money, weapons, politics and intelligence apparatuses — to create problems for the Islamic system," he said, in his first public remarks since the demonstrations began.

Khamenei said he would elaborate further in the coming days. Iranian leaders often accuse the United States, Israel and Britain of seeking to overthrow the clerically overseen government.

State TV reported that six people were killed during an attack on a police station in the town of Qahdarijan. It said the clashes were sparked by rioters who tried to steal guns from the police station.

The towns are all in Iran's central Isfahan province, some 350 kilometers (215 miles) south of Tehran.

The semi-official Mehr news agency said an assailant using a hunting rifle killed a policeman and wounded three others in Najafabad.

President Hassan Rouhani has acknowledged the public's anger over the flagging economy, which has benefited from his signature 2015 nuclear deal with world powers, but not in a way that has brought immediate gains for most Iranians.

Rouhani and others have warned that the government wouldn't hesitate to crack down on those it considers lawbreakers. None of the protest rallies so far have received prior permission from the Interior Ministry, making them illegal.

U.S. President Donald Trump on Tuesday wrote on Twitter that "the people of Iran are finally acting against the brutal and corrupt Iranian regime."

"All of the money that President Obama so foolishly gave them went into terrorism and into their 'pockets,'" Trump wrote, apparently referring to the nuclear deal reached under his predecessor. "The people have little food, big inflation and no human rights. The U.S. is watching!"

It is unclear what effect Trump's string of tweets is having on the protests. Some have shared them online, but many in Iran distrust him because he has refused to re-certify the 2015 nuclear deal and his travel bans have blocked Iranians from getting U.S. visas.

Iran's Foreign Ministry spokesman Bahram Ghasemi urged the U.S. president to stop tweeting and focus on his own country's problems.

"It is better for him to try to address the U.S.' internal issues like the murder of scores killed on a daily basis in the United States during armed clashes and shootings, as well as millions of the homeless and hungry people in the country," Ghasemi said, according to the state-run IRNA news agency.

So far, authorities have not released a nationwide figure for arrests.

The head of Tehran's Revolutionary Court reportedly warned Tuesday that arrested protesters could potentially face the death penalty when they are put on trial.

"Obviously one of their charges can be Moharebeh," or waging war against God, Iran's semi-official Tasnim news agency quoted Mousa Ghazanfarabadi as saying. Moharebeh is punishable by death in Iran. He was also quoted as saying some protesters will come to trial soon on charges of acting against national security and damaging public property.

The protests began over Iran's economy, which has improved since the nuclear deal that saw Iran agree to limit its enrichment of uranium in exchange for the end of some international sanctions. Tehran now sells its oil on the global market and has signed deals to purchase tens of billions of dollars' worth of Western aircraft.

That improvement has not reached the average Iranian, however. Unemployment remains high, and official inflation has crept up to 10 percent again. A recent increase in egg and poultry prices by as much as 40 percent, which the government has blamed on a cull over avian flu fears, appears to have been the spark for the protests.