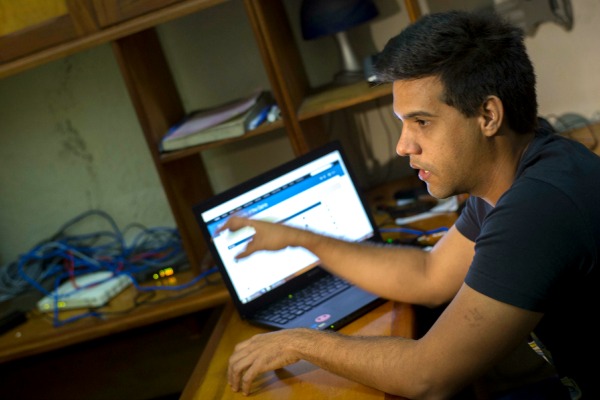 In this Jan. 4, 2015 photo, Rafael Antonio Broche Moreno talks during an interview with The Associated Press, next to his computer, modem and intranet network cabling at his home in Havana. Disconnected from the real Internet, the intranet network is limited, local and built with equipment commercially available around the world, with no help from any outside government, organizers say. (AP Photo/Ramon Espinosa)

Cut off from the Internet, young Cubans have quietly linked thousands of computers into a hidden network that stretches miles across Havana, letting them chat with friends, play games and download hit movies in a mini-replica of the online world that most can't access.

Home Internet connections are banned for all but a handful of Cubans, and the government charges nearly a quarter of a month's salary for an hour online in government-run hotels and Internet centers. As a result, most people on the island live offline, complaining about their lack of access to information and contact with friends and family abroad.

A small minority have covertly engineered a partial solution by pooling funds to create a private network of more than 9,000 computers with small, inexpensive but powerful hidden Wi-Fi antennas and Ethernet cables strung over streets and rooftops spanning the entire city. Disconnected from the real Internet, the network is limited, local and built with equipment commercially available around the world, with no help from any outside government, organizers say.

Hundreds are online at any moment pretending to be orcs or U.S. soldiers in multiplayer online games such as "World of Warcraft" or "Call of Duty." They trade jokes and photos in chat rooms and organize real-world events like house parties or trips to the beach.

"We really need Internet because there's so much information online, but at least this satisfies you a little bit because you feel like, 'I'm connected with a bunch of people, talking to them, sharing files," said Rafael Antonio Broche Moreno, a 22-year-old electrical engineer who helped build the network known as SNet, short for streetnet.

Cuba's status as one of the world's least-wired countries is central to the new relationship Washington is trying to forge with Havana. As part of a new policy seeking broader engagement, the Obama administration hopes that encouraging wider U.S. technology sales to the island will widen Internet access and help increase Cubans' independence from the state and lay the groundwork for political reform.

Cuban officials say Internet access is limited largely because the U.S. trade embargo has prevented advanced U.S. technology from reaching Cuba and starved the government of the cash it needs to buy equipment from other nations. But the government says that while it is open to buying telecommunications equipment from the U.S., it sees no possibility of changing its broader system in exchange for normal relations with the U.S.

Outside observers and many Cubans blame the lack of Internet on the government's desire to control the populace and to use disproportionately high cellphone and Internet charges as a source of cash for other government agencies.

Cuba prohibits the use of Wi-Fi equipment without a license from the Ministry of Communications, making SNet technically illegal. Broche Moreno said he believes the law gives authorities latitude to allow networks like SNet to operate. He described a sort of tacit understanding with officials that lets SNet run unmolested as long as it respects Cuban law — its hundreds of nodes are informally monitored by volunteer administrators who make sure users don't share pornography, discuss politics or link SNet to illicit connections to the real Internet.

"We aren't anonymous because the country has to know that this type of network exists. They have to protect the country and they know that 9,000 users can be put to any purpose," he said. "We don't mess with anybody. All we want to do is play games, share healthy ideas. We don't try to influence the government or what's happening in Cuba ... We do the right thing and they let us keep at it."

Users who break rules can be blocked from the network by their peers for as a little as a day for minor infractions such as slowing down SNet with file-sharing outside prescribed hours, with lifetime bans for violations like distributing pornography.

"Users show a lot of respect for preserving the network, because it's the only one they have," Broche Moreno said. "But me and the other administrators are watching things to make sure the network does what it's meant for."

The Cuban government did not respond to a request for comment on the network.

Before Obama moved to restore full diplomatic ties with Cuba, the U.S. made several attempts to leverage technology against the Cuban government. Contractor Alan Gross was sentenced to 15 years in prison after a U.S. Agency for International Development contractor sent him to Cuba to set up satellite Internet connections. He was freed after five years as part of the deal last month that paved the way for Obama's new Cuba policy.

Joining SNet requires resources out of reach of many people in a country where the average salary hovers around $25 a month.

Humberto Vinas, 25, studied medical technology and accounting before finding a relatively well-paying job in the kitchen of a bar. He and nine friends shared an SNet node for several months, running hundreds of feet of Ethernet cable over neighbors' roofs until one demanded they take it down, disconnecting most from the network.

"I miss SNet a lot," he said sadly. "You can find out about soccer scores. It allows you to do so much, right from your home."

Cubans have one of the hemisphere's highest average levels of education and years of practice at improvising solutions to scarcity, allowing many to access and share information despite enormous barriers. For as little as a dollar a week or less, many Cubans receive what's known as "the package," weekly deliveries of pirated TV shows, movies, magazines and instructional texts and videos saved on USB memory drives.

There is no obvious indication the U.S. or any other foreign government or group had anything to do with the creation of SNet, making it by far the most impressive example of Cuba's homemade telecommunications engineering.

The network is a series of connected nodes, powerful home computers with extra-strong Wi-Fi antennas that communicate with each other across relatively long distances and distribute signals to a smaller network of perhaps a dozen other computers in the immediate vicinity.

SNet started as a handful of connected users around 2001 and stayed that way for a decade. More than 9,000 computers have connected over the past five years, and about 2,000 users connect on an average day.

Many use SNet to get access to popular TV shows and movies. The system also stores a copy of Wikipedia. It's not necessarily current, but is routinely refreshed by users with true Internet access. There's also a homegrown version of a social network that functions similarly to Facebook.

Because most data passes from computer to computer in SNet, everything takes place much faster than on the achingly slow and expensive connections available from government servers that pass all information through central points.

Broche Moreno estimated it costs about $200 to equip a group of computers with the antennas and cables needed to become a new node, meaning the cost of networking all the computers in SNet could be as little as $200,000. Similar but smaller networks exist in other Cuban cities and provinces.

"It's proof that it can be done," said Alien Garcia, a 30-year-old systems engineer who publishes a magazine on information technology that's distributed by email and storage devices. "If I as a private citizen can put up a network with far less income than a government, a country should be able to do it, too, no?"

Copyright 2015 The Associated Press. All rights reserved. This material may not be published, broadcast, rewritten or redistributed